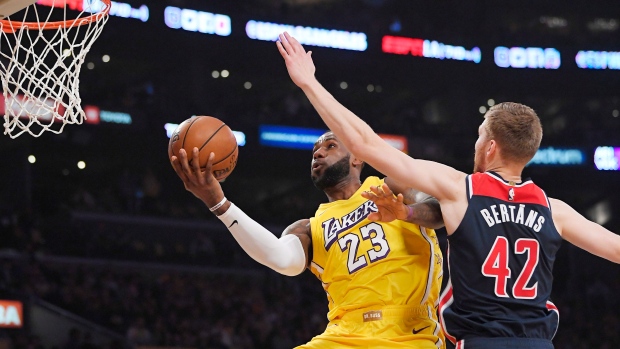 LOS ANGELES — Anthony Davis had 26 points and 13 rebounds, and LeBron James had 23 points and 11 assists before both superstars took the fourth quarter off in the Los Angeles Lakers’ 10th consecutive victory, 125-103 over the Washington Wizards on Friday night.

Quinn Cook scored 17 points and JaVale McGee had 15 points and 11 rebounds for the steamrolling Lakers, who have won 17 of 18 to soar to the top of the overall NBA standings. Los Angeles went 14-1 in November, posting the most victories in a month for this 16-time champion franchise since March 2000.

The up-tempo Wizards have been one of the NBA’s worst defensive teams this season, and the Lakers’ dynamic offence was far too much for them.

Los Angeles outscored Washington 84-36 during a 24-minute span extending from midway through the first quarter until James’ jumper midway through the third put the Lakers up 88-51. LA made runs of 17-0 and 18-0 during that one-sided stretch, showing off the remarkable chemistry already established in just the 19th game of the season for this newly minted superteam.

Bradley Beal had 18 points and nine assists for the Wizards, who have lost three of four. Washington got off to a solid start and had several good stretches against the Lakers, but committed 19 turnovers and lost for the second time in three stops on a four-game West Coast road trip.

Washington actually opened with a 15-4 lead before the Lakers woke up and put together 24 minutes of dominance.

Isaiah Thomas scored 10 points to lead the four former Lakers on Washington’s roster. Moe Wagner had seven points and eight rebounds, and the German big man also committed a flagrant foul on Dwight Howard, who responded by hitting both free throws and then dunking on Wagner’s head on the ensuing possession.

Wagner eventually went to the locker room favouring his left ankle with several minutes to play.

Howard had eight points, five rebounds and two blocked shots in his reunion with the Wizards, who signed him in July 2018. Howard played in just nine early games for Washington before a spinal injury forced him to miss the rest of the season, and his resulting long off-season of inactivity and soul-searching led to his decision to become a role player with the Lakers.

Washington coach Scott Brooks has been impressed by Howard’s evolution, saying Howard has been “exactly what” the Wizards hoped he would be for them: “Unfortunately, he was hurt. I have nothing bad to say about him. He worked hard for us, but just unfortunately didn’t have the health to make a difference for us.”

Wizards: G C.J. Miles is out until at least next week with a left wrist ligament injury. He also missed Thursday’s game at Phoenix. Brooks didn’t speculate on the severity of the injury. ... Brooks’ jersey will be retired at UC Irvine on Saturday. The Northern California native spent two high-scoring seasons with the Anteaters from 1985-87 before his decade as an NBA player. “It’s humbling,” Brooks said. “It’s awesome. I love Irvine. It’s a terrific school.”

Lakers: Avery Bradley will be re-evaluated this weekend in his return from a hairline fracture in his right leg. The veteran has missed eight games. ... Kyle Kuzma limped off the court at the third-quarter buzzer badly favouring his right ankle. He returned to the game for the fourth, but left for the locker room later in the quarter.

Wizards: Stay in town to face the Los Angeles Clippers on Sunday.