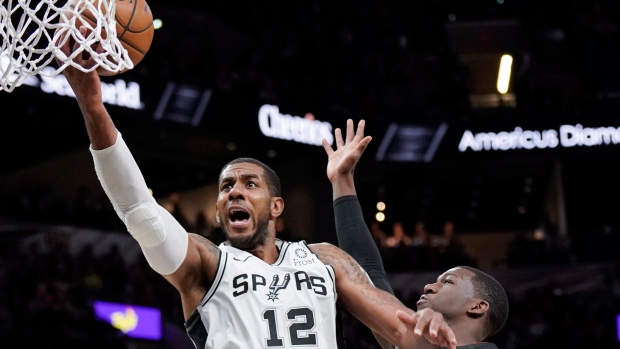 SAN ANTONIO — Patty Mills celebrated his heritage Sunday with a performance that typified his career.

The win came as San Antonio became the first NBA team to hold Indigenous People Night — a meaningful cause to Mills, who is an Australian of aboriginal descent.

“It’s an important night and it’s really important to Patty,” San Antonio coach Gregg Popovich said. “For the indigenous people here in Texas it’s important to all of us, but it’s sort of double for him because of his history and his background.

"He didn’t play like he did because of that; he does that every night. His energy has been there his whole career. It’s who he is.”

Mills requested the Spurs honour his ancestry as well as those of Native Americans, and the franchise obliged on the eve of Martin Luther King Day.

Miami's Duncan Robinson missed a 3-pointer with 10.2 seconds left and the Heat trailing 105-102. Miami fouled Marco Belinelli, who made both free throws to cap the scoring.

“It’s a big moment,” Robinson said. “I want to make that shot for this team. I didn’t do it. I’m disappointed in myself, but it’s nice to know these guys have my back no matter what.”

Bam Adebayo had 21 points, 16 rebounds and six assists for Miami, which had won its previous two games. Goran Dragic added 19 points and Kendrick Nunn had 18.

“I actually liked the way we competed,” said Heat forward Jimmy Butler, who had 16 points.

The Spurs rebounded — barely — after blowing a 14-point lead in the fourth quarter against Atlanta in a 121-120 defeat Friday.

“We fresh off a feeling of letting a game slip away from us,” DeRozan said. “Being right back in that position, just kind of understanding how hard we needed to play down the stretch, how hard it was going to be."

Mills fueled a late run by diving out of bounds and throwing the ball off Miami centre Meyers Leonard to salvage an offensive possession. With cheers of “Patty, Patty,” still ringing throughout the AT&T Center, Aldridge drained a hook shot to pull the Spurs within 98-97 with 4:39 remaining.

A few possessions later, Derrick White used a backhanded stab to deflect and steal an attempted entry pass at the top of the key by Adebayo. That led to a three-point play by Aldridge for a 102-98 lead with 3:20 remaining.

“It was a big play," White said. "I was just trying to be active, get my hands on the ball and make a play."

Heat: G Tyler Herro missed the game with a bruised left knee. ... F James Johnson was limited to five points in 15 minutes after helping Miami win for just the fourth time ever in San Antonio last season. Johnson had 13 points, five rebounds, four assists and two steals in the Heat’s 110-105 victory March 20, 2019. ... Leonard was the only starter not to score in double figures, but he had six rebounds and two assists and was a plus-7 on the court along with five points.

Spurs: Rudy Gay missed his second straight game with an undisclosed illness. ... Mills is the 110th player in league history with 1,000 3-pointers and just the 18th second-round pick to do so.

Mills is just the third indigenous player to compete for Australia in the Olympics. He has been active in assisting his homeland throughout his NBA career, especially with the country ravaged recently by brush fires. His work with the indigenous people of Australia led him to become active with the Native American population in Texas.

“He’s just a caring individual," Popovich said of Mills. "He cares about people, this was something that fit perfectly for him and his interests that’s why he carried through with it and tried to bring attention to it.”

Spurs: At Phoenix on Monday night.