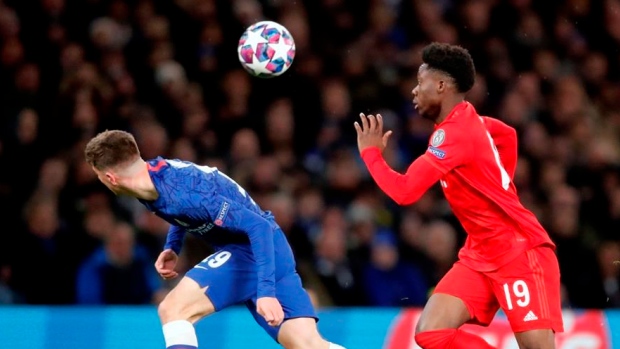 GENEVA — The remaining four games of the Champions League's round of 16 can be hosted by the home team, UEFA announced Thursday, instead of playing them in neutral Portugal.

The competition was halted in March because of the coronavirus and is set to conclude with a mini-tournament at an empty stadium in Lisbon next month, starting with the quarterfinals.

However, Barcelona, Bayern Munich, Juventus and Manchester City will be allowed to host the second leg of their last-16 matches at home.

UEFA confirmed Thursday it had clearance from public authorities in Spain, Germany, Italy and England to let the teams play at home on Aug. 7 and 8. Few or no fans will be allowed in the stadiums.

UEFA also said no tickets will be sold to fans for mini-tournament in Lisbon.

“In light of the current situation, the UEFA executive committee felt it prudent to conclude that UEFA matches should take place behind closed doors until further notice,” the governing body said.

In the Europa League, six clubs including Manchester United can also host their outstanding second-leg games in the round of 16 ahead of a mini-tournament in Germany.

Starting on Aug. 12, the Champions League quarterfinals will be played on four straight nights in single-leg knockout games at the home stadiums of Benfica and Sporting Lisbon.

In the remaining round-of-16 games, Bayern is the clearest favourite to advance having won 3-0 at Chelsea in the first leg in February.

Man City leads 2-1 over Real Madrid, Juventus trails 1-0 against Lyon, and Barcelona resumes at 1-1 against Napoli.

The quarterfinals and semifinals pairings will be drawn Friday at UEFA headquarters.

The final was postponed from May 30 at the Ataturk Olympic Stadium in Istanbul. It will host the 2021 final.

In the Europa League, six second-leg games will now be hosted on Aug. 5 and 6 by Man United, Bayer Leverkusen, Shakhtar Donetsk, Wolverhampton, Basel and Copenhagen.

The first-leg games were played in March with four in empty stadiums. Only Istanbul Basaksehir and Rangers had fans in the stands for games against Copenhagen and Bayer Leverkusen, respectively.

The two remaining pairings — Inter Milan-Getafe and Sevilla-Roma — could not be played in Italy or Spain in March as those countries were hit hard by the spreading coronavirus. Those pairings will be settled in single knockout games in neutral Germany, also on Aug. 5 and 6.

The quarterfinals are scheduled for Aug. 10-11 in Cologne, Duisburg, Düsseldorf and Gelsenkirchen. The semifinals are Aug. 16-17.

The final is Friday, Aug. 21 in Cologne, replacing the postponed May 27 final in Gdansk, Poland.