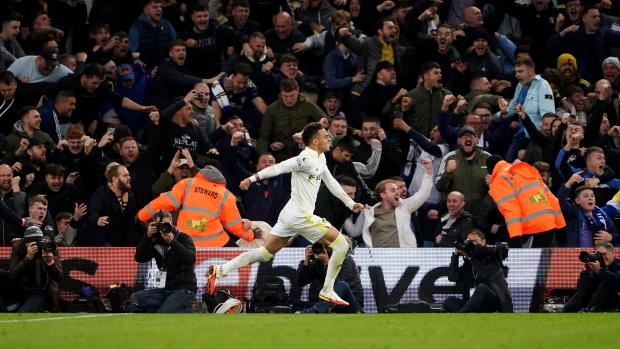 LEEDS, England (AP) — Spain striker Rodrigo converted a penalty in the fourth minute of stoppage time to earn Leeds a 1-1 draw against Wolverhampton in the Premier League on Saturday.

Trailing to South Korea forward Hwang Hee-chan's fourth goal in six league games since his loan move from Leipzig, Leeds also lost key player Raphinha to injury early in the second half but finished strongly and was awarded a penalty when substitute Joe Gelhardt was pushed over.

Hwang converted from close range in the 10th minute to continue his strong start to life in English soccer and set Wolves on course for a fourth straight win in the league.

Leeds' chances of an equalizer were hit when Raphinha was helped down the tunnel at Elland Road in the 54th after appearing to hurt his left ankle following a challenge from Wolves defender Romain Saiss.

The right winger, who recently forced his way into the Brazil team, looked in pain and was seemingly unable to put full weight on his ankle.

Leeds dominated the final 25 minutes without its best player and was rewarded with a bright display by Gelhardt, a highly rated 19-year-old forward whose mazy dribbles troubled Wolves' defense. One of them saw him bundled over by Nelson Semedo and Rodrigo converted the penalty, before snapping the corner flag with a celebratory kick.