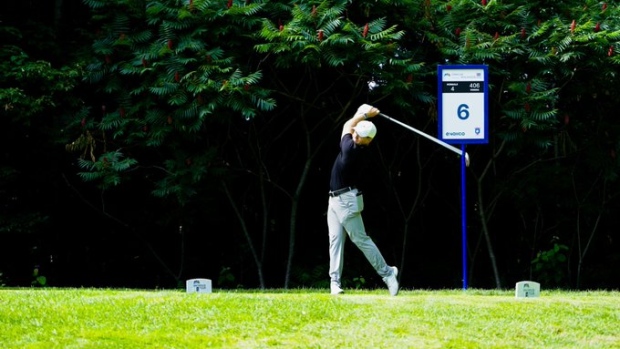 BLAINVILLE, Quebec—Blair Bursey battled through windy conditions Friday afternoon at Club De Golf Le Blainvillier making the turn at 1-over. But things turned around on his back nine as the Gander, Newfoundland, native made an eagle on the par 5 second hole before adding three more birdies. The strong finish to his round has him back in the lead, at 10-under, at the halfway mark of the Mackenzie Investments Open. He leads Keven Fortin-Simard by two shots.

“Just letting the round come to me,” said Bursey of how he treated his day. “I didn’t really start pressing, I just happened to catch a run. The holes that were downwind I was able to take advantage of.”

Bursey has put together back-to-back solid rounds in vastly different weather conditions after posting a 66 Thursday in the rain.

“It’s obviously good for the confidence,” said Bursey. “When the weather changes it might require some different skill sets be it mentally or physically.”

Playing in his home province, Fortin-Simard made eight birdies, contributing to a 5-under round of 67 for the Chicoutimi native.

The round was a bit of a roller coaster for the 35-year-old, as he made four birdies and two bogeys over the first six holes before finally making a par on seven.

“Yeah, it was a bit of a mess,” joked Fortin-Simard. “[Thursday] was just free-flowing, really, and kind of easy on the swing, but today it took me a bit of time. But I rolled the ball nice and kept it together.”

Starting in the first group of the day, Fortin-Simard took advantage of the calm conditions, managing to post a low score before the wind picked up significantly on a blustery afternoon.

“I’ll take rain [Thursday] afternoon with the morning we had instead of flipping it around and having the wind this afternoon. But one thing’s for sure—the course will definitely play a bit different over the weekend, so that’s one thing to keep an eye on.”

Aurora, Ontario’s Marc Casullo played well for the second day in a row, posting a 2-under 70, placing him in third, four shots back of Bursey heading into the weekend.

“For me it was just getting out there as early as I can, make a few birdies and then the back nine got really windy so it was just hold on for dear life and make sure you hit good shots off the tee,” said Casullo. “My game is very positional golf, and this course is allowing me to do it, and everyone’s got to play from the same spot.”

The third round begins on Thursday morning at 7:30 a.m. EDT

The only two players to shoot consecutive rounds in the 60s to begin the Mackenzie Investments Open are the two at the top of the leaderboard—Blair Bursey and Keven Fortin-Simard. Four others have posted two under-par rounds: Marc Casullo, Chris Wilson, Brendan Leonard and Jesse Smith.

Vaita Guillaume last played on a PGA TOUR-affiliated Tour in 2017, when he finished 63rd on the final Order of Merit. Guillaume, who played college golf in the U.S., at Campbell University in North Carolina, has also seen action on PGA TOUR Latinoamerica, the Mackenzie Tour and the PGA TOUR.

Former Montreal Canadien Donald Audette missed the cut. The amateur finished at 13-over after rounds of 79-78.

The biggest improvement from one day to the next belonged to David Byrne. After a disappointing, 3-over 75 to start, he shaved eight strokes off that score with his second-round 67. He is alone in eighth.

“It’s really difficult to follow up a really good round like I had [Thursday] with another one. So, whenever that happens I’m definitely pretty conscious to let things come to me as opposed to trying to fire at every flag.” – Blair Bursey

“It was tricky out there today. At times, it was a two-to-three-club wind, I’m glad to be done early in the day.” – Marc Casullo

“I didn’t even know I made eight birdies today. I was just plotting along trying to hit one shot at a time. I know it’s a little cliché to say, but it seems to have worked well today.” – Keven Fortin-Simard

“That’s why I keep playing, to give myself chances and play amongst the leaders on the weekend. There’s nothing better than playing golf with that feeling of stress and adrenaline.” – Keven Fortin-Simard