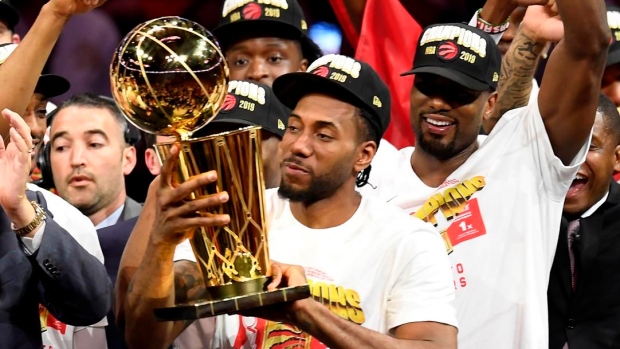 Now that the NBA season has come to an end, the Larry O'Brien Championship Trophy has been handed out and the parade has wrapped up, it’s time for Kawhi Leonard to focus on his future in what promises to be a monumental off-season.

While the rumours have been swirling about his free agency since he was acquired by the Raptors, Leonard said just a few weeks ago that he wasn’t giving his big decision any thought.

"I’m not even thinking about signing or what team I’ma go to ..."

Leonard points out that although at the time of the interview (June 7) he wasn’t thinking about free agency, he knows what he wants. But what does that mean?

ESPN Senior NBA Insider Adrian Wojnarowski spoke with Get Up Tuesday morning, pointing out what Kawhi might have meant by that statement.

Woj said that one thing Kawhi Leonard knows is that he wants is to be in Los Angeles.

With the Lakers recently trading for Anthony Davis, it is believed that they remain heavily interested in the 2019 NBA Finals MVP. But Wojnarowski believes Leonard’s L.A. focus is on the Clippers, not the Lakers.

When LeBron James makes a basketball decision, it’s probably a smart idea to study it and learn from what he’s done.

James didn’t sign a max contract in his 2014 return to Cleveland, instead signing a two-year deal with a player option in the second year. He repeated that process in 2015, and sign a three-year deal in 2016 with an option for the third year. James did not exercise his option in 2018 and signed a four-year $153.3 million contract with the Lakers.

That’s something Leonard can explore if he wants to stay with the Raptors without making a long-term commitment.

A two-year deal with a player option could also benefit Leonard financially down the road. Getting back together with the Raptors would give the team a chance to repeat, and ESPN’s Brian Windhorst points out that if Leonard takes this route, “He could make potentially tens of millions more if he signs a long-term deal in 2021.”

Windhorst has also pointed out that cashing in for big money isn’t a main priority for Leonard. He left big money on the table before when he forced his way out of San Antonio and not signing a supermax deal with the Spurs, leaving $80 million on the table.