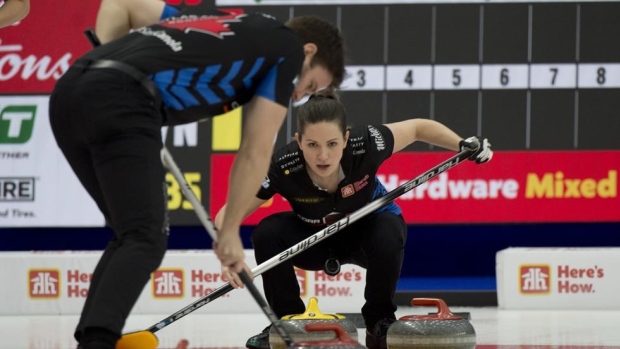 Scratch two big names off the curling free-agent frenzy board.

Laura Walker and Kirk Muyres will be "focusing completely" on the mixed doubles discipline over the next quadrennial as they aim to represent Canada at the 2026 Milan Olympics.

"Ultimately I just had a hard time getting really excited about anything other than mixed doubles with Kirk," Walker said. "When he decided to go the same route, it just felt right."

Walker's four-player team announced last week that the players would go their separate ways next season. Muyres, who plays second for Matt Dunstone, was in a similar position after his team announced this campaign would be its last.

"We've always had fun and we've always kind of joked, 'Why don't we just play this?'" Walker said of mixed doubles. "Every time we go out we have such a ton of fun, and we finally pulled the plug."

Walker and Muyres were both regulars at the national team championships but neither player made it to the top of the podium.

However, they won a Canadian title at the 2018 mixed doubles playdowns and took world bronze later that year. Walker and Muyres also won national silver in the discipline in 2016 and added bronze in 2019.

"We have noticed a transition in the mixed game over the last couple of years and a need for a heightened focus and commitment if we want to be the best in the world," Muyres said in a statement.

"We are excited to now be able to make that commitment to work towards being the best we can be in mixed doubles and help Canada win on the world stage."

Canada did not reach the podium at last year's world championship and missed the playoffs altogether at the recent Beijing Olympics.

Walker and Muyres are ranked 11th in Canada.

"I think we are hoping to maybe be part of a change in that. I think that we're quite happy with where we've ended up."

Spain will serve as a replacement for the Russian entry at next month's world mixed doubles curling championship.

China has also withdrawn from the April 23-30 playdowns in Geneva due to ongoing travel restrictions related to COVID-19, the WCF said Wednesday in a release.

Like Spain, Denmark got the nod to fill the vacancy as the highest-ranked team not previously qualified.

Scotland will replace Russia in the women's competition at the May 15-22 world junior curling championship in Jonkoping, Sweden. South Korea will be the replacement team in the men's draw.

The hosts of the "Inside Curling" podcast apologized for comments that suggested Brier champion Brad Gushue was trying "to convince" Curling Canada to change its residency rule for his team's benefit.

"It came out a little incorrect in the fact that it sounded like I was suggesting it was Brad trying to do this just for himself," co-host Warren Hansen said on this week's episode. "And no, he's trying to get it changed for the entire sport of curling and I think most of the top players in the game are.

"So if that came out incorrectly, we apologize, but it was not what we meant."

On last Friday's episode, Hansen and co-host Kevin Martin mentioned Team Gushue's addition of E.J. Harnden as an alternate and second Brett Gallant's plan to leave the team at the end of the season.

Martin said the team was trying to pick up Harnden at second but the federation's residency rule limiting teams to one import player was an issue.

"Brad, I think now, is trying to convince Curling Canada to adjust the rule to do something for them on their behalf,'' Hansen said on the podcast. "But to some degree, it's a problem.''

In a weekend interview with The Canadian Press, Gushue said it was "completely inaccurate, reckless and stupid for them to say that because that's not the case at all."

Gushue added his only interaction with Curling Canada came "months ago" when he asked what the future plans for the residency rule might be. At no time did he lobby or push for a change, he said, adding his team will "follow the residency rules no matter what they are."

This report by The Canadian Press was first published March 23, 2022.