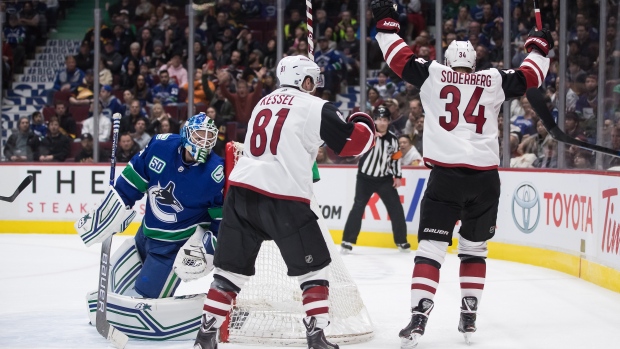 VANCOUVER — The Arizona Coyotes refused to roll over.

The Coyotes gave up a third-period lead but stormed back with three goals of their own to defeat the Vancouver Canucks 4-2 Wednesday night to tighten the playoff race in the NHL's Western Conference.

Lawson Crouse scored the winning goal for Arizona just 2:29 after Nick Schmaltz had tied the game.

"We're a desperate group and we're playing some desperate hockey right now," said Crouse, who scored his 15th goal of the year by tipping in an Oliver Ekman-Larsson point shot at 12:39 of the third

"We held our composure. We just got pucks to the net and stayed around the net and they went in for us."

"That's a good burst of energy for our group," said Crouse.

Carl Soderberg had a goal and an assist for the Coyotes (33-27-8), who have won two in a row and three times in four games. Ekman-Larsson added an empty-net goal to go with an assist.

Tyler Toffoli and Tanner Pearson scored goals less than three minutes apart to give Vancouver a 2-1 lead at 6:16 of the third. The Canucks (34-26-6) lost their fourth consecutive game.

With 14 games remaining, the Coyotes know they have little margin for error in their quest for a playoff spot. Arizona's road trip continues with games in Calgary on Friday and Winnipeg on Monday.

"We talked about this road trip, that we need these points, they are huge, chasing these teams in the standings," said Schmaltz, who scored his first goal in 15 games.

"It was kind of do or die and I thought we battled hard. We were just able to make that one more play."

Arizona goalie Darcy Kuemper made 36 saves. He had a busy second period, stopping Jake Virtanen on a breakaway, blocking a Toffoli drive from the face-off circle and stopping a tip on a power play.

"You could sense the urgency right from the start," said Kuemper. "I thought we weathered the storm well and just stayed patient with our game and didn't really go away from it regardless of what was happening out there."

Head coach Rick Tocchet said it was a team win.

"It was one of those game you've got to do whatever it takes to win," he said. "Everybody kind of contributed tonight. It's a nice win."

It was a tough loss for the Canucks, who gave up a two-goal lead with eight minutes left in a 5-3 defeat to Columbus on Sunday.

"These third periods lately, we are kind of shooting ourselves in the foot," said Pearson. "We need to be the opposite. We need to put our foot down and stomp on their throats."

Captain Bo Horvat said there's no excuse for giving up late leads at this time of the year.

"Honestly, it's unacceptable on our part," he said. "We have to be better in that area, especially down the stretch.

"We're done making excuses for ourselves. We have to bear down when we're up and protect leads."

The Coyotes led 1-0 after 40 minutes on the strength of a strange first-period goal.

With the Coyotes on a power play, Soderberg ran into Canuck defenceman Oscar Fantenberg behind the net. The puck flipped into the air and over goaltender Thatcher Demko's shoulder into the net.

Demko ended the night with 36 saves.

There were also some anxious moments in the second period when Demko ventured out of his net and was knocked down in a collision with Arizona's Taylor Hall and Canuck defenceman Chris Tanev. Demko looked to be in pain but stayed in the game after the training staff examined his left leg.

"This one will sting for a while and that's all right," he said. "When you are playing games late in the year like this that matter, it's unfortunate that we didn't win."

NOTES: Canuck rookie defenceman Quinn Hughes dressed despite missing the Wednesday morning skate and skating by himself on Tuesday. … Vancouver defenceman Tyler Myers didn't dress after missing practice Tuesday but skating Wednesday morning. … Oscar Fantenberg drew into the lineup to replace Myers. … Coyote defenceman Jakob Chychrun is listed as day-to-day with a lower-body injury but could join the team later on their three-game road trip. … Vancouver has recalled defenceman Guillaume Brisebois and Jalen Chatfield under emergency conditions from their AHL farm team in Utica.