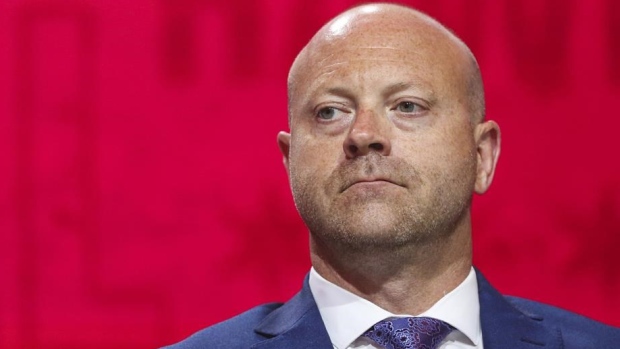 A lawyer for a former Chicago Blackhawks player has asked the U.S. Center for SafeSport to investigate Blackhawks and U.S. Olympic men’s hockey team general manager Stan Bowman for allegedly covering up the sexual abuse of two former Blackhawks players.

Chicago lawyer Susan Loggans requested an investigation of Bowman’s alleged actions in an email on Thursday to Dennis Lovatto, an intake coordinator with SafeSport.

“As you know,” Loggans wrote in her email, “I represent two sexual assault victims who were attacked by [former Blackhawks video coach] Brad Aldrich. I am officially requesting an investigation into a coverup of these sexual assaults by Stan Bowman, an NHL team official who also holds a position of major influence with USA Hockey.”

The Blackhawks and U.S. Center for SafeSport did not respond to emails requesting comment.

Lovatto contacted Loggans by email on June 29 to inform her that the centre had received a report concerning Bowman’s alleged misconduct that her client, the former Blackhawks player, may have witnessed, or personally experienced.

The U.S. Olympic Committee created the U.S. Center for SafeSport in 2012 and the centre became an independent organization in March 2017. Based in Denver with its own staff and a $10 million annual budget, the centre has exclusive jurisdiction in the U.S. to investigate and pass judgment on accusations of misconduct in Olympic and Paralympic sports.

According to the centre’s Code, “the privilege of participation in the Olympic and Paralympic movement may be limited, conditioned, suspended, terminated or denied if a participant’s conduct is or was inconsistent with this Code or the best interest of sport and those who participate in it.”

The Code lists nine forms of prohibited conduct, including misconduct related to reporting.

“An adult participant who fails to report actual or suspended sexual misconduct or child abuse to the Center and, when appropriate, to law enforcement may be subject to disciplinary action under the Center’s resolution procedures and may also be subject to federal or state penalties,” the Code says.

“I believe the Center has an obligation and the purview to investigate these allegations of serious wrongdoing because of its connection to the U.S. Olympic Committee, and federal funding of USA Hockey,” Loggans wrote in her email to Lovatto, adding that according to the U.S. Olympic Committee’s tax return, USA Hockey received $1,649,251 worth of grant money from the U.S. federal government in 2019.

“Have you considered whether Mr. Bowman should be placed on administrative leave from USA Hockey unless and until he's cleared by a truly independent investigation as opposed to not one commissioned and paid for by the Blackhawks?” Loggans wrote.

The Blackhawks have hired Chicago law firm Jenner & Block to investigate the allegations, even though the team in legal documents said it already investigated and found the claims to be without merit. The team’s chief executive, Danny Wirtz, has promised in a memo to Blackhawks employees to make Jenner & Block’s investigation findings public, The Athletic reported on Aug. 2.

The former Blackhawks player alleges he was sexually assaulted by Aldrich during the 2009-10 postseason and that after team executives were told about the incident, they refused a request to fire Aldrich and go to police to file a report.

After Aldrich left his job with the Blackhawks in the summer of 2010, he worked as a volunteer coach with a high school hockey team in Houghton, Mich. He was convicted of sexually assaulting a then-16-year-old player on that team in 2013 and sentenced to nine months in prison and 60 months of probation.

The former high school player alleges that the Blackhawks provided Aldrich with a positive job reference when he left the NHL team.

In an interview with TSN, former Blackhawks skills coach Paul Vincent said that in May 2010, the two Chicago players who were allegedly assaulted by Aldrich asked him to request that the team fire Aldrich and report the incident to police.

Vincent said he made that request during a meeting with Bowman, team president John McDonough, vice-president of hockey operations Al MacIsaac and team sports psychologist James Gary. Vincent said his request was denied.

Loggans also pointed out that Aldrich, a registered sex offender, is not listed on the center’s public database of sanctioned coaches.

“How is it that the Center still has not added Aldrich's name to the list of sanctioned/banned coaches?” Loggans wrote. “I understand that in 2013 Aldrich was not a member of USA Hockey. I guess high school hockey teams operate apart from that organization. But still, knowing he's a convicted sex offender, you're not going to add him to that database?”

Hockey coaches have been sanctioned for offences such as “sexual misconduct involving a minor; social media and electronic communication,” “Physical and emotional misconduct,” “Bullying; Abuse of process,” and “Criminal disposition.

According to the database, three people have been suspended and placed on probation for failure to report sexual abuse, including two individuals affiliated with the U.S. Equestrian Federation and one with USA Boxing.

In a June 12 email to TSN, USA Hockey spokesman Dave Fischer wrote that Aldrich is permanently banned by the organization but isn’t on the centre’s database because when he was convicted in 2013, he was not affiliated with USA Hockey.

(Aldrich was a video coach on the 2010 U.S. Olympic team. On his resume, a copy of which was obtained by TSN from Miami University via a Freedom of Information request, Aldrich wrote that he also worked with the U.S. Women’s national hockey program in Colorado Springs beginning in November 2010 after he left his job with the Blackhawks.)

“We were aware of the Aldrich arrest in 2013,” Fischer wrote. “At the time he was not a member of USA Hockey and the abuse occurred in a non-USA Hockey program, which we had no jurisdiction over. We have never had any reports of abuse or misconduct regarding Aldrich. Had he attempted to become involved after his conviction in any USA Hockey programs involving minors, he would have been required to complete a background check, and a sexual offender registration would have prohibited his registration or involvement.”

Fischer wrote that USA Hockey has submitted Aldrich’s name to be added to the U.S. Center for SafeSport’s database.