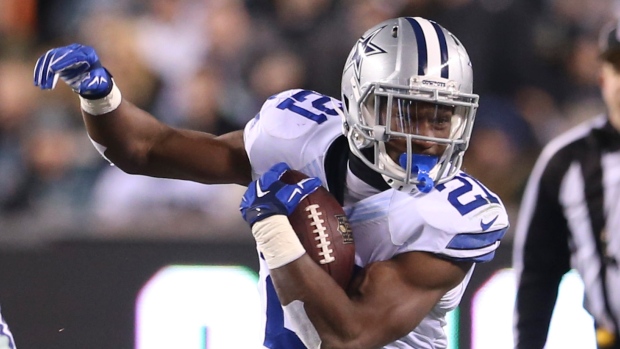 DALLAS - Joseph Randle's attorney denies that the Dallas Cowboys running back threatened his former girlfriend or pulled a gun during an incident that led to his arrest on a marijuana possession charge that was later dropped.

Randle was arrested on the drug charge at a hotel in Wichita, Kansas, on Tuesday after the 22-year-old mother of Randle's child called 911 to report a domestic disturbance. Dalia Jacobs filed for a protective order the next day, claiming Randle pointed a gun at a vehicle with their son and Jacobs' friend inside.

Attorney Gary Ayers said in a statement Saturday that Randle believes Jacobs' allegations "have no merit," including claims that he has a violent temper and a history of abusing her physically and emotionally.

The marijuana charge against Randle was dropped Friday, but police have said more charges could come from the investigation. No charges related to domestic violence have been filed.

Ayers said Randle was at a party and asked Jacobs to leave but she refused.

"Contrary to the woman's allegations, Randle did not threaten her or brandish a gun at any time," said Ayers, who also said he planned to contact Wichita police with an offer to co-operate in the investigation.

Charlie O'Hara, the attorney for Jacobs, said she has spoken to police multiple times and done media interviews. Ayers said he has advised Randle not to discuss the incident.

"Our client swore under oath to the facts of the incident," O'Hara said. "Mr. Randle only speaks through his attorney. If he truly has not done anything against the law, why doesn't he talk to the media?"

In the protective order, Jacobs said Randle retrieved a gun and threatened to "blast the vehicle" with their son inside. She said Randle first pointed a gun at her friend and smashed the windshield of the car with his fist, "causing glass to shatter across my friend and my child."

No gun was found at the scene, and police said they were told that another man left the scene with a gun.

It was the second arrest since October for Randle, who faced a misdemeanour shoplifting charge at a Dallas-area mall after police in the suburb of Frisco say he was accused of taking $123 worth of cologne and underwear from a department store.

Randle is the backup to 2014 NFL rushing leader DeMarco Murray, who is set to become a free agent. Randle had 343 yards rushing and three touchdowns in his second season. A fifth-round draft pick in 2013 after skipping his final season at Oklahoma State, Randle has two years remaining on his four-year, $2.3 million rookie contract.