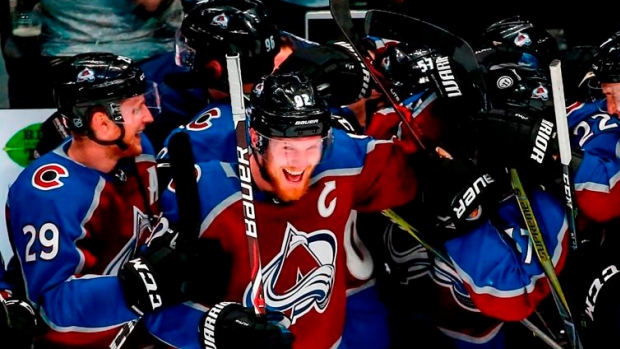 DENVER — There were moments in such a sour season a year ago when Gabriel Landeskog doubted himself as a player. It just wore on him that much.

Never once did he ever question this: His ability to lead the Colorado Avalanche.

The longtime captain who's still just 25 galvanized a youthful squad this season through dinners, pingpong games, stepping into the role of mentor, assisting on one of the best lines in hockey, getting feedback from fellow veterans and even being a tour guide. His teammates have followed Landeskog's lead straight into the post-season.

"Sometimes, you can doubt the things you're doing as a captain or if you're doing it right, but never if I wanted to be a captain," explained Landeskog, whose team opens the first round Thursday night in Nashville against the top-seeded Predators. "That's an honour. That's a privilege."

Naturally, there have been growing pains along the way for Landeskog, who was appointed captain on Sept. 4, 2012, at the tender age of 19 years, 286 days.

"When it's going that bad, when you're that bad of a team, no doubt you start doubting yourself, as a player and as a person," said Landeskog, a Swedish winger who was drafted by Colorado with the second overall pick in 2011. "At the end of the day, you have to believe in yourself and find that inner confidence and believe that you can do it and you are good and that you are doing the right things and stick with it."

It set the stage for a major turnaround. Their 47-point improvement this season is the tied for the fourth-highest year-to-year improvement in NHL history for a full season.

"I don't think I've ever been a part of a group with such team chemistry," said Landeskog, who helped seal the playoff appearance with a goal and two assists in a 5-2 win over St. Louis last weekend during a winner-take-all, regular-season finale.

That chemistry began in training camp. It escalated even more nearly 5,000 miles away in Stockholm, Landeskog's hometown. Colorado took a trip there in November to play two games against Ottawa. Right before that, the Avs made a three-team trade that sent Matt Duchene to the Senators and got them such players as defenceman Samuel Girard from Nashville in return.

While in Sweden, Landeskog became a tour guide. He set up museum excursions and organized dinners at his favourite spots. Although the Avalanche dropped both games, they found something greater — cohesion.

"We really came together as a team," Landeskog said. "There's something about spending five or six days with the team and nobody has family or friends or other obligations. It's just team, team, team and that's it."

Team dinners on the road have been frequent. Pingpong games began happening (Landeskog keeps a paddle with a picture of himself taped on it in his locker). And lines of communication that have always been open are even more open.

"He's very selfless. He doesn't care about his own personal numbers," standout Nathan MacKinnon said. "He's definitely the perfect captain for this team."

He's just trying to be his even-keeled self.

"I have a support staff — my fiance, my dad and my family and things like that to support me and try to bring me up when I'm down," Landeskog said. "It's just something that's always been engrained, to keep working and keep doing the right things, keep being a good teammate, to be a good example for other guys, and guys will follow."

He's had a solid season with 25 goals and 37 assists. Then again, it doesn't hurt to play on a line that includes MacKinnon and Mikko Rantanen.

"He leads the way on the ice and rarely does any mistakes," Rantanen said. "The way he speaks to the team is so calm. He's a role model for young guys."

Landeskog already is in full playoff mode with his beard game. He started growing it months ago, with the Avalanche trying to claw their way into the post-season. It's a contrast to, say, defenceman Nikita Zadorov, who hardly even has a whisker.

"Zadorov brought me over close to him before practice and was like, 'Look I got some (whiskers). I got some,'" Landeskog recounted. "I walked up there close to him, and there wasn't a whole lot to brag about."

A light-hearted mood — that's where the team is at heading into a playoff series as a decided underdog.

"Standing here after a season like this, I think you can look around the room and say everybody had a bounce-back season," Landeskog said. "Ultimately, everybody in this room helped this team get to the playoffs."