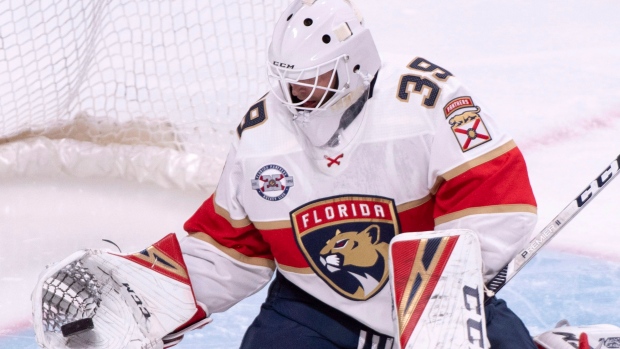 The Toronto Maple Leafs have acquired veteran goaltender Michael Hutchinson from the Florida Panthers for a fifth-round pick in 2020, the club announced on Saturday.

.@SportChek Player Alert: The @MapleLeafs have acquired goaltender Michael Hutchinson from the Florida Panthers in exchange for Toronto’s fifth-round pick in the 2020 NHL Draft.

The native of Barrie, Ont. has appeared in four contests with the Panthers this season, posting a 1-1-2 mark with a 4.17 goals against average and a save percentage of .839. Signed as a free agent last summer, the 28-year-old Hutchinson has started eight games for their American Hockey League-affiliate Springfield Thunderbirds.

Originally taken with the 77th overall selection of the 2008 NHL Entry Draft by the Boston Bruins out of the Ontario Hockey League's Barrie Colts, Hutchinson spent the last five seasons with the Winnipeg Jets organization, winning 21 games in 2014-15.

Earlier on Saturday, the Leafs called up goaltender Kasimir Kaskisuo on an emergency basis from the AHL Toronto Marlies to back up Garret Sparks as starter Frederik Andersen is day-to-day with a groin injury.

The Leafs were 4-2 winners on Friday night against the Columbus Blue Jackets and host the New York Islanders on Saturday night at Scotiabank Arena.