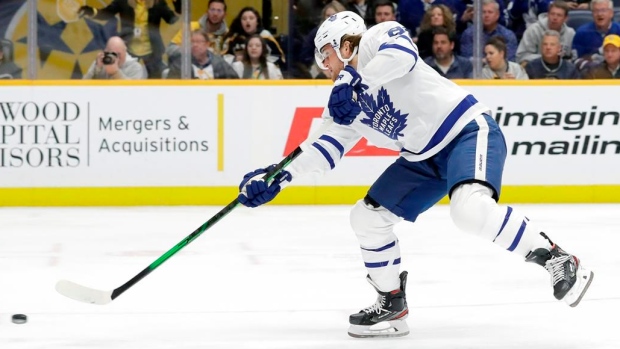 TSN Toronto Reporter Mark Masters reports on the Maple Leafs, who held an optional skate at the Saddledome in Calgary on Tuesday ahead of tonight’s game against the Flames.

"We've had some good opportunities and at times probably haven't capitalized," Tavares said. "There's still some room for growth. We feel we can still be a lot better and be a lot more productive. But we're doing a lot of good things, a lot of little things that you hope over time will pay off."

The Leafs are looking to tighten up defensively this season and finding a way to do that and let the offence flow is still a work in progress. Toronto has been outscored 11-10 in five-on-five play.

"We want to find ways to break the opponent down, get off the wall a little bit more, find ways to create a little more motion and getting into the interior side of the ice and winning some of those battles in those key areas to get quality looks," Tavares said. "Overall, so far, we've built a good foundation in the way we want to play and how we want to be connected and structured throughout all three zones and the things we're doing away from the puck."

Tavares pointed out that these early-season games have been a bit tighter than normal, because of the nature of divisional play.

"Teams are just extremely well prepared for the opponent as you only have to pay attention to six other teams," Tavares said, "and knowing how crucial each and every game is in a shortened season."

Tavares and Nylander will have a new linemate tonight. Ilya Mikheyev is getting a promotion to the top six despite posting just one assist in seven games.

"Mikheyev has played very well when he's played with JT," noted coach Sheldon Keefe. "Micky's been really good here for the last few games. It hasn't resulted in goals and points or anything like that quite yet, but he's been getting his opportunities so it's just a matter of time."

One of the first moves Keefe made after taking over as Leafs coach in November 2019 was moving Mikheyev to the Tavares line.

"We had some good chemistry last year," Tavares said. "It's been a while since then, but we know Micky's speed and his dynamic ability and the pressure he can put on the opponent with his speed."

Mikheyev expressed his love of soup early last season, which helped make him a social media star among the fan base and also earned him a sponsorship deal with Campbell's this year. He's picking a soup for every game day and today it's Italian Wedding. That's fitting, because a marriage with Tavares and Nylander may prove delicious for the Leafs.

I’m the #ChiefSoupOfficer of @campbellcanada and I’m picking Italian Wedding soup for our next game. It’s delicious. #sponsored 🥣 = 🙏 pic.twitter.com/qwlP0ccvCO

Mikheyev was playing with Tavares and Nylander before sustaining a wrist laceration on Dec. 27, 2019 in New Jersey, which forced him to miss the rest of the regular season. Mikheyev scored in four of six games before the injury, but failed to hit the scoresheet in the summer qualifying-round series against the Columbus Blue Jackets.

"He hasn't been rewarded this season yet, but the chances he's created from the pressure that he's able to put on the opponent is hard to find," Tavares gushed, "and something that we can definitely use."

Mikheyev struck iron on a partial breakaway on Sunday against the Flames in Calgary. His hands may not be clicking yet, but his legs are certainly working well.  His quickness is a huge asset, especially on the penalty kill.

"His speed is elite," noted defenceman Jake Muzzin. "He's able to skate pucks out of trouble. He's able to force them. He gets his gaps up and he's learning certain reads and getting better every day."

Was Mikheyev always this fast? pic.twitter.com/KNic4IOv2j

Jack Campbell will miss "weeks" with a leg injury, according to Keefe. That means Michael Hutchinson, who struggled as Toronto's No. 2 goalie last season, is the backup again.

"I do think the way the schedule sets up here now, it’s pretty favourable for us and for Fred Andersen's workload," Keefe noted. "Coming off this trip we're going to have a little break and then we don't have any back-to-backs or anything like that for a while."

The Leafs wrap up the road swing with games in Edmonton on Thursday and Saturday. After that, Toronto will have four full days off before their next game. They will play on consecutive nights only once between now and March.

Keefe made it clear the Leafs also have faith in Hutchinson, who played for the Colorado Avalanche during the summer.

"There's only one player on our roster that was winning games in the second round of the playoffs last year so he's coming in here with a different level of confidence than what he had the last time around," Keefe noted. "He went off to Colorado and was put in a really tough position in the playoffs and gave them an opportunity to compete and get to Game 7."

Muzzin averaged 1.9 shots per game last season, but is up to 2.5 per outing so far this season.

"The mindset's always been there whether or not I've executed maybe has changed a little bit," said Muzzin, who scored his first of the season on Sunday. "I'm going to continue trying to get pucks to the net when it's the right time and luckily one bounced in last game. The more pucks you throw, the better chance you have at getting one or helping the team get one."

Muzzin and Morgan Rielly are tied for fourth on the Leafs with 18 shots on net.

"You have to take pride in not having them get blocked," said Rielly. "You want to be a part of the offence and help out when you can. I mean, those guys [Leafs forwards] are always matching up against good players on the other side so if it's possible for us to chip in at all we want to be able to do that and make sure when we get the puck up top we do something good with it."

First of the season for Jake Muzzin... check. pic.twitter.com/8xWH3jm7Nu

This is the third time Toronto has played a two-game series against an opponent, but the first time they've won the first game.

"It is difficult to beat a team twice," Keefe admitted. "We've been on the other side of this both in Ottawa and against Edmonton. We lost the first game and had to push back and find a way to win the second and we were successful in that. These two or three game sets are really important. If you are going to try and separate yourself from the pack then you need to be able to win them and be able to win back to back games and it's not easy ... We want to make sure we come out today knowing that Calgary's going to have a great response."

After gutting out what several players described as an "ugly" win on Sunday, the Leafs are looking to tighten up a bit.

"It starts in the neutral zone with not allowing them easy entries," said Muzzin. "They're good in the O zone. They create a lot. Their D are very active. It starts with making it tougher for them to get into our zone and then we need to talk more in our zone and close plays quickly. It's an area we've looked at and will need to continue getting better at and being quicker to support the plays down low."

Travis Boyd and Joey Anderson will make their Leaf debuts tonight on the fourth line.

Mikko Lehtonen will play his third career NHL game, but this is the first time he'll start on a regular pairing with Zach Bogosian. In Lehtonen's two previous outings, the Leafs dressed seven defencemen.