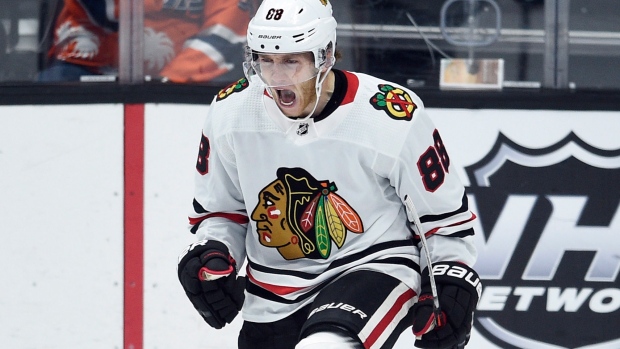 TSN Toronto reporter Mark Masters checks in daily with news and notes on the Maple Leafs, who held a skills practice at Ford Performance Centre on Friday ahead of Saturday night’s game against the Chicago Blackhawks.

John Tavares had 134 points for the Oshawa Generals during the 2006-07 season, his highest total in the OHL, but it was still 11 points behind Patrick Kane, who won the scoring title. Chasing down the elusive winger hasn’t gotten any easier in subsequent years.

"It was the first time I had really seen him and it's just the same type of thing now, 'How does this guy do this?' He just finds a way to create so much ice and be as slippery as he is," Tavares said. "Obviously, you see the skill when he gets the puck on his stick, but his ability to get it in good areas of the ice just tells you about his intelligence of the game. He probably had the puck 60 to 70 per cent of the game in junior, I mean, just that dominant."

The London Knights raised No. 88 to the rafters of Budweiser Gardens on Friday night. Kane played just one season for the team, but it was an incredible tour de force: 62 goals and 83 assists.

On Friday, Patrick Kane's #88 becomes the 9th number retired by the London Knights prior to our game against @Sudbury_Wolves 🏒 pic.twitter.com/8GYTRp3iUv

Mitch Marner, who won a Memorial Cup with the Knights in 2016, says Kane left a "massive" legacy in London. Despite hearing regularly about Kane's exploits during his junior days, nothing prepared Marner for what it was like to face the Blackhawks dynamo in the NHL.

"Seeing him on TV, you don’t see how fast he does it," Marner marvelled. "I'd say that’s the difference, just how much faster it seems in real life when he has it with hands, with his playmaking ability, with his vision, it just comes a lot faster and just comes so natural to him and just really impressive."

How do you stop him?

"That's a good question," Tavares said with a chuckle.

The Leafs certainly didn't have an answer on Nov. 10 at the United Center when Kane potted a pair of goals and added an assist in a 5-4 Chicago win.

"Kaner's always a tricky one," said defenceman Tyson Barrie. "He's so good coming through the neutral zone and creating space for other guys. He's a world-class player."

Kane arrives in Toronto just two points shy of a major milestone: 1,000 points. Kane had plenty of friends and family in London tonight and no doubt many will also make the two-hour trip down the road to Scotiabank Arena for Saturday's game. It's a quasi homecoming for Kane, who hails from nearby Buffalo.

"He seems to get better and better every year," observed Auston Matthews, who is hoping to play internationally with Kane on Team USA one day soon. "It's pretty impressive what he can accomplish. Every single year, year in year out, he's at the top of the leaderboard for points."

Kane posted a career-high 110 points last season (third overall) and with 60 points in 48 games this year is once again on pace to break the century mark.

"He doesn't really have off nights," said long-time teammate Jonathan Toews. "And on his off nights he still finds ways to create offence and get on the board and I think over the years that definitely adds up. Pretty cool he's made it this far and I'm sure if you ask him he's not planning on stopping any time soon."

Kane didn't speak to reporters in Toronto after Friday's practice, because he had to catch a flight to London for the festivities. But the 31-year-old is becoming more vocal inside Chicago's dressing room as the franchise goes through a transitional phase.

"Kaner's really realized more and more how much of a leader he is in the locker room," noted Toews, "especially with some of these young guys who have watched him and tried to model their game after him for so many years. I think he's come into his own as a leader in the locker room."

William Nylander grew up admiring Kane and now wears No. 88 for the Leafs. Has he asked brother Alexander Nylander what it's like to play with Kane?

"Yeah, of course," Alexander, in his first year with the Blackhawks, said with a smile. "I tell him how it is. Obviously, we were watching him growing up and he was one of the best players in the league if not the best. It's awesome playing on a wing with him so I've been telling him how amazing it is. Getting the opportunity there is unreal."

The elder Nylander brother is heating up of late with 10 goals in the last 13 games. On Thursday night the Leafs winger struck for his 21st goal of the season, a tap-in on the power play from the edge of the crease. It was his 17th tally from the inner-slot area which, according to analyst Mike Kelly, is tied for the league lead with Carolina's Sebastian Aho.

"This year he's really gotten to that area," Marner said. "He's been a menace around the net, I guess you could say, and he's not missing his opportunities when he gets around there, which is huge for him and our team."

Tavares, Nylander's linemate, sees this as a natural evolution for the 23-year-old.

"It's just continuing the growth of his game," Tavares said. "That’s where the goals are scored is in the interior of the ice and around the net. The puck has to go there. I know for myself that was a learning process for a long time so it’s just continuing to figure that out and then consistently do that. And it's not easy, that's obviously the highest priority for teams to defend so then it's about finding ways to break the opponent down and create time and space or getting yourself open and having good timing, being in the right areas, getting your stick available and then finishing."

William Nylander puts the Leafs on the board with his 21st pic.twitter.com/f3uMrJpwiS

That's exactly what happened against the Flames as Tavares fed Nylander and the slick Swede knocked it just past red-hot goalie David Rittich. Nylander, who usually plays on the flank or bumper on the man advantage, is now getting a look in front of the net on Toronto's stacked top unit.

"He's not your typical big, net-front guy," Barrie noted. "But he's an intelligent guy. He knows when he's got to get the screen on the goalie and he’s got, obviously, incredible stick skills so he can tip pucks. The goal last night, you can see he knows when it's time to slide off to the backdoor."

"He's got really good hands," said Matthews, "he's smart. With him there on the power play, it's good. He's an option for Mitch to pass to and he has really good hands, really good edges down low so he can get into open areas, be elusive and create plays."

Jason Spezza played the 1,100th game in his NHL career on Tuesday and that morning he was one of the few Leaf regulars to hit the ice for an optional skate.

"I just like to get out and get moving and I have things I like to do on game days," Spezza explained. "A lot of it is just habit. This year I’ve skated less than other years because they’ve convinced me it's better energy-wise."

The person doing the convincing is Rich Rotenberg, Toronto's director of high performance. Spezza says they've cut down on his ice time when there's a lot of travel in the schedule. But it's a balancing act.

"Just try to manage him​," said head coach Sheldon Keefe. "We like guys who are hungry and want to be out there and it’s really good for our younger people to see that. He's not just out there messing around, he’s out there with very purposeful drills and working to get better and at his age and with what he's accomplished in the league, it sets a really good example for our team."

Spezza was one of the last players on the ice during Friday's skills practice, which featured most of the team.

"It was only optional for a very select group of guys," said Keefe. "Most of our guys, we wanted to have out there."

TSN's Kristen Shilton has more on how the Leafs will use the upcoming bye week and all-star break to re-energize here.

Andreas Johnsson had a couple close calls on Thursday night. He set up Matthews with a nice feed on a two-on-one rush, but Rittich denied the Leafs sniper with his blocker.

"When I see Matty get the shot I think he's going to score for sure, but I saw the replay and amazing save by the goalie," Johnsson said after the game.

In the second period, Johnsson was in perfect position to put home a rebound off a Kasperi Kapanen shot, but again Rittich was equal to the task. As he was skating away, Johnsson turned back and said something to the Flames goalie. What was it?

"It stays between me and him," Johnsson said with a smile.

Keefe wasn't smiling when asked about Johnsson's energetic night. The coach doesn't believe the left winger is back to top form after missing time with a broken ankle.

"It was very apparent that he's behind in terms of his conditioning," Keefe noted. "His shifts are real short, he gathers his energy and goes out and has bursts, but then he’s pretty gassed after that. I saw him a number of times coming back to the bench tired so that’s something he’s going to have to work his way through and we’ll help him do that."

Johnsson has failed to hit the scoresheet in three games since returning from the 38-day layoff.