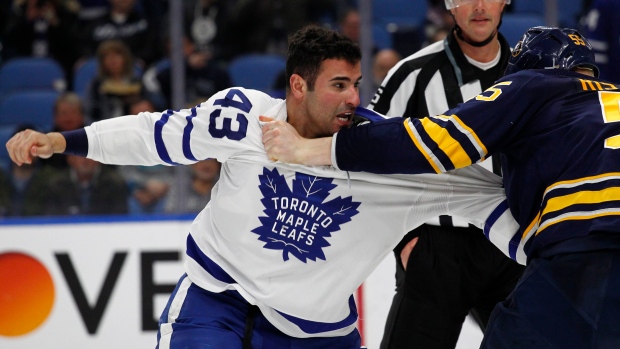 BUFFALO – The Maple Leafs ended their week-long road trip with a thud on Monday, falling 5-3 to the Buffalo Sabres to stretch their losing streak to four games. It’s the longest span Toronto has been winless since Jan. 8-18, and they return home with two of a possible eight points. The defeat dropped Toronto to 39-22-7 on the season.

The Leafs said all the right things following Saturday’s disappointing 5-2 loss to the Washington Capitals. In preparing for the Sabres, Toronto emphasized the importance of a good start, of playing the “right” way and of forwards helping out defencemen. But before the five-minute mark of the first period against Buffalo, Toronto was already trailing 2-0, first allowing a power play goal to Sam Reinhart and then a deflection goal to Jason Pominville. It was a sign of things to come for the Leafs, who would see two more bounces go against them on Buffalo’s next two scores.

Before that though, the Leafs pushed back and controlled play through the rest of the first, and Leo Komarov scored twice (once on the power play, once at even strength) to tie the game at 2-2 by early in the second period. But the Sabres kept on top of the Leafs with a good cycle game and plenty of bodies in front of the net. Zemgus Girgensons took back the lead for Buffalo in the third with a deflection off Morgan Rielly while battling a body in front. Then it was Rielly’s defence partner Ron Hainsey’s turn to give the Sabres a hand – he attempted to ring a clearing pass off the end boards that hit a linesman and deflected right to Ryan O’Reilly in the slot, who one-timed it past Frederik Andersen. That pairing had the worst night among Toronto's blueliners, finishing at minus-4 (Hainsey) and minus-3 (Rielly).

Frustration was clear for Toronto at times, not moreso than when Nazem Kadri dropped the gloves with Rasmus Ristolainen in the second frame after he felt Ristolainen took a liberty behind the Leafs' net, and then continued jawing at him from the penalty box. The only time Toronto was able to put real pressure on the Sabres was by using its speed, which Buffalo had no answer for. But the rush game isn’t generally Toronto’s forte, so the Sabres hemming them in their zone and throwing bodies and pucks towards the net ended up a recipe for success. By the second frame, the Leafs were doing a better job of matching the Sabres’ game down low and establishing their own cycle, but Toronto didn’t capitalize on its chances the same way Buffalo did and eventually went back to the rush game down by two in the third. In the end, the Leafs won the possession battle at nearly 59 per cent, but it was the bounces – or lack thereof – that determined the final score.

Cause for concern in the crease?

Frederik Andersen has set a high bar since Nov. 1 when he began establishing himself as one of the NHL’s top goaltenders. He has carried the Leafs all season long, and masked all manner of ills while starting more games (55) and facing more shots (1,505) than any goalie in the league heading into Monday’s contest. After allowing five goals on 25 shots to Washington, Andersen was pulled for the first time all season, and was anxious for a bounce-back performance against the Sabres.

That’s not what transpired though, with Andersen giving up five goals in back-to-back games for the first time all season. Granted, Toronto’s defence has been disorganized and average over the last week, but Andersen has also been fighting the puck more and struggling with rebound control more than he was been in the prime of his season.  Still, at least three of Buffalo’s goals came off deflections and redirections in what Andersen deemed a “weird” game. He did have an unobstructed look at O’Reilly in the slot on his score, and it was a stop Andersen would normally have; in a game that wasn’t tilting in Toronto’s favour, it’s one he likely would have wanted back at that.

But the most confusing goal of the game came on Buffalo’s fifth, when Johan Larsson appeared to trip up Andersen as he battled towards a rebound in his crease before putting a puck behind him. Mike Babcock challenged the call, but the call on the ice was confirmed and ultimately sealed the Leafs’ fate. After the game, the Leafs' head coach took issue with the NHL’s explanation of the call and was adamant that “No one knows what’s going on so we better get it solved...let’s get it fixed. Let’s get it fixed before the playoffs so we all know the rules.” Andersen agreed, saying he was more unclear than ever about what qualified as interference. He finished the game with 19 saves on 24 shots, for a season-low .792 save percentage.

For the first time since Jan. 22, Matt Martin slotted back into the Leafs’ lineup after spending the last 18 games as a healthy scratch. It was an admittedly frustrating stretch for Martin, and he spoke before the game of his determination to make the most of this chance and regain a permanent position in Toronto’s lineup. With Martin back in, the fourth line was as impactful as it has been in weeks. Skating alongside Tomas Plekanec and Leo Komarov, Martin had intensity from his first shift, although it took until the second period before he was playing the puck with noticeable confidence and had some jump to his skating. Mike Babcock had implored upon him to be physical and get to the net as much as possible, advice Martin heeded each time he was on the ice.

While he’s never been a speed player, Martin was creating chances in front of the crease, and in the second frame coordinated a perfect passing play off the rush to set up Komarov’s second goal of the game. That score marked the first time Komarov had two goals in a game since Feb. 21, 2017. Down by two goals, Babcock sent the fourth line out to start the third period after they proved through 40 minutes to be the Leafs’ most consistent trio up front. Martin generally averages 7:55 time on ice per game but was up at 9:50 on Monday, and Babcock called the fourth line Toronto’s best throughout the game. Plekanec looked as good as he has since arriving in Toronto as well, finding easy chemistry with Martin and Komarov that showed at both ends of the ice. The trio’s possession numbers were lowest among Leafs’ forwards at 51 per cent, but overall they played a consistent, solid game.

The Leafs' penalty kill has been the stronger of their special teams units all season, but their last two outings have been as poor as they have produced all season. Against Washington on Saturday, Toronto gave up two power play goals on two attempts, and less than two minutes into Monday’s game they allowed another on Buffalo’s first man advantage opportunity. Whether it’s a crisis of confidence or just a lull, the kill isn’t executing on any level as it sits at 3-for-7 over the Leafs' last three games. It doesn’t help that Andersen has been shakier (by his standard) over the last week than he was previously, when the goaltender was inarguably Toronto’s best penalty killer.

On Monday, the power play goal allowed set a tone for the Leafs by putting them back on their heels early and forcing them to chase the game from there on out. Babcock stressed the importance of the details of Toronto’s game before Monday night, specifically in the context of the penalty kill, and the fact they didn’t perform to expectations yet again so quickly was deflating. The Leafs finished 1-for-2 on the penalty kill, and 2-for-2 on the power play after Mitch Marner added an extra-man goal late in the third period to cut Buffalo’s lead to the final 5-3 score.

The Leafs will have a four-day break from game action before facing the Pittsburgh Penguins at home on Saturday.