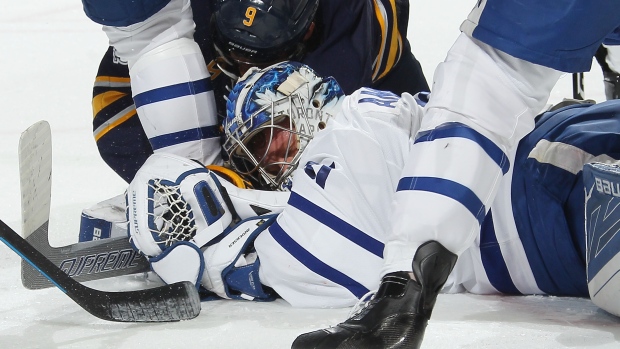 TORONTO — The Toronto Maple Leafs are expecting to have their No. 1 netminder back in the crease Thursday night in Nashville.

Frederik Andersen took part in an optional practice in Toronto on Wednesday afternoon and sounded optimistic about starting against the Predators, ending a few days worth of uncertainty about his status for the Leafs' playoff push.

"We'll see on the plane, but I'm looking pretty positive and I feel ready to go," Andersen said shortly before the two-hour flight to Nashville.

The 27-year-old was injured in the opening minutes of the Leafs Saturday visit to Buffalo after he was bumped in the head by Sabres forward William Carrier. Andersen claimed to feel "a little bit off" after the collision but remained in the game for the ensuing 17-plus minutes before he was finally replaced for the second period by backup Curtis McElhinney.

He was declared day-to-day with a mysterious upper-body ailment, the details of which the Leafs never revealed.

McElhinney started in relief against Florida on Tuesday and, while wobbly and perhaps fortunate at times, made 25 saves to secure a 3-2 win over the Panthers. The victory kept the Leafs one point up on the Boston Bruins for third in the Atlantic division and four ahead of the rising Tampa Bay Lightning with seven games to go.

Andersen's return is a big boost to the Leafs' push, his relative stability between the pipes helping the club jump from 30th place last season into the playoff fold this year.

The Danish netminder boasts a very respectable .918 save percentage in a career-high 61 starts. He's been especially effective in March, posting a 6-1-2 record with a .936 save percentage.

Andersen looked upbeat as he tooks shots from teammates on Wednesday afternoon, and even an attempt that rung off his mask failed to dull his spirits.

"We worked hard on the ice and made sure that I got up to speed again," Andersen said.

Leafs coach Mike Babcock planned to discuss Andersen and the goaltending plans for Thursday with goalie coach Steve Briere on the ride to Nashville, but seemed confident his No. 1 would in fact return. Toronto all but confirmed it by sending third-stringer Garret Sparks to the Toronto Marlies shortly after practice wrapped up.