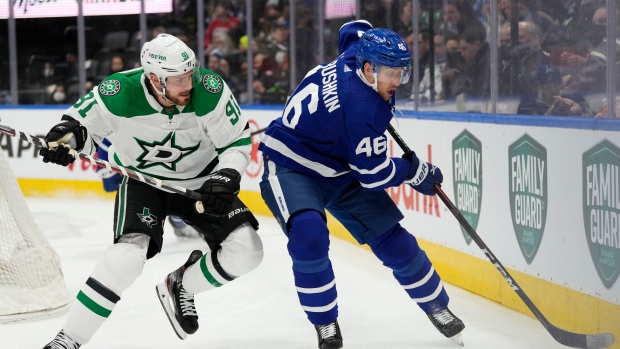 The Maple Leafs (optional) and Carolina Hurricanes skated at Scotiabank Arena on Thursday.

"He's a big guy that plays hard," Rielly observed. "He prioritizes defence. When he’s in the d-zone being physical, he's a good presence."

It's a presence the Leafs have lacked at times in recent years. But it's unclear whether the 6-foot-2, 208-pound Lyubushkin can do enough offensively to ensure Rielly's shifts continue to produce the same chances as usual. Lyubushkin has just one assist and five shots on net in 11 games since being acquired by the Leafs in a trade with the Arizona Coyotes.

"We've tried to work with him on that," said coach Sheldon Keefe. "On his play with the puck and different plays that are available. We do think there's a great opportunity for growth."

Lyubushkin has just one goal and 19 assists in 191 career National Hockey League games.

Lyubushkin earned the nickname "Russian Bear" from the media in Arizona, because of his physical play. And the 27-year-old has delivered as advertised since arriving in Toronto.

"He's a force out there," observed gritty winger Kyle Clifford. "He's definitely very difficult to play against. He's hard to move around the net. He doesn't give you much time and space around the net. I had the opportunity to play him a lot last year and when I saw the trade, I was really excited about it. I think it's a great fit for that D corps. He brings a really strong element there."

Lyubushkin has registered 33 hits since joining the Leafs on Feb. 22. T.J. Brodie is second among the team's defencemen in that time with 15.

"The most impressive thing is, No. 1, just his high compete level and that spirit that he has," Rielly said. "He wants to get in there and be physical. And then the skill and timing that it does take to make those big hits, I don't think it's a lost art but it's definitely hard."

"If we have a numerical advantage coming back to our end, he's going to hold the line," Keefe said. "He's going to be physical and put his body on the line and get in the way. Those are important things to have, and he's brought that to us and it's rubbing off on other guys too."

Lyubushkin often finds a way to kill plays when the puck comes into his area of the ice. Keefe points out that Lyubushkin often maintains good gap control and uses his stick effectively.

"He certainly is a competitor," the coach added. "He really does know who he is. When I come to him with positive feedback and things I liked about his game, his response is often, 'That's my job.'"

"We talk a lot between shifts," said Rielly. "He's asking lots of questions about positioning and how we play and structure. You can tell he wants to be really good and play well together ... He's had a big impact on our team since he's gotten here, and the feeling I've gotten from him is he's only going to get better."

With Auston Matthews out due to a suspension, John Tavares moved up to the top-line centre spot on Tuesday skating between Michael Bunting and Mitch Marner. Tavares delivered a goal and an assist against the Stars.

"He's a world-class player," said Keefe. "He's played in that position lots. He's a leader on our team and recognizes it's a big moment and a big opportunity."

The Leafs generated 1.9 expected goals with Tavares on the ice in five-on-five play, per NaturalStatTrick.com, making Tuesday his best game in that department this season.

"He takes his role on this team, both on and off the ice, very seriously," Rielly said. "He's able to really jump in anywhere and contribute at a very high level. He's been doing it now for a very long time. That's what we've come to expect out of him."

The Hurricanes aren't expecting the absence of Matthews to change the dynamic of tonight's game too much.

"They did pretty well the other night without him," noted coach Rod Brind'Amour. "When your top guys go out, you can get by for a little while ... That's why they have depth. All the good teams have depth. They got other guys too that really make this team tick."

Frederik Andersen will play in front of a full house in Toronto for the first time since signing with the Hurricanes in the summer. What sort of reception is the ex-Leaf expecting?

"I don't know," he said. "We'll see. I had a nice little tribute last time with the fans that were here and felt like they appreciated the time I was here for. We'll see what happens when the whole rink fills up."

Leafs thank Frederik Andersen for his five years in Toronto

Standing ovation from the small group of fans pic.twitter.com/PZ5hvITQtU

The Leafs and Hurricanes played in front of a few hundred fans back on Feb. 7 with Toronto winning 4-3 in overtime.

"I actually thought we had a really good game," Andersen recalled. "I wasn't too happy about my little mistake in the third that ended up costing us maybe one point."

Andersen knocked a puck that was going wide right to Marner in the slot for the tying goal.

"Good to see some old friends and get to try and get them back for last time," Andersen said.

After a three-year run on Brind'Amour's bench in Carolina, assistant coach Dean Chynoweth made the move to Toronto in the summer. As a result, Brind'Amour believes the two teams are looking more and more similar on the ice.

"Good on them to go get him and, you know, take the good stuff with him," Brind'Amour said with a wry grin. "I'm happy for Dean. That was a good move for him."

"We look at Carolina a lot, because of Dean's connection," confirmed Keefe. "Having Dean on our staff gives us great insight into how things run in Carolina, and they've obviously established a great culture there."

You can certainly understand why the Leafs want to emulate the Hurricanes, who lead the Eastern Conference in points percentage this season.

"In terms of puck pressure and structure and how Carolina plays, they're the class of the league in a lot of regards," Keefe said. "When we're at our best, we do that well. We haven't done it with the consistency we'd like in order to get into that class. We're not far away from that and tonight's an opportunity for us to get there."

The structure is one thing, but Brind'Amour, who won the 2021 Jack Adams Award, has also proven to be a master motivator.

"There's very, very little difference in what coaches are preaching and talking about daily to their players," Brind'Amour said. "Same message. You take me out, he's saying the same thing. It really comes down to, can you do it consistently? The teams at the top, they're generally the ones that do it more consistently than others."