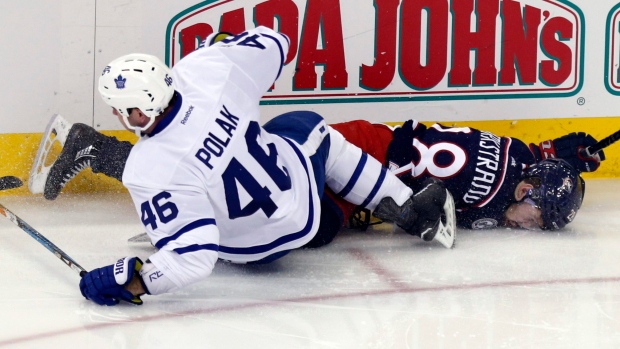 The NHL announced the move following Polak’s hearing with the Department of Player Safety on Thursday. This is the first suspension of Polak’s 11-year NHL career.

Polak was assessed a five-minute major and game misconduct for flattening Bjorkstrand into the boards in the third period of Wednesday’s 5-2 Toronto win. The physical blueliner appeared to have Bjorkstrand in his sights for a shoulder-to-shoulder hit, but the Blue Jackets winger turned at the last minute and Polak sent him face-first into the boards.

Bjorkstrand remained down on the ice for several minutes and didn’t return to the game.

In the initial confusion over whether Polak was going to the penalty box or leaving the game immediately, the Maple Leafs failed to put anyone in the box to replace him, turning a five-minute kill into one that lasted 6:54.

When the initial time expired, Blue Jackets goalie Joonas Korpisalo negated every icing and prevent Toronto from getting a fifth skater out. Leafs centre Brian Boyle finally filed a shot into Columbus’ bench to get a stoppage and return Toronto to full strength.

Polak will miss Toronto’s matchup Thursday night against New Jersey and Saturday’s game in Buffalo. Alexey Marchenko will suit up in Polak's stead. Marchenko last played in a March 18 overtime loss to the Chicago Blackhawks.

Bjorkstrand did not travel with the Blue Jackets for their Thursday night contest against the Washington Capitals.