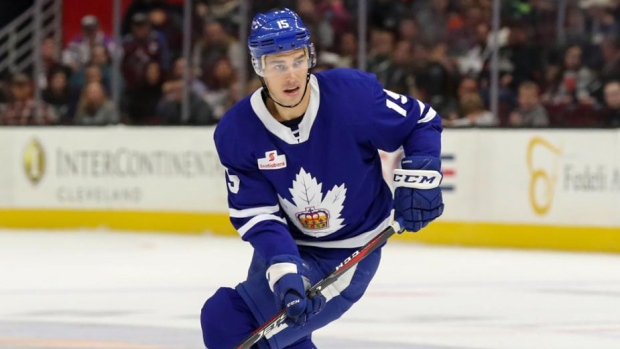 The Toronto Maple Leafs acquired defenceman Steven Oleksy on Monday in a trade with the Anaheim Ducks.

Forward Adam Cracknell was sent to Anaheim. Both players have played exclusively in the American Hockey League this season.

The 32-year-old Oleksy collected two assists in 15 games with the San Diego Gulls this year. He signed with Anaheim as a free agent on July 1, 2017.

Cracknell was selected by Calgary in the ninth round (279th overall) of the 2004 NHL draft. He has three goals in 14 games with the Marlies this season.

The 33-year-old has 21 goals and 22 assists in 208 career NHL games with St. Louis, Columbus, Vancouver, Edmonton, Dallas and the New York Rangers and has one goal in 10 career Stanley Cup playoff games with the Blues.

Also on Monday, the Toronto Marlies traded goaltender Jeff Glass to the San Diego Gulls for future considerations in a deal between the Leafs and Ducks affiliates.

Glass posted a 3-4-1 record in 10 games with the Marlies this season while notching a .849 save percentage and a 4.31 goals-against average.