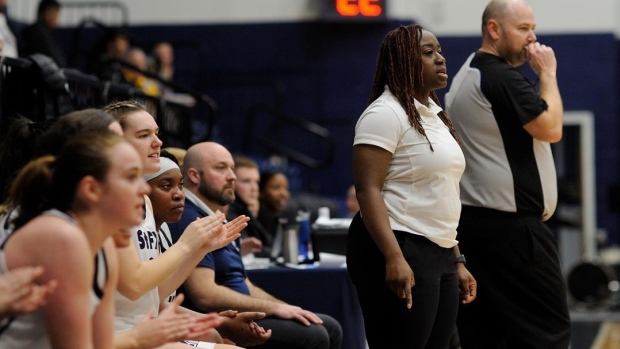 Lee Anna Osei's brother Samuel would have turned 32 on May 26 — the day after George Floyd was killed by a Minneapolis police officer, sparking an American uprising.

It was an emotional time for the St. Francis Xavier University women's head basketball coach, but a pivotal one.

In the days that followed, the 30-year-old from Toronto, who's one of the youngest and one of the few Black coaches in Canadian university sports, started the Black Canadian Coaches Association (BCCA), an initiative the coaching community said was a long time coming.

"I may not be able to solve everything that is wrong with our system, but the least I can do to honour my brother is use sport as my tool for positive change in our community," Osei said.

Samuel was two years older than Lee Anna. He wasn't athletic, but was "extremely smart," identified early on as gifted in math and science.

He was the first in the family to earn a university degree, from Wilfrid Laurier in Waterloo, Ont., but soon after entering the corporate world as a chartered accountant his mental health began to deteriorate. He was working 18 to 20-hour days, and was constantly fearful he would lose his job.

"Racial discrimination in the workplace was something that he spoke to me about often, in his experience and how he was treated, and the lack of supports available," she said.

Samuel was eventually diagnosed with both depression and bipolar disorder. He killed himself in August 2012.

When Osei returned home from playing just one season at the University of Miami, it was her brother who pushed her to finish her undergrad basketball career and studies.

"I mean that literally," she said. "He forced me to drive up to Waterloo after working a graveyard shift, along with my mother to meet with his mentor and Laurier professor Dr. Laura Allan. I was already late for academic entrance submissions but (Allan) helped me through the application process."

The five-foot-three guard hadn't yet committed to playing for Wilfrid Laurier. But when her brother died, the entire team drove to Toronto to attend his funeral. Osei and her mom had to crowd source to cover the costs of Samuel's funeral, and his small name plate at Beechwood Cemetery.

Laurier has since set up the Samuel Osei Memorial Fund in his name.

"Sport has always been a unifying tool, and that was one of those moments that I will always hold dear," Osei said.

Osei — whose mom, her "super hero," arrived in Canada from Ghana alone and pregnant at age 18 — grew up in north Toronto's hardscrabble Jane and Finch neighbourhood. The family moved to a better home in nearby Vaughan but spent the first year sleeping on a carpeted floor until they could afford furniture.

When Samuel died, Osei and her mom were briefly homeless. Her mom, who'd paid for much of Samuel's education on credit cards, had to declare bankruptcy.

Osei decided to go to Laurier, "which was one of the best decisions I have ever made," and capped her college playing career with four excellent seasons with the Golden Hawks.

She's coached for 12 years, including several seasons with Ontario's provincial teams. She won the 2018 Prep School Coach of the Year after leading TRC Academy in Brantford, Ont., to an 18-3 record in the Ontario Scholastic Basketball Association.

Canadian coaches have long lamented the lack of a Black coaching association, and in the days after Floyd's death, Osei decided to do something about it. she started the BCCA, with three objectives of celebration, advocacy through allyship, and networking.

The coaching community isn't surprised that she's blazing a trail.

"She's been a leader since she was very young," said Sacramento Kings assistant coach Roy Rana, who coached Toronto's storied Eastern Commerce program while Osei played and then coached there. "She's a natural leader, not surprising that she would be at the forefront of something like this."

CBC Sports recently did a visual audit of 400 key positions — athletic director, and head coach of football, men's and women's basketball, hockey, soccer and track — in all 56 Canadian universities that compete in U Sports. Only 10 per cent of the positions are held by Black, Indigenous or people of colour.

UBC's Kavie Toor is the only non-white athletic director.

"For a long time, in (U Sports), people have felt that they've been discriminated against, or there have been issues that haven't been addressed," said Charles Kissi, head coach of the CEBL's Guelph Nighthawks, Raptors 905 assistant, and former Brock University men's coach.

"And I know that on a personal level, and I know that from other coaches around the league. I think what Lee Anna is doing is fantastic."

The BCCA wants to ensure support for people of colour within every post-secondary institution's athletic department. Osei has spearheaded a task force with the support of McGill men's coach Ryan Thorne and Concordia women's coach Tanicha Gittens.

They're speaking to executive directors from each of the four U Sports and six Canadian college conferences across the country.

Their call to action includes the appointment of a black equity committee for each of the 10 conferences, comprised of staff members and student-athletes to offer support and services to racialized minorities.

"I'm two years in (as head coach of the X-Women in Antigonish, N.S.) and people still think my white assistant coach is the head coach," Osei scoffed, about the microaggressions faced by coaches of colour.

The BCCA is calling for anti-oppressive and anti-racist professional development training, specific to working with Black, Indigenous and people of colour in sport, for all Canadian athletic post-secondary institution members and stakeholders.

"We do CCES (anti-doping) training, we do safe sport training," she said. "But we don't have any cultural pedagogy that speaks to anti-Black and anti-Indigenous racism. So that's really problematic."

The BCCA also wants racially-diverse hiring committees struck for the appointment of positions within athletic institutions, and Black, Indigenous and people of colour candidates must be interviewed and hired.

"I'm all for (the BCCA)," said McMaster men's coach Patrick Tatham. "Over the last four or five years maybe, I've talked about it with other colleagues, whether it be Roy Rana or (Charlotte Hornets assistant) Nathaniel Mitchell, and everybody's always been 'We need some sort of Black Canadian coaches association of some sort.'"

Even keeping statistics like the NCAA does, Tatham said, would be a big start. The NCAA has both an annual Student-Athlete Race and Ethnicity Report and the Race and Gender Demographics Reports.

The BCCA hopes to help establish awards to help eradicate the barriers of financial need.

Osei believes some of the issues are easy fixes. There are precedents for mass fundraising, for example. Athletic programs have "Shoot for the Cure" fundraisers for the Canadian Cancer Society.

Osei said the BCCA will formalize its structure over the next few months.

Note to readers: This is a corrected story. A previous version erroneously reported that Lee Anna Osei's brother would have turned 31 this year.