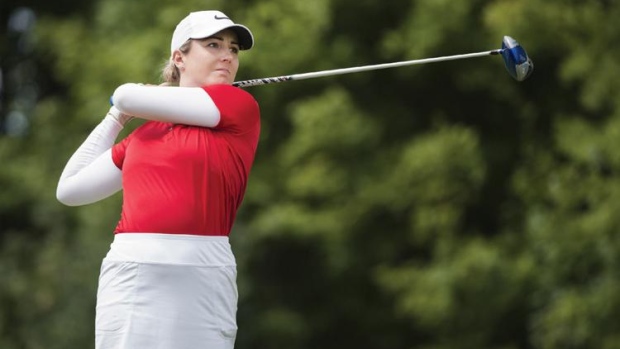 Megan Osland has heard all the jokes before.

She’s been called backhanded and southpaw. She’s been told to turn around and hit the ball from the proper side. She’s even had players walk across her line on the putting green, assuming she’s rolling her ball in the opposite direction.

It’s something every left-handed golfer has faced while playing the game. The difference for Osland is that she is female and this week happens to be playing in the U.S. Women’s Open at the Olympic Club in San Francisco, Calif.

“It definitely sets me apart, that’s for sure,” said the 27-year-old from Kelowna, B.C., who is playing in her second U.S. Open.

Osland made it through a grinding 36-hole qualifier in Ormond Beach, Fla., last month, posting a total of two-under to earn one of the two spots in the field.

Remarkably, the other golfer to nab a spot in that qualifier was Kim Metraux of Switzerland. It’s remarkable because she is also left-handed. No one can remember if there’s been a U.S. Women’s Open with more than one left-hander and two may very well be a record.

While there’s no shortage of left-handed male golfers in the world, the number of females who stand on the right side of the ball is extremely limited.

Overall, left-handed golfers are in the minority. According to equipment sales, about eight per cent of American golfers are lefties. But in Canada, that number soars to more than 30 per cent.

Canadian manufacturers continually hound their American bosses to build and ship more left-handed gear north to meet the demand. Sit on the first tee at any club in this country on a Saturday morning and no one bats an eye if four port-siders play together.

It’s no surprise then, that Canada’s greatest male golfer, Mike Weir, is a lefty. He’s one of four left-handed players to have won major championships, along with Bob Charles, Phil Mickelson and Bubba Watson.

The PGA Tour roster currently includes a smattering of lefties such as Brian Harman, Ted Potter Jr., Greg Chalmers, Cody Gribble and Robert McIntyre, who splits his time between the United States and Europe. There have been 13 different left-handed players to win on the PGA Tour.

Left-handed women golfers, however, are rare. And left-handed elite-level players are even scarcer. Only one lefty, Bonnie Bryant, has ever captured an LPGA Tour event. She won the Bill Branch LPGA Classic in 1974.

While a handful of left-handed players have competed briefly on the LPGA Tour over the past two decades, there hasn’t been a regular member in some time. The last may have been Angela Buzminski of Oshawa, Ont., who played parts of eight seasons starting in 2001.

“I was the only one out there at that time,” she said from Woodland Hills Country Club near Los Angeles where she works these days. “I wish I had a dollar for every lefty joke I heard back then. I would never have to work another day.”

In one of her first tournaments after qualifying for the tour, Buzminski went to the driving range to warm up and dropped a bag of golf balls down on the teeing area.  A veteran golfer next to her, looked up, somewhat surprised to see someone face on.

“Don’t shank one into me, lefty,” she remarked to Buzminski.

There doesn’t seem to be any good reason for the scarcity of female lefties. In Canada, the theory goes that many left-handers picked up golf after playing hockey, where a left-handed shot is more common. Since more men than women play hockey, that’s why there are more male lefthanders.

Osland falls into the group of women who played hockey and has wondered if that led her to swing from the left side.

“I was a hockey player growing up and I guess that’s where I get that from,” she shrugged.

When she started playing golf, Osland faced another problem: the difficulty in getting proper equipment. There weren’t a lot of left-handed women’s clubs in those days and she often played with ill-fitting gear. That’s no longer the case with the advancement of fitting and the ease of obtaining left-handed models of the most popular equipment.

There are signs things are changing and there may be more left-handed women playing in future U.S. Opens. The Symetra Tour, the developmental circuit for professional women’s golf, has a number of lefties, such as Katelyn Dambaugh, who have briefly held LPGA Tour status.

For now, Osland is looking at her difference as a positive.

“It’s kind of cool being one of the only lefties in the U.S. Open,” she said. “This is probably the best tournament in women’s golf, so I’m super excited to be here.”