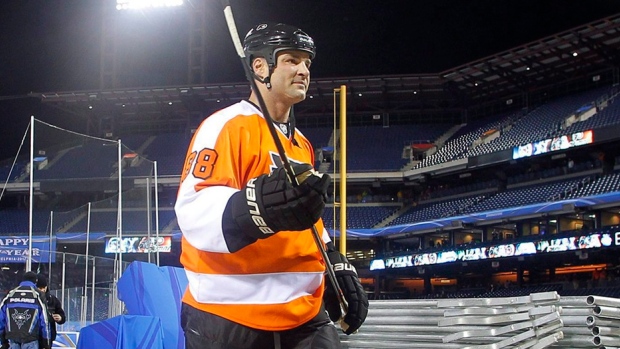 As first reported by TSN Senior Correspondent Rick Westhead, former NHL forward Eric Lindros has filed a $250,000 lawsuit in the Ontario Superior Court of Justice against former referee Paul Stewart, the Huffington Post and AOL, alleging that Stewart defamed him in an article he wrote back in July.

In his article, Stewart wrote that Lindros used foul language when greeted by Stewart and demanded that Stewart just drop the [bleeping] puck. Stewart also recounted that before the game he brought a tube of posters depicting Marc Recchi and Lindros to be signed by the players for a charity auction. However, when Lindros learned the posters were for Stewart, he tore them up.

In his lawsuit, Lindros contends that Stewart's article is "inaccurate, untrue, and defamatory" and that as a result, "reasonable and ordinary readers of the Article would regard Lindros with contempt or ridicule". In his Claim, Lindros also addressed the central issue in this lawsuit, namely, tearing up the posters:

"The statement that Lindros refused to sign posters intended for a charity auction, and more shockingly, tore them up because they were solicited by Stewart, is false and makes Lindros out to be unfriendly, hostile, rude, insulting, vindictive, cruel, uncharitable and generally a despicable person."

Defamation refers to a false published statement that is likely to lower the reputation of a person in the eyes of reasonable people. The law protects your reputation against defamation. If you are defamed, you can sue for monetary damages as well as an order prohibiting the distribution and posting of the comments.

What does Lindros have to prove?

Stewart's article was published on the Huffington Post website, the statements were clearly a reference to Lindros and Stewart's comments were negative. So Lindros should not have difficulty proving these three essential elements.

Does that mean Stewart automatically loses?

No. In a case of defamation, truth is a complete defence. So Stewart will argue that the comments were indeed true and that he did not manufacture the claims made in the article, particularly the key one, namely, that Lindros knowingly tore posters destined for a charitable auction. As per Stewart's article, he was told by the Flyers equipment manager Jim Evers that Lindros destroyed the posters. That means that Stewart may need to have Evers on board as a witness corroborating the story since Stewart never saw Lindros destroy the posters himself. The problem for Stewart, though, is that Evers has gone on the record saying the story is not true. If that's the case, Stewart may have some problems. Of course, Stewart could also try and find other witnesses who saw Lindros destroy the posters. The incident happened over 20 years ago and memories degrade over time. That may pose another challenge for Stewart.

Does it matter that Stewart's article was published online?

Yes, the mode and extent of a publication are important factors in assessing monetary damages for online defamation. Once you publish an article online, it immediately becomes available and accessible to so many more people as compared to an article that only appears in print. Indeed, Lindros alleges in his Claim that the article was disseminated and picked up by at least 47 other websites, and some of those websites led with unkind headlines about Lindros, which made things worse. The Ontario Court of Appeal acknowledged the unique nature of online publications due to its "interactive nature, its potential for being taken at face value, and its absolute and immediate ubiquity and accessibility".

Is Lindros being a public figure relevant?

Not in this case. In the U.S., a public figure must establish "actual malice" in order to successfully sue for defamation. Actual malice refers to showing that a defendant published comments despite knowing those comments were false or with reckless disregard as to their veracity. This higher standard of proof, however, is not imposed on public figures in Canada so Lindros doesn't have to worry about it. That might also be a reason Lindros elected to file his lawsuit in Ontario rather than in a U.S. court, where he could have also brought his lawsuit.

How much money could Lindros be awarded if he wins?

When it comes to monetary damages much turns on the evidence filed. That being said, generally defamation lawsuits like this one do not pay well and whatever damages are awarded can be offset by legal fees. It would not be unusual, for example, to see an award of $50,000 to $100,000 assuming Lindros was indeed successful.

Why are Huffington Post and AOL also being sued by Lindros?

In cases of defamation, it is not unusual to see the website that carried the story sued together with the owner of the website (if they are different). In this case, Huffington Post ran the story and AOL owns Huffington Post. For that reason, they were both sued. Their lawyers may be looking at the merit of the Claim and conducting their due diligence. If they conclude that Stewart did not tell the truth, they could print a retraction and an apology as part of a settlement with Lindros. Often times, that can satisfy a claimant and can also limit liability. However, that may still leave Stewart as the last defendant standing. As well, Stewart may have signed an agreement with Huffington Post whereby he agreed to indemnify or compensate Huffington Post and AOL for a monetary damage award and other monetary losses.

Defamation actions can be tricky. You often warn clients that an action may well bring more attention to the negative comments and by extension ultimately be counterproductive. Before suing, legal counsel and the client engage in a cost-benefit analysis to determine if moving forward is a good idea. In the case of Lindros, this may not be about the money as much as it is standing up for himself. In all likelihood, he must feel relatively comfortable with the merits of his claim to move forward with a lawsuit. For Stewart, he will need to show that the statements he made were true.