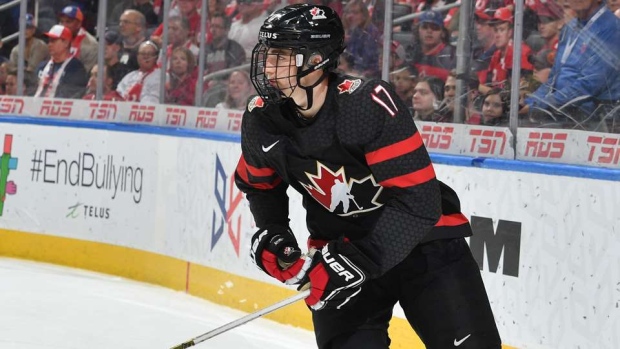 After a full season in the National Hockey League, Kirby Dach is embracing the opportunity to return to the junior level. With the World Junior selection camp set to start on Nov. 16 in Red Deer, Alta., the Chicago Blackhawks have loaned the centre to Hockey Canada.

"As a Canadian kid it's a dream come true to be able to play for Team Canada in this event," Dach said. "My mindset going in is I want to be a top player on the team."

Dach produced eight goals and 15 assists in 64 regular season games with the Blackhawks before adding one goal and five assists in nine playoff games inside the Edmonton bubble. Dach averaged 19 minutes and 24 seconds of ice time in the playoffs, which was second among Chicago forwards behind only Patrick Kane.

"He can bring leadership," said Team Canada head coach Andre Tourigny. "He had the chance to live a season with guys like Jonathan Toews and he's been in the bubble as well and that will be really helpful for the rest of the group."

The 2021 World Juniors will also be played in an Edmonton bubble with Canada opening its tournament on Boxing Day against Germany. Hockey Canada has agreed that Dach will be returned to the Blackhawks if the NHL season starts on Jan. 1.

“There are going to be a number of great players who aren’t going to make this team...”

"It would mean a lot," Dach said of a gold medal. "It's what you go to that tournament to do and I think we have the group to do it. With the guys returning, they know what to expect once you get into the tournament, and as a guy who's had a full year in the NHL I'll bring that experience."

That NHL experience included lots of time spent with Toews, Kane, Duncan Keith and Brent Seabrook, the core of Chicago's three most recent Stanley Cup wins. In a Zoom conversation with TSN, Dach revealed what he learned from each guy and the 19-year-old Alberta native also outlined the improvements he's been making to his game since the Blackhawks were eliminated.

How would you describe your leadership style?

"I'm not afraid to speak up when somebody needs to speak up and be a vocal leader, but at the same time I like to lead by my actions and lead by example. I had a season to learn from guys like Toews, Kane, Seabrook and Keith and I took a lot from those guys and tried to take their best qualities and jell it all together to become my own person."

What's the biggest thing you learned from Toews?

"He just seems to have that knack for saying things when they need to be said and how to say it and how to get through to everybody. He's very good at talking to everybody when they first come to the rink in the morning and making sure everybody's doing alright and finding the best way to get each guy going and I think that's something I took. He's very down to earth and likes to make sure everybody is on the same page and that we're all pulling the rope in the same direction."

Did you have a moment with him that stood out?

"I spent a lot of time with him on the road and we sat together on the plane a couple times and just being able to pick his brain was pretty special. I mean, he's somebody I looked up to as a kid and to hang out with him daily was awesome. Everything he said I kind of took in. The biggest thing he said was just to be myself, 'Stay true to who you are and everything will work out.'"

What about Kane? What stood out to you the most about him?

"Just his mindset. Kaner's so driven and focused. Every time he steps on the ice he wants to be the best player and as a young guy you can see that. He's one of the first guys on the ice at practice and he's usually the last guy to leave and I think that goes a long way and to learn from that at a young age is huge."

You lived with Seabrook and his family. What did you pick up from being around him?

"Seebs was a lot of fun to live with. That's another guy who knows his job and does it well. He's a great player and he's still got lots left to give to the Blackhawks organization. It was good to see the mindset away from the rink and be able to balance your home life and hockey and that was a big thing living with him. Being in a city I wasn't that familiar with and being off on my own and having to fend for myself, it was fun to live with him and his family and I can't thank them enough."

What did Seabrook teach you about the mental side of the game and compartmentalizing?

"As a young guy you try and step into the league and make a difference every night and it's the best league in the world and you're not going to be the best player on the ice every night, necessarily, at a young age. So, he was able to help me mentally leave the game at the rink and not really stress about it too much. He said it the best, 'In playoffs it's a seven-game series, you can't be focusing on one game if you lost it ... You got to reset your mind and come to the rink the next day and be prepared.'"

What was your takeaway from seeing Keith up close?

"He's different in a good way. I mean, he's 37-years-old and he's in phenomenal shape and wins our fitness testing all the time. So, that side of things was cool and interesting to see how well he takes care of his body away from the rink. His home gym, I went to it a couple times when we were in Chicago and that explains why he's the player he is. He puts so much time into the game and he's a hell of a player and it was a lot of fun playing with him this year."

"(Laugh) It's pretty special. I didn't really know what a lot of the things he had in there [were]. He's got a lot of tricks and I don't think he'd want me to give them away."

What did you learn from the NHL bubble experience?

"The bubble was fun. I enjoyed it. I didn't have a [young] family to worry about so as a younger guy it was cool to hang out with your teammates all the time and I think the biggest thing I noticed was how focused all the guys were. You're playing a game every second day or back-to-backs and to see top players from other teams and see how they get ready for games was pretty neat. When those games start coming up you don't have a lot of down time and it's pretty go, go, go so you got to find your rest when you can and make sure you're ready to perform on demand."

You didn’t play last year at the World Juniors, but you know a lot of these guys pretty well. Who are you excited to be on the ice with again?

"It will be exciting to see Dylan Cozens and Bowen Byram again. Us three were pretty close throughout the draft process and all that stuff and they are good buddies of mine. I skate and train with Matthew Robertson so it's exciting to get back with him. And Kaiden Guhle, who was just drafted, we've trained together the last three years so it will be fun."

What has been your focus in training since the season ended?

"Trying to get to a level where I can feel comfortable in my body and be strong on the puck and adding size in the right way. I started working with a trainer in Chicago by the name of Ian Mack and he's done a phenomenal job of helping me add size in the areas I needed to add it, but at the same time not taking away from my speed or hindering my abilities at all. So, I've been working closely with him and he's been a lot of fun to work with. Just trying to get my game to the next level."

During your season-ending availability, you said you wanted to find more confidence in your shot.

"I've always found myself to be a pass-first player and I'd go back and watch some games throughout the year and see opportunities to shoot or maybe put a puck on net that could create a chance for our team and instead I'll look for a pass and it won't get through. Playing with Patrick Kane, that's another thing that he's so good at is being so deceptive with whether he's going to pass or shoot. So, I was able to pick his brain on when he makes those decisions and how smart he is and when he makes those calls. So, for me to have role models like those four guys we mentioned, it's a great opportunity."

Does the topic of the World Juniors come up a lot around the Blackhawks?

"All the Canadians really hunker down and watch it during Christmas time. I still remember watching the gold-medal game this past year. Brent and I were sitting on the couch watching it and it was a thrilling finish. Those guys really care about it and it’s cool to see. As a Canadian kid growing up, it’s what you do on Christmas. You're excited for Boxing Day to come around to watch the World Juniors so to be a part of it will be special."