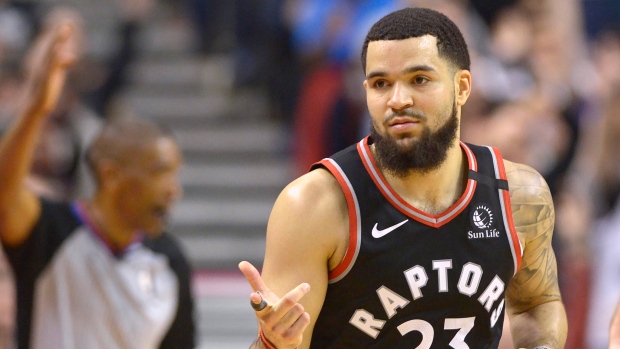 TORONTO – A little time and space has helped give Fred VanVleet some much-needed perspective on what he calls the worst stretch of his professional life.

It was last March. The Raptors had lost 13 of 14 games. VanVleet and several of the team’s other key players, as well as most of its coaching staff, were recovering from COVID. Their long and emotionally exhausting season in Tampa was nearing its disappointing end, and the writing was on the wall. It was time to cut their losses and look ahead to the future.

VanVleet understood, but that didn’t mean he was happy. For a player who has won everywhere he’s been since he first picked up a basketball, it was rock bottom.

“Outside of real stuff in the real world, that was probably the lowest point I’ve ever had, mentally, physically,” the 27-year-old guard said in a recent interview with TSN. “Missing the playoffs, having to sit at home and watch other teams play, contemplating playing or not playing at the end [of the season] and celebrating getting a draft pick. We love [fourth-overall pick] Scottie [Barnes] to death, but five months ago I was like, why are we celebrating trying to get a top pick? That’s not what we’re about.

“So, all of those things were just a big reminder of how much we should appreciate what we have on a daily basis, and to never go through that again. That’s what I told myself. I never want to do that again.”

VanVleet and the Raptors are getting set to open a new season. They’re back in Toronto, where they’ll host the Washington Wizards to kick things off on Wednesday, exactly 600 days since their last meaningful game of basketball in front of a full capacity crowd at Scotiabank Arena.

Finally, they’ll have a chance to turn the page and put their ill-fated 2020-21 campaign behind them. The best way to do that is to get back to where they were before it happened.

This team isn’t competing for a championship, not yet anyway, but they can hope to emulate the group of pesky overachievers that defended their title so admirably before the pandemic hit and the 2019-20 campaign was put on hold.

The notable difference between that team and this team is about 20 or so years of NBA experience. That was a team made up of veterans, basketball savants and champions. That team had Kyle Lowry and Serge Ibaka and Marc Gasol.

This is a team made up of kids. Barnes was four years old when Lowry broke into the league. Toronto-native Dalano Banton grew up watching Andrea Bargnani’s Raptors, not Chris Bosh or Vince Carter – he was born three months before Carter’s iconic 2000 NBA Slam Dunk Contest performance.

The average age of the 17 players on the Raptors’ opening night roster is 24.5, making them the seventh-youngest team in the NBA. If you subtract 35-year-old Goran Dragic, and at some point this season they might, they would be the fourth youngest. Eight seasons of NBA experience separate Dragic, a 13-year vet, from the team’s next most senior players, VanVleet and Pascal Siakam.

If the hope is to flush what happened last season, this is the group to do it with. They’re a blank canvas, a ball of clay ready to be moulded. What shape will they take? Much of that will fall on the people tasked with doing the moulding: Nick Nurse and his coaching staff, as well as the club’s young leaders.

With more experience on the roster in previous years, Nurse would often opt for rest over practice time. Full team practices were few and far between as the season progressed. The young guys would get their reps in with the assistant coaches in the morning. The vets would come in for a short film session, maintenance and maybe some individual on-court work.

But with a much younger and greener group, and without Lowry’s influence over the team’s practice schedule, Nurse is planning to spend a lot more time in the gym this year.

“Without Kyle messing everything up Nick can actually get stuff done,” VanVleet joked.

“I think for this group it’s important to take a step back and let Nick kind of do his thing with these guys and teach them. Sometimes I’ve got my head down and my eyes closed and I'm trying to get through it because obviously I've done it and some of the things are a little mundane and boring. But we got a group that really needs that stuff, so practices have been a little different than Nick is used to, but I think it will be good for the group.”

VanVleet isn’t the only one who gained some perspective over the past 20 months. He’s also noticed a difference in Nurse throughout training camp. The Raptors’ head coach is a little less Zen than he used to be. Instead of just going with the flow, this version of Nurse has been more meticulous, more of stickler for small details. VanVleet’s job is to be an intermediary, the bridge between the coaches and the other players, particularly the younger ones.

“I’m translating it,” VanVleet said. “I'm just trying to make it relatable… It's our job to just let [the young players] know that we trust Nick, that me and Pascal trust Nick, that OG [Anunoby] trusts Nick and the coaching staff, then these new guys don't have a choice. Coach is such [an] outside-the-box [thinker] in terms of the NBA fraternity, like he doesn't really follow any of the traditions or guidelines that most coaches do, so I think that some guys maybe just don't know how to decipher it or how to take it. And I think that's the one thing I've been trying to do is just be the [buffer] and let them know we trust him and that he’s a little weird at times, but he won us a championship, so he knows what he’s doing.”

While the team’s other foundational pieces, Siakam and Anunoby, are soft spoken by nature, this is a role that should come more naturally to VanVleet. He’s spent most of his adult life preparing for it. Admittedly, he wasn’t always the leader he is today.

“I was a terrible leader [growing up],” VanVleet said. “As a young kid I was just all emotion.”

VanVleet credits his mother and stepfather, as well as his high school coach, Bryan Ott, for helping him become more level-headed and to understand other points of view.

Lowry’s mentorship was also an important part of his evolution as a leader. From the moment VanVleet came into the league as an undrafted free agent, the veteran point guard embraced him and took him under his wing. He’s Lowry’s fitting successor. In his five seasons as a pro, he’s earned the respect of his peers, not just in Toronto’s locker room but also around the league.

He knows his leadership style isn’t for everybody. “I’m a little bit of a jerk,” he admits. He can be blunt. He tells it like it is, which is a commendable quality in a leader, but not one that is always well received by professional athletes in high-stress situations.

Still, as long as the shared goal is to win, he believes he can find a way to connect with anybody. If winning is not a top priority of yours, you probably won’t find much common ground with the Raptors’ point guard.

“We got a way of doing things around here and if you’re all about yourself and you don't really fit into the mould that we got you’re going to stick out,” VanVleet said. “Unless you're extremely good at your job to the point where we have to deal with it, then we will. But this franchise does a good job of hiring the right people, players and staff.”

There’s more to this crash course than teaching Nurse’s complex defensive schemes. It’s not just about learning X’s and O’s. They’re trying to show these guys how to be pros, show them what it means to be a Raptor.

Last year notwithstanding, it’s meant competing every night, holding each other accountable, sacrificing for the betterment of the team, and working to maximize potential, individually and collectively. It’s a culture built on character and chemistry. It’s a winning culture, or at least it was. Through the adversity of last season, some of that identity was lost. Now it’s on those who remain to get it back.

VanVleet doesn’t lack for confidence, but he’s also a realist at heart, and those qualities don’t always go hand in hand.

[I’m] a guy who feels like I can get whatever I want out there at any time, [but] I don’t know how many games I’ll win us if I was shooting the ball 30 times a game,” he said.

He wants to believe that anything is possible for this team, that he can lead them back to prominence, back to the pinnacle of the sport, but he also knows that will take some patience and a whole lot of work. Rebuilding what they had before is a process and it’ll take time. He knows there’s probably a limit to what they can achieve this season, but he doesn’t want them to know that. That’s part of being a leader, and he’s ready to lead.

“For me as a point guard, [I’m] just focusing on the growth of the guys, which guys need to get where, and just trying to be a part of that process,” VanVleet said. “If [we’re not a championship team right now] then we’ve still gotta build it up and I still gotta hold myself and my teammates to a high standard because that’s the best way to grow. But at the same time, it’s just realizing that every mistake isn’t the end of the world. It’s a weird dynamic because when you’re chasing a championship the way you deal with things is totally different than when you’re not. So, it’ll be a new experience, but for me, the only way I know how to do it is to go try to win every game possible and figure out what happens from there.”​