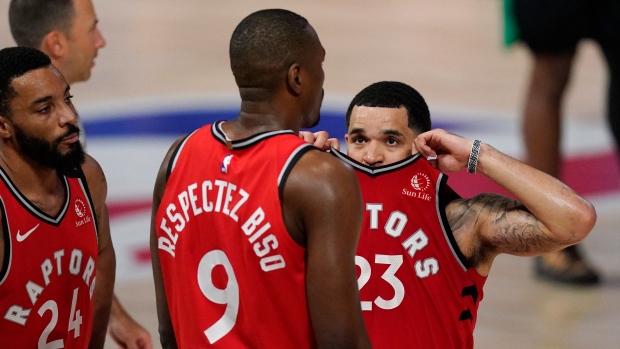 "I don't know if I find it that enjoyable, to be honest with you," said the NBA’s coach of the year, Nick Nurse, who was asked what it’s like to be in the thick of a neck and neck, pressure-filled playoff series ahead of the Raptors’ pivotal Game 5 against Boston.

"I’ve mentioned how hard work it is – even in between [games] and all the way through, and then when the ball goes up, it's like the fire goes up higher. But it’s not miserable either. I kinda just accept it as part of the job. It's really hard work, it's really high intensity, but you have to pull up your boots and do the job."

After scrapping and clawing their way back into a second-round series that seemed all but lost just a few days earlier, and with a chance to finally take control, the Raptors couldn’t get the job done.

Instead, it was Boston – fuelled by missed opportunities and a couple straight losses – that came out with the sense of urgency. It was the Celtics that threw the first punch, and then kept on punching. The Raptors, reminiscent of their blowout loss in Game 1, had no answer.

"I think the energy level of our guys, we kinda just weren’t with it tonight, which is disappointing," said Nurse, following his team’s 111-89 loss, which gave Boston a 3-2 lead in the series. "They looked faster, stronger and hungrier than we did."

The Celtics jumped on them right out of the gate. The Raptors were defending well enough early in the first quarter, but Boston’s defence was at another level – the best Toronto’s seen in the postseason, so far.

Toronto generated some good looks but couldn’t get them to fall. Then, before long, the ball stopped moving, the shots got much tougher, frustration set in, and the defence – their bread and butter and the thing they can usually rely on – fell apart.

OG Anunoby was the only Raptors starter to hit a field goal in the first quarter, where the team totalled just 11 points. By halftime, five Celtics had more points than any Toronto player. Boston’s lead, which was 27 at intermission, grew to as many as 30 points in the second half.

Until Matt Thomas and some of the reserves began chipping away at the deficit ever so slightly towards the end, it was hard to find a single standout or silver lining for the Raptors.

Pascal Siakam, whose offensive struggles are well documented but has generally been locked in defensively, got beat off the dribble by Kember Walker, Jayson Tatum and – far less forgivably – Brad Wanamaker early in the night. He was a complete non-factor on both ends of the floor, but at least he wasn’t alone in that regard.

Kyle Lowry – who had played so well in Games 3 and 4 – was oddly quiet throughout, Boston’s young bigs made the 35-year-old Marc Gasol look his age, and Fred VanVleet picked up three quick fouls and made some uncharacteristically poor decisions with the ball on offence.

If you thought it was hard to watch – and it was – it probably wasn’t a whole lot of fun to be a part of either (unless you were wearing a Celtics uniform).

After Lowry was issued a technical foul for arguing a call in the third quarter, Serge Ibaka voiced his displeasure with the Raptors point guard.

"Come on, we’re losing, man," he shouted, according to Ben Golliver of The Washington Post, who was on site. VanVleet had to intervene and calm Ibaka down. After the game, VanVleet said it looked worse than it was and called it a moment of frustration on a night that was frustrating for everybody. Nurse also picked up a tech.

"I would say that I am a bit of a rollercoaster," the Raptors head coach had said before the game. "Sometimes I can look calm as can be over there, and sometimes not. I think if you’ve watched me coach you could probably draw that conclusion yourself."

It’s been a strange series. Games 2 through 4 were competitive and hard-fought on both sides – all good indications of how evenly matched these two teams are when they’re at their best. Toronto outscored Boston 303-298 in winning two of those three contests.

Games 1 and 4 have been blowout wins for Boston – an indication of how razor thin the margin for error is against a team this good. The Celtics are beatable, and the Raptors know it now, but they’re not going to give you an inch unless you earn it.

"It’s probably the worst place to be – not making shots and not getting stops, that's a recipe to get you down 30," VanVleet said. "That’s just the way it went tonight. Nothing we can do about it now but get better and focus on Game 6."

The bad news for the Raptors, who had gotten their confidence back after evening the series with an impressive two-way performance on Saturday, is that game-to-game momentum doesn’t really exist in the playoffs. Each contest has its own feel and flow, adjustments are made, and the balance of power can shift in a hurry, as Toronto has been reminded on a few occasions in this series.

However, that’s also the good news. As bad as they were on Monday, they know that Wednesday’s Game 6 is a blank slate.

Lowry, who was the catalyst for the Raptors’ two wins in this series, vowed to be more aggressive than he was in Game 5, when the 90 minutes that he logged over the previous two contests may have taken their toll.

Momentum certainly didn’t carry over for the slumping Siakam, who finally looked like he may be turning a corner in the second half of Game 4, before having one of the worst nights of his career on Monday. Nurse took responsibility for some of it and said he needs to do a better job of getting the all-star forward involved early.

The Raptors have fared well in desperate situations before – as recently as Game 3, when they were a half-second away from falling behind 0-3 and facing certain elimination. Now, on the brink of actual elimination, they’ll have to dig deep again.

"Every single game is a different game," Lowry said. "It’s the playoffs, so you learn from it and make adjustments and continue to grow and figure it out. I mean, right now we’re at the brink of elimination, so we’re literally fighting for our lives on the basketball floor. It’s win or go home."​