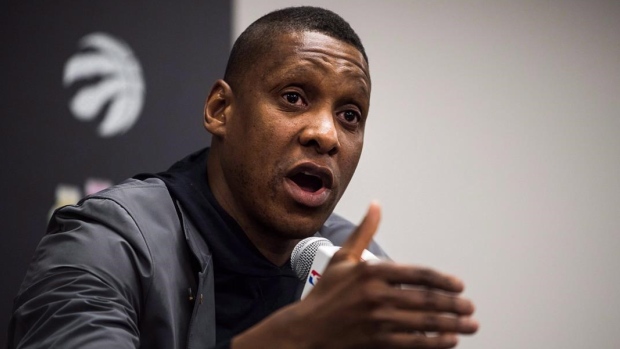 This close to the big night, the club’s primary decision makers would typically be back in Toronto, where they’d be overseeing the final set of player workouts at OVO Athletic Centre and putting the finishing touches on their draft board.

However, nothing about this year’s draft – which will be held virtually on November 18 – or the months leading up to it have been typical. Navigating around the restrictions put in place amid the COVID-19 pandemic, teams – as well as prospects and their representatives – have had to alter and adapt their preparation.

“It's very different than what we're used to, I can tell you that,” Tolzman said last month. “It's one of a kind and it seems like it's never-ending, to be totally honest with you. It's one of those things where we are doing what we can within the guidelines that the league has given us, and we're making the best of it. Thankfully, our scouting department, our front office is designed to not be too thrown off by these new ways of doing things.”

Under normal circumstances, the Raptors would workout upwards of 50 prospects at their facility in the weeks leading up to draft night – individually, in some cases, but mostly in small groups of five or six.

Although the team’s front office and scouting staff are generally well versed on each player by that point, having watched their games in college or internationally, this has always been a valued part of the pre-draft process. It gives them a chance to get a closer look at players of interest on the court – putting them through specific, and challenging, drills under the close eye of their development staff – and get to know them better off the court. That hasn’t been possible this year, though.

Until recently, teams were prohibited from visiting with prospects in person. The draft combine – usually held in Chicago in May – was cancelled. Instead, prospects were asked to drive to their nearest NBA market to undergo medical, strength and agility testing, the results of which would be distributed by the league. Contact between teams and prospects was limited to Zoom interviews.

Over the past few weeks, the league has loosened its restrictions. Now, teams are allowed to meet with a select number of prospects, but there are still some notable differences from the standard pre-draft process.

Instead of team-run group sessions, agents are putting their players through individual workouts that teams are able to watch, and instead of the prospects coming to the teams, teams have to go to the prospects. That’s what brings the Raptors’ front office to Los Angeles. With most of the agencies based on the West Coast, the L.A. area has become a hub for prospects. Many of them are a short drive away.

While team personnel would undoubtedly prefer to conduct their own workouts in their own buildings, this is the best that a less than ideal situation will allow for, while limiting travel and mitigating the risk of exposure as much as possible.

“When we have a guy in our building obviously they are on our turf, they put on our practice uniform, they go through our paces, our minor-league development coaches work them out, our head coach and assistant coaches are sitting courtside,” Engelbrecht said on Monday. “There’s a different level of, let’s say, intensity in the gym when you are doing a workout in your own facility.”

“One-on-0, it’s a unique thing. You are just focusing more on skill set and conditioning and their level of preparation for that moment. But in terms of competitive nature, who is going to push through a drill, who is going to out-compete somebody else, yeah, those are things you are just not going to have a chance to see and you are going to have to rely more on your past scouting and in-game scouting you have done throughout the year.”

That’s where their homework comes into play.

The Raptors are widely regarded as one of the league’s premier organizations at finding and developing young talent, and their track record under Ujiri and Webster more than justifies that reputation. They’ve been able to turn late first-round picks, second-rounders, and even undrafted free agents into valuable pieces of a championship core.

With the 29th pick – as well as pick No. 59 in the second round – this will be the first time they’ve owned their first-round selection since they drafted OG Anunoby 23rd overall in 2017. What they’re able to do with it – and what any team will be able to do with their pick(s) in this unusual draft – could depend on how confident they are in their process.

Like everybody else, the Raptors haven’t seen these prospects play a competitive game of basketball in nearly eight months. They won’t get to know any of them as thoroughly as they’d like to, or as they’re used to. However, they’ve been scouting most of them for over a year, and many of them for multiple years.

As Tolzman put it, without a standard pre-draft process, the decision the Raptors make in a couple weeks could come down to trusting their “gut feeling.”

“I don't wanna say [we’re in an] advantageous [situation] as much as we're not looking at it as a negative by any means,” Tolzman said. “The way that we do things to begin with, we don't need to change much of our operation. I think that we're a front office that spends a lot of time digging in on guys throughout the entire season, not just during the pre-draft. So a lot of the work we've done, it happened earlier in the year while the games were still going on, so we feel pretty comfortable with where things were at when everything got changed.”

Without a consensus first-overall pick, this year’s draft is not considered to be a strong one, at least not at the top, but it is believed to be deep. Tolzman estimates that there are 50 different players that the Raptors could consider with their first-round pick, which means there’s a good chance several of them fall to the end of the second round, with some likely going unselected. Given the circumstances, it could also be an unpredictable draft. Who’s rising up draft boards? Who’s falling? That’s hard to pinpoint without a typical workout season. Even the teams and their scouts aren’t quite sure how guys are currently being valued.

“It’s tough to get a consensus,” said Engelbrecht. “Guys in my business, we don’t really look at mock drafts. But there is generally a pack of people you’re constantly around [and] you talk about prospects, it’s natural, and you can start to get a feeling of where guys are going to go just based on the crowd. Not having that has been different. You kind of know who the [top] 40 players are, but you really have no idea what the order is. I think that kind of dovetails into strategy. If there’s somebody that you really like, it’s very difficult to put in a strategy to go get him because you have no idea where he’s going.”

When it’s all said and done, this draft – and what results from it over the coming weeks, months and even years – should give us a window into how teams were able to adapt in these strange and uncertain times. The Raptors are confident they’ll be among the teams to thrive.

“Honestly, we feel really comfortable with whoever we target and bring in,” Tolzman said. “We know that our development program is in place, regardless of what the season actually brings.”

“How it looks might be a little different, but in the end, a few months down the line, I think we’ll feel pretty comfortable with the trajectory that these guys are on.”​