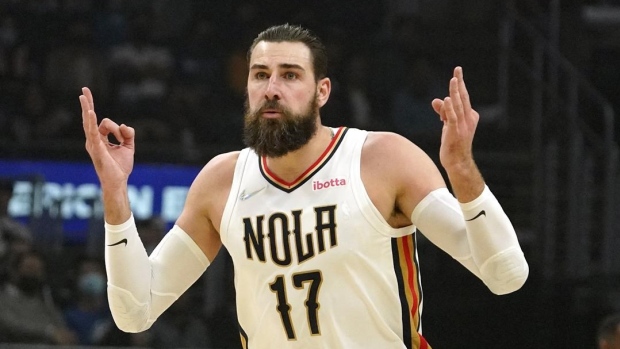 It was a Monday evening in late November, the Pelicans were in Los Angeles to face the Clippers, and the 29-year-old big man was having the game of his life.

With about five minutes left in the second quarter, Valanciunas set a screen for Brandon Ingram in the middle of the floor. Two defenders ran at Ingram, leaving the red-hot centre open at the top of the arc. Valanciunas took a step back and fired away.

As he ran to the bench, where he was greeted by his celebrating New Orleans teammates, he shook his head, as if to say ‘I can’t believe it either.’ Prior to this season, his first with the Pelicans, the 10-year vet had never made more than three three-pointers in a single game. That was his third in 66 seconds.

Valanciunas hit all seven threes that he attempted in the first half and finished the night with a career-best 39 points.

“That game was special,” said the big Lithuanian, humble as ever and still trying to downplay the performance more than a month later.

After the game, he was informed that his teammates were referring to him as “Dirk Valanciunas.”

This isn’t exactly the same JV that Raptors fans remember. He’s older, wiser, and yes, he shoots threes now. We’re not even at the halfway point of the season and Valanciunas has already hit 37 threes, a career-high. He’s attempted 86 of them, just five off his career mark set a couple years ago with Memphis. He’s shooting 43 per cent from long range, ranking 11th among NBA players that have taken at least 80 threes.

A decade into his career, Valanciunas is still evolving, still trying to find ways to adapt. As a seven-footer with the body and skill set of a traditional centre, he hasn’t had a choice.

“These days, the NBA has changed and you’ve gotta be versatile and you’ve gotta be able to shoot the ball,” said Valanciunas, who’s averaging a personal-best 18.6 points to go along with 11.9 rebounds this year. “I want to play in this league as long as I can and to help me do that, it’s adding the three-point shot.”

Perhaps his former team can take some credit for the player he’s turned himself into, though. Then an assistant coach with the Raptors, Nick Nurse used to go visit Valanciunas in Lithuania over the summers. They would spend a few weeks working on his game, with a focus on improving his lateral quickness and extending his shooting range.

“Honestly, it started with Nick, he helped me develop this,” Valanciunas said in an exclusive interview on The Raptors Beat, TSN Radio’s basketball show and podcast, this week. “He was the first guy who pushed me to do that, and I hope I’m going to use that against him on Sunday.”

“We had a lot of fun doing that stuff,” Nurse said. “He’s a really good shooter. I could see he had a great touch from 15, 16, 17 feet, great mechanics, he liked to work on his shooting and it was just a matter of saying, hey let’s go back here and do it.”

With the Pelicans travelling north to visit the Raptors this weekend, Valanciunas is getting set to play his first game in Toronto since Dec. 9, 2018, more than three years ago.

A lot’s happened since then. Valanciunas has been traded twice, first to Memphis and then to New Orleans, and he’s signed two new contracts. The Raptors won a championship a few months after swapping him for Marc Gasol in 2019. Then the pandemic hit, causing his 2020 trip to be postponed and eventually rescheduled in the Orlando bubble, and the 2021 meeting to be played in Tampa.

This isn’t quite the homecoming that he had hoped for or imagined. Like Serge Ibaka’s return to Scotiabank Arena on New Years Eve, and perhaps like Kyle Lowry’s coming up on February 1, Sunday’s game will be played without fans in the attendance, in accordance with the province’s COVID restrictions.

Folks who have been waiting to show their love and appreciation for the long-time Raptor and fan favourite will need to wait until next season, at the earliest, while Valanciunas won’t get the warm welcome that he so deserves. Still, after spending his first six and a half NBA seasons in Toronto, this is a game he’s had circled on his calendar.

“It’s been a while,” he said. “I’m really looking forward to going back and seeing how the city’s changed, what’s going on and see familiar faces. That was my home, my home on the court and off the court for seven years. It’s been a long time for me. Too bad there’s no fans and the situation is not [ideal] but I’m just excited to come back to Toronto.”

Selected fifth-overall in 2011, Valanciunas quickly became a key piece of the Raptors young core, which featured Lowry and DeMar DeRozan and would launch the most successful era in franchise history. He was the perfect solider, somebody that was always willing to sacrifice minutes and shots, or do the dirty work, for the betterment of the team.

He endeared himself to the fan base with his humility, sense of humour and hard play. They watched him grow from a 20-year-old kid who could barely speak the language, a fish out of water in a new environment, to a family man.

“That was my start, that was my beginning, and that was the longest time I spent in one spot,” he said. “It was not just [on] the court. It was my first year away from my home country. I started my family there, [had] my kids. This is something beyond basketball. I’m thankful. That’s why I’m so anxious to go back and see the city, feel that vibe again.”

The Valanciunas that returns on Sunday is in a different stage of life, both on and off the court. He’s seen most of his former Raptors teammates switch teams, in some cases more than once. In the span of two years he’s had to move his young family from Toronto to Memphis to New Orleans.

At 29, he’s the third-oldest player on a young Pelicans team that is still waiting for its best player, Zion Williamson, to make his season debut. They’ve shown some promise of late, but at 14-25 they’re still early in the development stage, similar to where the Raptors were early in Valanciunas’ career. Now that he’s 10 years in, he’s the vet, he’s the guy his young teammates look to for leadership, like he would look to Lowry and DeRozan.

“JV was a great teammate to me,” OG Anunoby said. “I used to sit next to him on the plane. JV’s a good friend. Good guy, worked hard, really talented, good person. He’s funny. What else can I say about JV? He’s just a good guy. He’s cool.”

A lot has changed, but deep down, he’s the same Jonas Valanciunas.

“Every time you step on the court you get some experience,” he said. “It’s on you how you use that experience. Are you going to use that experience to get better? I’m trying to take as much as I can every minute I play this beautiful game of basketball.”

“Things are changing really quickly. I was probably the youngest one [most of my] seven years I was on the Raptors. I’ve been the youngest one, I’ve been the one who’s willing to learn, willing to let somebody [else] lead, and things have changed overnight. Last year with Memphis I was one of the oldest ones, now here [with New Orleans]. I’m never going to lead by talking. I’m always going to lead by example – hard working, doing the little things, taking care of myself and taking care of my team. So I’m going to lead by example, that’s what I do, and I hope I can be helpful for somebody.”