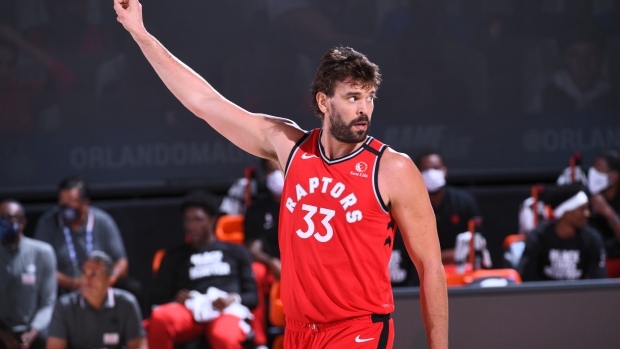 TORONTO – This isn’t how Marc Gasol imagined his long-anticipated reunion.

Initially, the Raptors were scheduled to face the Grizzlies in a pair of games late in the regular season. The two teams haven’t met since exchanging big men ahead of the trade deadline in February of 2019.

Gasol was supposed to make his first trip back to Memphis – where he spent 10 and a half seasons, blossomed into an all-star, won Defensive Player of the Year, and became synonymous with the organization – on March 28, with Jonas Valanciunas and the Grizzlies visiting Toronto a couple days later.

Both centres had those dates circled on their calendars ever since the schedule was released last August, but plans changed when the COVID-19 pandemic forced the league to hit pause on the campaign in early March. Those games were never played.

Now, the lone meeting between the Raptors and Grizzlies will come on Aug. 9 in the NBA’s Disney bubble – a long ways away from the city that Gasol has called home for more than half of his life and will always hold a special place in his heart.

"I got there when I was 16 years old, it was my first time out of Spain," Gasol said, via videoconference from Orlando on Saturday. "Imagine what it meant for me to go to high school there as a teenager and [then leave] as a father of two kids. My youngest actually is from Memphis. He was born in Memphis. And my daughter, their best friends are from Memphis and so on."

"My ties to the city and my roots go pretty deep. My love for the people there, and what they mean [to me], and for the franchise, it’s forever."

Gasol moved to the Memphis area with his parents in 2001, when his older brother Pau was drafted by the Grizzlies. His family still own their first home in Germantown, Tenn. He played high school basketball at Lausanne Collegiate School in Memphis.

He was selected by the Lakers in the second round of the 2007 draft and then, ironically, traded to Memphis for his brother. The Grizzlies were the only NBA team he had ever known before he was dealt to Toronto last season.

Gasol was the face of the most successful era in the franchise’s 25-year history. He led them to seven straight postseason appearances, which included a trip to the Western Conference in 2013. He made three all-star teams and established himself as one of the premiere defensive players in the association.

But with Gasol getting older and wanting to compete for a championship, and the team getting younger and looking to rebuild, both player and organization knew it was time to move on. The trade was mutually beneficial. The Grizzlies added a young veteran in Valanciunas, who has been a good fit with their exciting new core of Ja Morant, Jaren Jackson Jr. and Canadian Dillon Brooks. Meanwhile, Gasol’s leadership and basketball IQ helped guide Toronto to its first NBA title.

"He’s just all about the right things, which is first and foremost winning," said Raptors head coach Nick Nurse. "He wants to win and he wants to be seen as the guy who really knows how to play the game, plays it the right way. He’s a great teammate and a high-level sportsman."

At 35 and at the backend of what could be a hall-of-fame career, Gasol will always appreciate the experience that trade has given him – finally winning a ring and having a chance to compete for another before becoming a free agent during the offseason – but that doesn’t change the way he feels about his time in Memphis.

"All of our memories are there," said Gasol, who will have his No. 33 hanging in the rafters of FedEx Forum one day. "You don’t erase all that just because you move and have to work somewhere else."

Gasol was a Grizzlies fan before he put on the jersey and he remains one even after exchanging it for a Raptors uniform. He still follows the team, keeps in touch with his former teammates, and is proud of what this next generation is building and how quickly it’s coming together.

This Memphis club, which wasn’t expected to compete for the playoffs this year, is holding onto the eighth seed in the West. They’re a half game ahead of streaking Portland and, at minimum, should have a chance to earn their spot through the play-in tournament. Friday’s contest – and each one after that – will be crucial for them.

Gasol remembers his early years in Memphis, establishing an identity with Mike Conley, Zach Randolph and Tony Allen, and he can see this next group doing something similar.

Meanwhile, many of those qualities that made those old Grit and Grind Grizzlies teams so good, are also characteristics the defending champion Raptors currently possess.

"It was a team effort," Gasol said of those old Memphis teams. "Everyone that was brought in, they understood what it was about and how we were going to play and approach each and every single game. That’s just the way we worked. We were never afraid of anybody. Didn’t matter how many national TV games [we got], it didn’t matter how many lobs [you threw] or MVPs you had. You had to come and not only beat us but beat us down. We would not give up, ever."

"It’s not a coincidence that he's a part of both groups," said Fred VanVleet. "He's a big part of what we do here and he makes a lot of things possible. I don't know if he cares that much about praise but I'm lucky to play with him and I know he's helped my career tremendously."

It’s unclear when Gasol will finally make his return to Memphis as a visiting player, or if he’ll even be with the Raptors when he does.

He’s disappointed that Friday’s game can’t be played in the city he calls his second home, or in front of the fans that have meant so much to him and his family, but he also admits that it wouldn’t have been easy for him if it were.

"I’m somebody that really locks in to play and it’s not easy to say hello to all the ushers and all the people who work around the team and then try to execute the game plan and beat the other team," Gasol said. "It’s not as simple as it seems. There are a lot of emotions. I’m very business-like when it comes to playing and I would not like all the [attention] before a game. I like to just go there and play the game, win and then we can chitchat."

"Obviously it's a little bittersweet that we couldn't play in the city of Memphis, to get [him] that love and feel that love from the fans," VanVleet said. "But I'm sure he'll be happy to see some familiar faces and a lot of the people that he spent a lot of time with over the years. [We’re] talking about one of the biggest staples for a city and for a franchises over the last 10 or so years."​