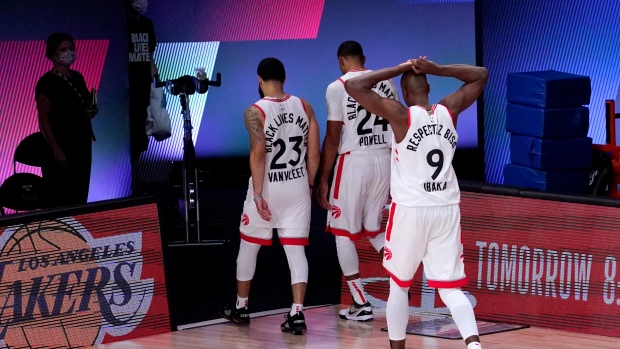 "I was talking on the radio show in Boston and they asked why don’t you impose your will all the time," Stevens said ahead of Wednesday’s Game 6, which the Raptors would go on to win in a double-overtime thriller for the ages. "Well, the other team is out there, too. In the very best games, both teams are imposing their will to the nth degree, and those are the special games that people talk about for a long time. That’s just part of the playoffs. It’s fun."

That’s how most of this thing felt. It was a battle of Eastern Conference heavyweights, two tough, evenly matched teams fighting it out until the very end.

In the end, though, the Celtics fought harder, played better, and won. They deserved to win, too. In the end, the Raptors – a team that spent the entirety of an extra-long and super strange season overachieving – felt like they underachieved, and they probably did.

We never saw them at their best in this series. They didn’t come to play in the opener, or in Game 5, their offence was often a mess, their all-star and future face of the franchise was a shell of himself, and in many ways, they beat themselves with turnovers and unforced errors in a very winnable Game 7 on Friday.

Even still, through sheer will at times, they gave themselves a chance and, fittingly, went down swinging.

"It was an unbelievable battle, man," said Kyle Lowry, following his team’s 92-87 loss to Boston, who will advance to face the Miami Heat in the Conference Finals. "Those guys, they beat us fair and square. They played extremely hard. They made it tough on us. We made it tough on them. We had opportunities to win it. They came out and did their job and they won and they move on. For us, it’s sad that we had more to give."

It’s with mixed feelings that the reigning champions leave the NBA bubble – en route home to their loved ones after an emotionally draining three months in Florida. They can be proud of their remarkable season, while also feeling some understandable regret over its disappointing conclusion.

"When we look back on the entire season, and the work that we put in, I think we can be proud of ourselves," Fred VanVleet said. "But it's hard to feel that way right now with that performance we just had. All in all, I thought, I'm proud of the effort that our guys gave, especially coming off a championship and losing what we lost, and coming into this season, and [the only] people that expected us to be good were the people in our locker room. I'm proud of that part. But I don't have the most positive perspective right now after losing a Game 7 that I thought we had many chances to win. Feel like it's safe to give Boston credit, but probably gonna sit in this one for a while and just let it hurt for a while."

The Celtics scored 31 points off Toronto’s 18 turnovers in Game 7. There would be no redemption game for Pascal Siakam, who was a broken man offensively all series, committed five of those turnovers and scored just 13 points. Lowry – the catalyst of all three Raptors wins – was bottled up by Marcus Smart and Boston’s defence. In spite of it all, they were right there.

"Listen we didn’t play great in this series, there is just no denying that," said head coach Nick Nurse. "It’s almost hard to believe we were really within a possession of continuing on here tonight."

"It's gonna sting, I think any time that you're bounced out of a season in the playoffs, it does sting for quite a while. I was really really clinging to the notion that if we can find another game to win, and we did in Game 6, and if we can just get one more, maybe we would kind of round into some better play in the next series, or whatever… But we're out of games now."

There’s a lot to feel good about, though. The series showed their resilience and gave us some iconic moments – from OG Anunoby’s continued development and Game 3 buzzer-beater, to Lowry’s brilliance, to the gutsiness of the double-OT win that forced a Game 7 in the first place.

And then there’s everything that came in the many months before it.

It was an unusual campaign, on and off the court. They lost two starters from their championship club, including the Finals MVP, Kawhi Leonard. They were counted out as a contender by most, and even picked to miss the playoffs altogether by some. They faced a seemingly endless barrage of injuries to key players.

However, they overcame it all and were playing some of their best basketball of the year when the COVID-19 pandemic hit and forced the league into a four-and-a-half-month hiatus. Their season would resume but in a neutral location – at Walt Disney World Resort, more than 2,000 kilometres away from home – and amid something that was, and still is, bigger than basketball.

Through it all, this 2019-20 Raptors team brought a lot of people a lot of joy, at a time when they needed it the most. They were a fun team to watch and to root for, thanks to their hard play and endearing personalities.

They defended their title admirably, and against all odds. They exceeded almost anybody’s expectations, even if they fell short of their own. And, most importantly, they have inspired many in the way they’ve stepped up and taken on a leadership role in the ongoing fight for social justice.

It was a season, and they were a team, to remember.

"I’m actually really proud of them," said Nurse. "They represent the city, the country and the organization [well]. When you watch our team most nights, win, lose or draw you gotta come out of there saying at least those guys gave everything they have. And I think they do it at an extraordinary level. It’s an extraordinary level of commitment and desire and fight that they bring."