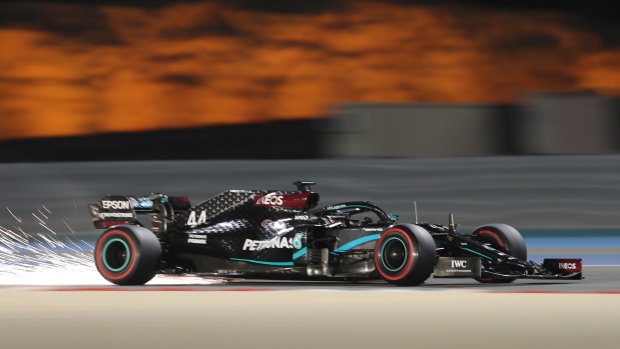 The seven-time world champion, who was also fastest in the first practice for Mercedes, overtook Red Bull's Max Verstappen at the top of the leaderboard late on in the evening session under floodlights.

Hamilton was .35 seconds quicker than Verstappen and .37 ahead of Mercedes teammate Valtteri Bottas on the 5.4-kilometre (3.3-mile) desert track, where races are usually held amid hotter temperatures in early April.

It was rescheduled because of the coronavirus pandemic, and there was even the rare sight of some drizzle.

The session was halted with about 40 minutes left when Albon made a mistake, losing the rear of his car when entering a corner. He slid off into the barriers, mangling the right side and rear of the car. A red flag sent drivers back to their garages while the badly damaged car was removed.

He has been under intense pressure to keep his seat at Red Bull next year and this error, made under no pressure, could work against him with only two races left to prove himself after this one.

Moments before the second practice restarted, a small dog sprinted across the track and made it safely to the other side before the cars were back on the circuit.

“Who let the dogs out?” Vettel sang on his race radio, mimicking the Grammy Award-winning song from Baha Men in 2000.

“If I had known dogs were allowed, I would have brought mine," he joked.

Bottas, meanwhile, had a brief problem with his steering wheel and had it adjusted.