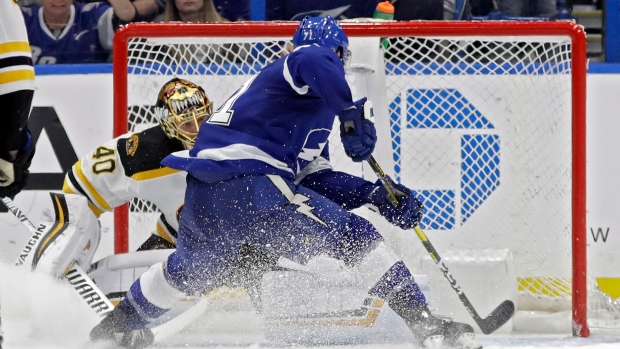 TAMPA, Fla. — It was a pair of players in their first full NHL season that sent the Tampa Bay Lightning to their latest victory.

Mathieu Joseph and Anthony Cirelli scored early in the third period and the Lightning won their fifth consecutive game by beating the Boston Bruins 3-2 on Thursday night.

"It's hard to play with a team with four lines rolling like this," Joseph said. "We're a team that has a lot of depth and it's huge."

Lightning star Steven Stamkos didn't get an assist on Cirelli's goal but played a key role by swatting the puck out of danger in the defensive zone with his glove after losing his stick. The puck went to Cirelli off a Boston player.

"I just saw a chance and went for it," Cirelli said.

Boston pulled to 3-2 on David Krejci's goal with 1:45 remaining.

Brayden Point also scored and Louis Domingue made 33 saves for the Lightning, who have the NHL's best record at 22-7-1.

David Pastrnak had a goal for Boston, and Tuukka Rask stopped 27 shots. The Bruins have lost three in a row and four of five.

Boston was coming off a dismal 5-0 loss Tuesday night at Florida.

"Tonight is a little more disappointing (than frustrating), to be honest with you," Bruins coach Bruce Cassidy said. "We were right there."

Point got his 21st goal, including seven over his last eight games, to tie it 1-all with 5:01 left in the first. Nikita Kucherov set up the goal with a backhand pass and has 20 assists and 25 points in his last 12 games.

Pastrnak got his 20th goal in his 28th game this season on a rebound 2:04 in. Jaromir Jagr — on four occasions — is the only Czech-born player to reach the 20-goal mark in fewer games.

Domingue made a pad save on a late first-period breakaway by Pastrnak, who went to his backhand.

"I was pretty lucky," Domingue said. "I probably should have known that he didn't have the room to cut to his forehand. Sometimes you've got to be lucky to be good."

Pastrnak also had an assist.

Boston activated defenceman Charlie McAvoy, who had been sidelined since Oct. 20 due to a concussion. The injury-depleted Bruins are still without centre Patrice Bergeron (ribs), and defencemen Zdeno Chara (lower body), Kevan Miller (throat) and Urho Vaakanainen (concussion).

"We weren't quite there yet, but much better than Florida," Cassidy said. "We had a few passengers. You can't afford that against the No. 1 team."

NOTES: Krejci tied Bruins president Cam Neely for 10th place in team history with 590 points. Neely was at the game. ... The Bruins claimed forward Gemel Smith off waivers from Dallas, sent D Connor Clifton to Providence of the AHL and placed Miller on injured reserve. Miller, hurt on Nov. 26, will be re-evaluated in four weeks. ... Tampa Bay D Anton Stralman (upper body) missed his 14th straight game and is not practicing. His status is being reviewed on a weekly basis.