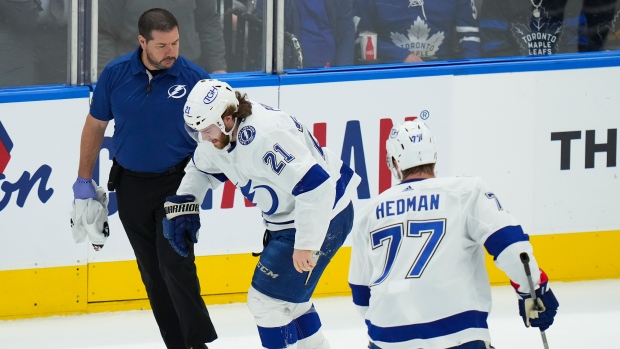 Tampa Bay Lightning star forward Brayden Point appeared to injure his right leg in the opening period of Saturday's Game 7 win against the Toronto Maple Leafs after falling into the boards awkwardly.

The 26-year-old took one shift early in the second period, but looked to be in significant pain before returning to the bench where he was consoled by teammates.

Brayden Point could barely skate on his first shift after the injury. His #TBLightning teammates are patting him on the back for trying to return. His head is down and he's emotional.

After the game, head coach Jon Cooper did not have an update on Point.

Cooper doesn’t have an update on Brayden Point.

The incident happened late in the first period during a race to the puck against Leafs veteran defenceman Mark Giordano. Point hobbled to the dressing room in pain without being able to put any pressure on his right leg.

Point scored the overtime winner in Game 6 to force a Game 7 in Toronto.

The native of Calgary has two goals and two assists in the series against the Maple Leafs after recording 28 goals and 30 assists over 66 games in 2021-22, his sixth season with the Lightning.