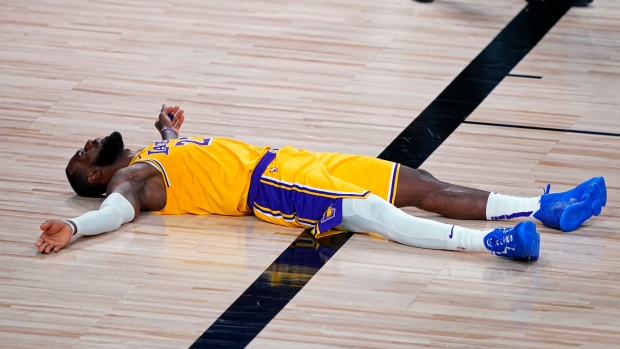 LAKE BUENA VISTA, Fla. — After sinking a deep 3-pointer midway through the final quarter, Damian Lillard did a little dance and teammate Jusuf Nurkic pointed to his wrist.

This was Dame Time, playoff edition.

“Every game since we’ve been here has been a playoff game. So that prepared us for a game like this," Lillard said. “It’s only one win. I’m happy to be here competing in the playoffs again, but we’ve got to move on to the next one.”

Lillard had 34 points and the Portland Trail Blazers spoiled LeBron James' first playoff appearance for the Los Angeles Lakers with a 100-93 victory on Tuesday night in Game 1 of the teams' playoff series.

James had 23 points, 17 rebounds and 16 assists, becoming the first player to have as many points, rebounds and assists in the playoffs. It was his 24th post-season triple-double and his assists were a career playoff high.

“We had a couple of breakdowns, which you can't have down the stretch, especially against a team like Portland,” James said.

Jusuf Nurkic had 16 points and 15 rebounds for Portland, which led by as many as 16 points in the first half. The Lakers, making their first playoff appearance since 2013, narrowed the advantage to 57-56 at the break and stayed close the rest of the way.

Trailing 78-75 going into the final period, the Lakers tied it at 78 on Kyle Kuzma's 3-pointer. James' layup gave Los Angeles the lead, and Kuzma added a pair of free throws and another layup to extend it to 84-78.

Lillard's 3-pointer tied it again at 87 with 5:46 to go and CJ McCollum's floater gave Portland the lead. Lillard said afterward he danced after his 3 because the song Blow the Whistle was played in the bubble arena, which Lillard called the “East Oakland anthem.”

After Danny Green's layup tied it again for Los Angeles, Lillard nailed another 3-pointer. Anthony Davis' dunk got the Lakers within 95-93, but Gary Trent Jr. made a 3-pointer that put Portland up 98-93 before Nurkic dunked to seal it.

Anthony Davis had 28 points and 11 rebounds for the Lakers.

Portland won the first play-in post-season NBA game since 1956, beating Memphis 126-122 on Saturday to make the playoffs for the seventh consecutive season. The Blazers were among three teams with losing overall records to make the bubble playoffs. No team below .500 had advanced to the post-season since 2015.

The Blazers were without forward Zach Collins because of inflammation in his left ankle. Wenyen Gabriel started in his place.

Portland led by 33-17 in the first half after Nurkic's dunk. The Lakers got within 40-38 but couldn't pull in front until Davis' dunk off of James' pass made it 50-49 with just over three minute left in the half. But it was short-lived.

The game was delayed for a time in the first half when the Lakers' rim got tilted and had to be adjusted.

Trail Blazers: Lillard had 48 points in Portland's 127-119 victory over the Lakers in Los Angeles on Jan. 31. So of course the Lakers were going to try to stop the bubble MVP. But that’s no different than every other game, Stotts said. “There’s not a lot that he hasn’t seen or that we haven’t seen,” Stotts said. ... Portland is also without Rodney Hood, who continues to rehab from an Achilles injury, and Trevor Ariza, who opted not to play in Florida.

Lakers: Rajon Rando is in the bubble and has returned to limited practice heading into the playoff, after being out with a fractured left thumb. Coach Frank Vogel said Rondo's "close, but we'll continue to evaluate it day by day."

RED HAT: James wore a familiar red had, but instead of the President Trump slogan, the “Great Again” line was crossed out and a line was added that made the hat read: Make America Arrest the Cops who Killed Breonna Taylor."

The series continues with Game 2 on Thursday.