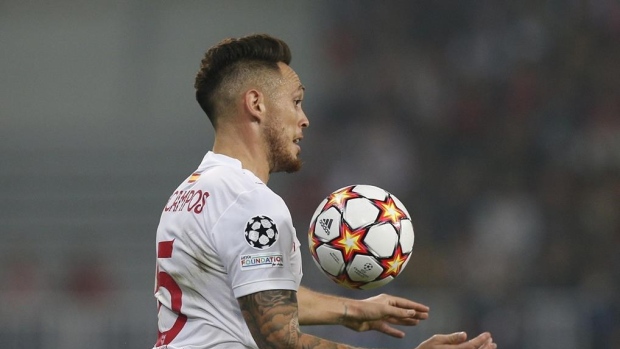 LILLE, France (AP) — Sevilla had the best chances to win in a tight and often dull game as it drew 0-0 at Lille in the Champions League on Wednesday.

Sevilla winger Lucas Ocampos went close with a curling shot saved late in the first half and a bicycle kick wide of the post in the second half.

Sevilla should have done enough to secure a first win, with striker Rafa Mir also having a shot saved off the line in the first half, but instead sits in second place in Group G with three points from three games. Lille is third with two points.

Austrian side Salzburg tops the group with seven points after beating last-place Wolfsburg 3-1 at home in the other group game.

Lackluster Lille created only one genuine chance when Portugal winger Renato Sanches profited from a first-half lapse in Sevilla’s defense, but he hit a shot straight at goalkeeper Yassine Bounou's chest with space to pick his spot either side.

Lille won the French league title last season but appears far less competitive or assured this season. Portuguese midfielder Xeka kept giving the ball away when he came on in the second half.

“When you play at home, you have to push more, really want to score, to win,” Lille’s veteran captain Jose Fonte said. “It’s a little frustrating when we think about how it was last season. We have to keep working to find the dynamic and strength of last season.”

“We had a lot of situations where we could have scored. They had one (chance) when we lost a ball and I don’t remember another in the whole match,” he said. “I thought we had enough chances, but we lacked precision in the penalty area.”

Yet perhaps Lopetegui was too conservative in his thinking, considering the talent he had on the bench.

He only brought on attacking midfielders Ivan Rakitic and Erik Lamela after the midway point of the second half, with Papu Gomez not long on the field, but the trio had little time left to make an impression.