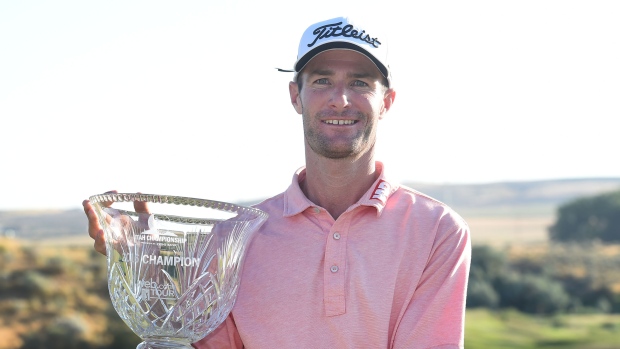 LEHI, Utah — Nicholas Lindheim won the Utah Championship on Sunday for his first Web.com Tour title and a likely spot next season on the PGA Tour.

The 31-year-old Californian closed with a 3-under 69 at Thanksgiving Point to finish at 15-under 269 and beat playing partner J.J. Spaun by two strokes.

"It's amazing. It's beyond belief," Lindheim said. "I don't even know. It's awesome. I'm very happy, and my family will be even happier."

Lindheim earned $117,000 to jump from 83rd to 14th on the money list with $153,694, with the top 25 at the end of the regular season earning PGA Tour cards. A self-taught player who took up golf at 19, he also has two career PGA Tour Latinoamerica victories.

Lindheim had three birdies in a four-hole span in the middle of the round and bogeyed the par-3 15th. He took a two-stroke lead to the par-4 18th and matched Spaun with a bogey.

"Honestly, I just tried to focus on breathing — that was my most important thing out there today," Lindheim said. "Regardless of what anyone else did, we're playing against the golf course. You can't control anything other than what you do, and I just kept that in the back of my mind. Lots of deep breaths, lots of thoughts of my family and knowing that this isn't make or break. This is something I chose to do. With that in the back of my mind, it really took the pressure off."

"It's still surreal," Spaun said. "Like I knew I could do it, just taking each week as it came. But to finally to get there and to feel that I'm locked up and not having to worry about being on the bubble at Portland, it's just a great feeling. It's going to totally free me up the rest of the year. It's just going to be about going out and having fun now."

Xander Schauffele was third at 12 under after a 65. Austin Cook was another stroke back after a 69.