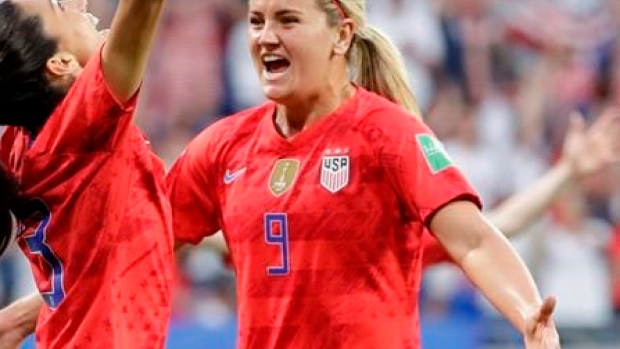 LYON, France — Midfielder Lindsey Horan hopes the attention on women's soccer and the United States' run at the World Cup boost the professional league back home.

The National Women's Soccer League is in the midst of its seventh season and has been more successful than any other attempt at a pro women's league in the United States. But the NWSL has seen recent struggles with slow growth, a need for sponsors and a lack of television exposure.

Horan, who plays for the NWSL's Portland Thorns, hopes the league experiences a World Cup bump — both for the rest of this season and beyond. She'd like the league to see the success of the Thorns, who average crowds of around 17,000 a game.

"Hopefully it grows, hopefully we get more teams, and more people buy into us and realize how important it is for the women's game — and that our NWSL gets better and better so we can get better for our national team," she said.

The league got some positive news earlier this week when ESPN announced it will televise 14 matches this season, the network's first NWSL broadcasts since 2014. Eight games will be broadcast on ESPN News and six on ESPN2, including both semifinals and the championship on Oct. 27.

The NWSL and A+E Networks terminated their broadcast agreement in February, leaving the league with no TV partner. Last season, a game aired each week on the Lifetime channel. A+E surrendered its stake in the league, but Lifetime remains a jersey sponsor.

"I was pretty annoyed that we didn't have a (television) deal at the beginning of the year. It almost felt like we were going backward," Horan said. "So I think this should have come a while ago, but I'm very happy that it did."

But it's not just the NWSL. Horan would like to see women's soccer lifted globally in the wake of the World Cup. The defending champion U.S. national team plays the Netherlands on Sunday for the title.

Following high school, Horan headed overseas to play in France for Paris Saint-Germain for several years. She moved back to the United States to join the Thorns in 2016. Fellow Thorns Tobin Heath, Emily Sonnett and goalkeeper Adrianna Franch are also on the U.S. squad in France.

National team players are allocated across the league's nine teams and U.S. Soccer pays their salaries.

Horan, who has 74 appearances with the national team and 10 goals, came off the bench for the team's first two knockout matches between Spain and France, before starting in the 2-1 U.S. semifinal victory over England. She served Alex Morgan the go-ahead goal.

"I think after the semi I was very emotional, that's because this has been everything a little girl's dreamt of, and that goes for everybody on the team," she said. "I think at that moment we won and the whistle was blown it was so surreal and all the emotions kind of came out. Now it's just realizing this is real and now we still have a final to go push for. This tournament's not over."

Horan jokes that because of her time in France she's the best French speaker on the team, throwing a bit of shade at Alex Morgan, Megan Rapinoe and the others who have also played for club teams in France.

She's clearly having the time of her life.

"Absolutely," she said. "I think this obviously has been the best experience of my life. Playing in a World Cup and doing as well as we've done, it's been absolutely amazing."