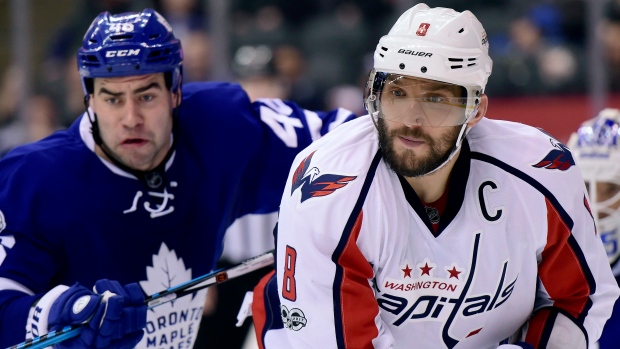 The more I have looked at the data, the more I become convinced that matchups really do matter. Teams that have gotten the better of their playoff opponent during the regular season have won the respective playoff series about 65 per cent of the time. That’s not insignificant.

If you subscribe to the theory that coaches are reasonably predictable and that the guys they have given significant ice-time to during the regular season will have significant ice-time during the playoffs, then you can start breaking out how specific lines may fare against other lines. The same is true for the defensive pairings.

So below, for each of the playoff series featuring the Canadian clubs, I’ve created matchup heat maps. The road team is going to be at the top of the grid, and the home team is going to be on the side of the grid. And how you read it is pretty simple – if you see a lot of blue, then the road-team (plotted horizontally) has an advantage. If you see a lot of red, then the home team (plotted vertically) has an advantage.

To define advantages, we’ll look at the average score-adjusted Corsi% for each line and each pairing over the course of the season. The larger the variance, the darker the color.

Let’s start in the Eastern Conference with the Montreal/New York series: 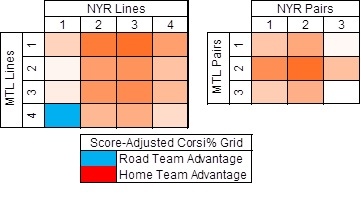 It’s hard to look at this, combined with the road team disadvantage and Carey Price factor, and think they aren’t anything but a sizable underdog here. The Rangers, for the second-year in a row, have resorted to mostly getting by on the merits of being a successful counterattacking team. And make no mistake, the Rangers are quite good – maybe the best across the NHL – in shelling up in the defensive zone, waiting for you to make a mistake, and unleashing a load of agile skaters on the rush the other way.

But at the end of the day, Montreal is just simply a better team. Their power – Alex Radulov, Max Pacioretty, Alex Galchenyuk, Brendan Gallagher, et al. – have turned in monstrous seasons and are consistently hemming opponents into their defensive third. They have been able to smooth out the talent across multiple lines, and although the Rangers are a fantastic skating group, the Canadiens are too. The Rangers really needed to draw up against a team where they could unleash their speed on a top-heavy opponent that didn’t have such competency down the lineup. Unfortunately, this match-up isn’t it. 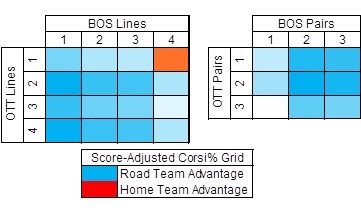 There’s usually something funky going on when the sports betting market has the road team – in this case the Boston Bruins – as a near 2-to-1 favorite in their matchup.

And the reason for this is pretty simple – Boston’s a great hockey team. I argued just last week that they would be the one “lower seeded” team that I’d actively try to avoid in the first round, and Ottawa didn’t have much luck with Toronto’s regulation loss to Columbus on Sunday.

The statistical argument for the Bruins is reasonably simple. They have dominated territorially at 5-on-5, but didn’t see it materialize to a favourable goal advantage until later on in the season. If the Bruins get even decent goaltending, they become an immediately credible threat in the Eastern Conference.

So naturally, from a matchup perspective, this looks pretty one-sided. The Bruins have arguably the best line in hockey and their depth has been quite productive, especially in the forward ranks. (I think the best way to argue this is pointing out how none of David Krejci, David Backes, Drew Stafford, Matt Beleskey, and Ryan Spooner play on the team’s top line. These are all very productive attackers deployed comfortably in secondary or tertiary roles.)

If you are Ottawa, the reality is you are probably out-matched at the skating level at 5-on-5. So is there hope? I’d say yes. Let’s remember that the above does not account for what should be a pretty serious goaltending advantage in Ottawa’s favour, nor does it account for the fact that the Bruins defence – specifically Krug and Carlo – are banged up and, at best, will see minutes in a very limited capacity. And hey, as good as Patrice Bergeron is, Ottawa probably has the best player in the series.

Maybe that’s enough. But make no mistake, the Senators are going to be in tough in round one.

Let’s finish up the Atlantic with Toronto heading out to Washington. 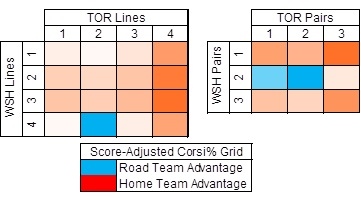 Funny thing about Toronto’s loss on Sunday to Columbus: not only did it force Ottawa into a tougher first-round matchup, but it did the same for the Leafs. And probably to a more significant degree.

The Capitals are an absolute buzzsaw at 5-on-5 and arguably have the most talented roster they have had in a decade. Their team is loaded with scoring depth and they added maybe the trade deadline’s most valuable piece in super puck-mover Kevin Shattenkirk. What you have is a very strong even strength team in the Leafs looking completely overmatched against probably the best team in the league. Tough way to break in a young roster for Mike Babcock, I’d say.

While the Leafs’ toughs are going to be out-matched against the Capitals’ toughs, it pales in comparison to how in trouble their depth issue is. I’m guessing Mike Babcock will really shorten his team’s minutes because otherwise you’re going to see Brian Boyle’s line – he’s been playing mostly with Matt Martin and Kasperi Kapanen – spending shift after shift in their defensive zone. The Capitals have no notable weakness in the forward ranks and regardless if it’s the top line or the fourth-line, they’ll have a very real edge against the Leafs’ lower groups.

One thing to watch: the Leafs have dedicated themselves to a blue-line balance all year, predominantly splitting the strengths of Jake Gardiner and Morgan Rielly. One of those two pairings – historically it’s been Gardiner, but we’ll see – is going to get some softer minutes with real opportunity. If that’s the only time the Leafs can push the Capitals back, then they’re going to need a monstrous effort from that group in order to make this series a contest.

Jumping out west to Edmonton and San Jose…

I think one of the reasons why the Sharks were so successful last year – and, really, for the last decade – is that few teams have had a good answer for their top-line. That’s just how good guys like Thornton and Pavelski are.

Well, the script is being flipped here, and not in a good way for Peter DeBoer’s team. The McDavid line in Edmonton has terrorized opponents all year by way of outrageous speed and sublime finishing talent, and I’m not convinced that even the great possession-minded Thornton line will have a good answer for McDavid’s group. And if it’s not Thornton who DeBoer hard-matches against McDavid, then fill in the blank: he’s going to run roughshod on whoever is pushed out there.

If you are Edmonton, where you are concerned is where you have been concerned all season long – McDavid and company simply cannot play the entire game, and the non-McDavid lines have been a work in progress. And I think there’s a strong argument to be made that the Sharks have the better blueline here, too. Most of those theoretical matchup combinations go in favor of San Jose.

What makes this a compelling series is that I think San Jose generally has the better team, but Edmonton has the best player. If San Jose starts hemorrhaging goals against the McDavid group, there’s really not a lot of hope for them in this series. My guess is almost all of the prep work heading into this is going to be designed toward slowing him down. 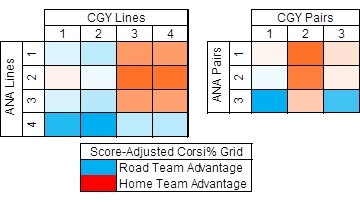 There’s a good story about the importance of depth here and although I really like the build of the Calgary Flames, you can sort of see where they get into trouble. Their third and fourth-lines really haven’t pulled their weight and defensively, despite having three mega-talented blue-liners, they really haven’t totally figured out how to deploy their group. (Dennis Wideman, by way of one example, has consistently been deployed as the team’s second-pairing defender with more EV ice-time than a guy like Dougie Hamilton).

If there’s any saving grace for Calgary, it’s that Anaheim is reasonably situated in the same manner. They have transitioned back to being more of a top-heavy team and that’s left them vulnerable when their stars are off the ice. I’m not sure it’s as dire as it is with Calgary, but the guys who have picked up that depth ice-time this year – including Nate Thompson, Logan Shaw, and Ryan Garbutt  – have struggled.

The power vs. power is the sell of this series, mostly because I think it’s a dead heat. At the line level, you have guys like Getzlaf and Perry going head-to-head with the likes of Johnny Gaudreau and, of course, the “3M” line. And if there’s any defender in the league that belongs in the same discussion with a superstar like Giordano, it’s a guy like Lindholm.

I think this is going to be a pretty tight (and extremely entertaining) series. Perhaps the best the first round has to offer!