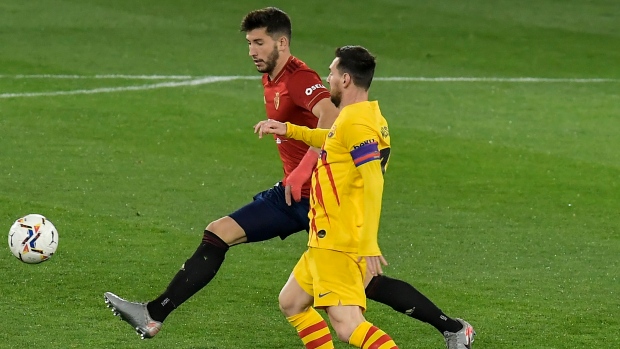 BARCELONA, Spain — Lionel Messi linked up with two generations of teammates to ensure that Barcelona will gain ground on at least one of its two Spanish league title rivals this weekend.

Barcelona won 2-0 at Osasuna on Saturday as Messi undid the hosts' disciplined defence on the half-hour mark when he repeated a pass that has led to plenty of goals over his career — sending the ball behind the defensive line to meet a darting run by Jordi Alba.

The 31-year-old left back, who has made a career of returning that initial through-ball back to Messi, this time sought his own shot and drilled a powerful strike right past the head of goalkeeper Sergio Herrera.

Messi then fast-forwarded to Barcelona’s future with seven minutes left in the match when he served as the link between two of the team’s 18-year-old talents. After receiving the ball from Pedri González, Messi quickly laid it off for substitute Ilaix Moriba to cut back to his left foot and curl a shot into the corner of the net.

Barcelona extended its undefeated run to 16 league matches to keep the pressure on Atlético a day before it hosts third-place Real Madrid in a Spanish capital derby. Atlético will also have one more game to play after this round.

Ilaix thanked Messi for the pass, and coach Ronald Koeman for the chance to play, after scoring his first goal for the team two weeks after his debut.

“From the first game, Koeman told me to look to score and that is what I did,” said Ilaix. “Messi gave me the pass and I don’t know how I cut back ... but I shot and it went in. I will never forget this. I will take this to my grave.”

Koeman arrived last summer to overhaul a team that had looked old and worn out when it finished the season without a title and capitulating 8-2 to Bayern Munich. Instead of promising immediate titles, he lowered expectations and focused on rejuvenating the team for years to come.

And that he has done.

Ilaix is the latest of a number of young players that Koeman has nurtured along, including Pedri, the injured Ansu Fati, Frenkie de Jong, Ousmane Dembele, Ronald Araújo, Óscar Mingueza, and Sergiño Dest.

“We are proud to give opportunities to the young players” Koeman said. “They are demanding a chance because they are the future of the club. It is important to bring some fresh air into the team. Playing for Barcelona, you are obligated to win, but if we can do so while introducing young players and the changes we are making, then even better.”

The win comes before Barcelona’s club members vote on Sunday for a new president, who will inherit a club with a ballooning debt and the task of convincing Messi to stay on when his contract expires this summer.

Barcelona’s good form in Spain will face an extremely tough test on Wednesday when it visits Paris Saint-Germain in the Champions League. PSG won 4-1 in the first leg of the round of 16 with a hat trick by Kylian Mbappe at Camp Nou.

After losing both games of its league-cup doubleheader against Barcelona in the last week, Sevilla was upset 2-1 by Elche.

Raúl Guti and Guido Carrillo scored for Elche in the 70th and 76th minutes, before Luk de Jong pulled one back for Sevilla.

“I am angry with our game,” Sevilla coach Julen Lopetegui said. “We were completely out of the match. We lacked heart. (But) there is no need to search for someone to blame. When a team is not playing well, the first one to blame is the coach.”

Eibar’s loss left it in in the relegation zone.