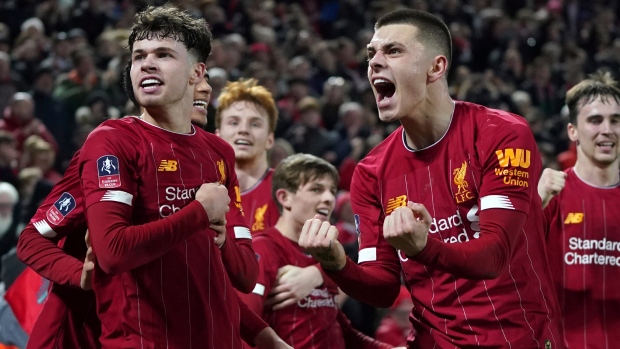 Canadian international Liam Millar started for Liverpool on Tuesday as the Premier League leaders, fielding its youngest-ever team, reached the fifth round of the FA Cup for the first time under Jurgen Klopp.

The German manager wasn't at Anfield to see it.

With Klopp determined that he and his senior players had the week off during English soccer’s new mid-season break, Liverpool put out a starting 11 with an average age of 19 years 102 days for the fourth-round replay against third-tier Shrewsbury on Tuesday.

The kids, led for the game by under-23 coach Neil Critchley, came through, winning 1-0 to set up a last-16 match they probably won't be playing in. It will be at Chelsea in early March.

Critchley said Klopp sent messages to the team before, during and after the match.

“He is delighted with the performance and the result,” Critchley said of Klopp.

An own-goal in the 75th minute settled the match and it was scored by Ro-Shaun Williams, a former youth-team player for Liverpool's fierce rival, Manchester United.

"WHAT A NIGHT," Millar said on Instagram after making his first-team debut.

Millar, a 20-year-old from Brampton, Ont., has won eight caps for Canada. He was 14 when he made his debut in the Canadian youth program in 2014 and 18 when he made his senior debut for Canada in March 2018. He represented Canada at last summer's CONCACAF Gold Cup.

The young Canadian forward returned to Anfield from a loan spell at Kilmarnock in early January and had been playing for Liverpool's under-23 side. He re-joined the Scottish side last August after signing a new deal with the Reds. He made 22 appearances with one goal for Kilmarnock this season before the clubs agreed to end his loan deal during the current transfer window.

He'd previously spent the latter half of 2018-19 at Kilmarnock.

Shrewsbury had few chances at Anfield but did have a goal ruled out by VAR for offside in the 58th minute.

The win keeps alive Liverpool’s chances of a treble. The Reds are closing in on winning the English league title for the first time in 30 years, and are through to the last 16 of the Champions League.

“These boys are in a phase of their careers where they need to keep learning and the developing,” Critchley said. "Hopefully the players see the benefit they have done in training with nights like tonight."

James Milner, one of the most experienced members of Liverpool's senior squad, trained with the youngsters on Monday and asked if he could be with them in the locker room before the game.

“He gave words of advice to the players,” Critchley said, "and I can’t thank him enough.”

Wayne Rooney is set for a reunion with Manchester United.

The former England captain scored for his new team, Derby County, in its 4-2 win over Northampton in a replay.

Second-tier Derby advanced to a home game against Man United, where Rooney spent 13 years and became the club's all-time top scorer while winning five Premier League titles, the Champions League in 2008 and the FA Cup in 2016.

Newcastle reached the last 16 for the first time since 2006, but was given a scare in its replay at third-tier Oxford.

Newcastle was 2-0 ahead through Sean Longstaff and Joelinton, but conceded goals in the 84th and then the fourth minute of stoppage time as Oxford took the game to extra time.

A brilliant solo goal by Allan Saint-Maximin in the 116th minute won it 3-2 for Newcastle , securing a match at second-tier West Bromwich Albion.

“When it went 2-2, I think everybody in the stadium and watching at home expected us to crumble,” Longstaff said, “but it just shows what we've got in the dressing room and a great spirit.”

The owners beat their tenants.

Second-tier Birmingham won 4-1 in a penalty shootout against third-tier Coventry, the club with whom it is groundsharing this season at its St. Andrew’s home.

Coventry, the 1987 FA Cup winner which now plays in the third tier after years of financial problems, failed to conclude a deal to stay at the club’s recent home, Ricoh Arena, with the stadium’s operators. So its long-suffering fans, who six seasons ago saw the team forced to play at the home of Northampton, have to travel 22 miles (35 kilometres) to watch their side play in Birmingham.

Coventry was the “away” team on Tuesday, having drawn 0-0 with Birmingham when it was the “home” team in the first match.

Birmingham scored in the second minute of second-half stoppage time to send the game to extra time at 1-1, and then equalized again in the last minute of the 30 extra minutes to force a shootout at 2-2.

Birmingham will play another central English team, Leicester, in the fifth round.

Reading beat Cardiff 4-1 in a penalty shootout after they drew 3-3 after extra time.