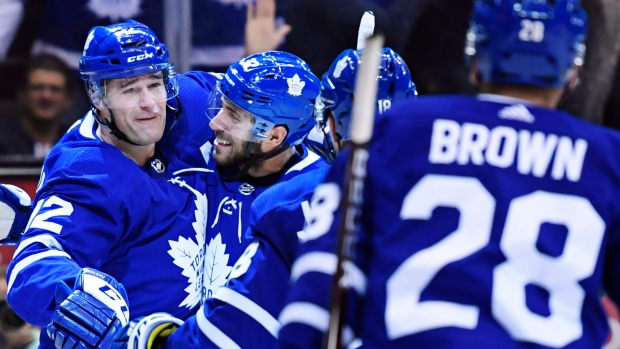 TSN Toronto reporter Mark Masters checks in daily with news and notes on the Maple Leafs. The Leafs (optional) and Panthers skated at Scotiabank Arena ahead of Monday's game.

John Tavares went down hard a​fter taking a cross-check to the back from Rangers defenceman Marc Staal in the third period on Saturday night.

“It was just one of those things where he gets you in the right spot and you just wait for some of that initial pain to subside – kind of like when you block a shot, same type of idea,” the Leafs centre said.

Tavares remained down for a few seconds and appeared to be in serious discomfort on the bench, but didn't miss a shift.

“I never felt too concerned that there was anything major, but certainly didn't feel very good,” he said with a small smile. "Just got me underneath my shoulder pad kind of in between my pant area, just in a good spot where’s there’s not too much protection or even too much muscle.”

Tavares looks to be in pain after being cross-checked by Staal. pic.twitter.com/v3EqQmL3sa

The regular season is a grind and shots like that can add up over time, taking a toll on a player. So, if you could, why wouldn't you spare your stars a little bit? Why not rest some workhorses if you have the chance?

It's a topic that the Leafs are considering at the moment. With seven games left, Toronto is seven points back of the Boston Bruins in the Atlantic Division standings while holding an eight-point cushion on the ninth-place Columbus Blue Jackets.

In the past, Mike Babcock sidestepped the issue of load management by saying his focus, and that of the team, was on securing a playoff position. But on Monday morning the coach at least seemed open to the idea of resting some veterans.

“It's a conversation you can have with them, for sure,” he said. “If you're in a spot you want to be in and you can do that. I've had lots of veterans over the years and I've had lots of different discussions. I've had guys even want to play back-to-back before they go in because depending on when you start – Wednesday or Thursday – there's a good break anyway. You're not used to that much time off. So, we'll just talk to them and make that decision based on what their needs are and how they feel and what their health is like.”

There are no shortage of candidates to get some extra rest, including 39-year-old left winger Patrick Marleau, who has seen his production slow this season, 38-year-old defenceman Ron Hainsey, who has seen his ice time increase since Toronto's defence was hit by the injury bug, and goalie Frederik Andersen, who is expected to make his 56th start of the season tonight.

You could even make an argument that Tavares, who has suited up in all 75 games so far and is averaging 19:04 of ice time per outing, could benefit from a game off.

“If you're healthy [enough] to play, I know just know from personal opinion, you want to play,” the 28-year-old said. “You want to go out and compete and that's the best way to keep your game sharp. It's obviously a balance. It’s not always the easiest decision.”

Getting some rest is all well and good, but what's the point if the team isn’t sharp to start the playoffs? The Leafs, for example, aren't firing on all cylinders right now having lost five of seven.

“The challenge for us is playing the best we can and feeling really good about ourselves,” said Babcock, “having swagger going in. We've talked lots about what we've been through, we've liked our game in the last three games – we really like our game. We just think our game has to improve. We'll get lots of opportunities to see lots of players right now and I think that's important as well so we can make the right decisions at the right time. It looks like our D is starting to get healthy and that's an important piece for us as well.”

In recent player polls by The Athleti​c (26 per cent) and the NHLPA (21.5 per cent) it was Florida's Aleksander Barkov getting the most votes in the most underrated category. But he's certainly not underrated in Toronto's dressing room.

“I think he's one of the top players in the league,” said Tavares. “His production speaks for it, but also the amount he's counted on in all areas of the game. Going up against him, the way that he uses his size, hockey sense and just his ability to understand the game at a very high level in all areas, he's a pretty special player.”

Barkov had a hat trick and seven shots in a win against Toronto on Dec. 15, but the Leafs have kept the Finnish centre off the scoresheet (and to just three shots combined) in two subsequent games (Dec. 20 and Jan. 18).

Scary moment as Chara and Barkov get locked up and Barkov goes face first into the ice. Luckily Barkov is ok #NHLBruins pic.twitter.com/bgYQjcd4t3

Barkov will be eager to get back on track tonight after having an eight-game point streak (19 points in that stretch) snapped Saturday against Boston. The Panthers captain struggled to breakthrough against Bruins defenceman Zdeno Chara, who tackled him to the ground at one point forcing Barkov's face into the ice.

“Of course it hurt a little bit,” Barkov said while sporting some stitches above his right eye. “I’m fine now. I didn't see what happened so I can't really say anything.”

So, he hasn't seen the replay?

“No, I haven't seen it and I probably don't want to see it,” he said with a smile.

Kasperi Kapanen is among the Leafs forwards struggling to regain his scoring touch. The speedy Finn has yet to pick up a point in three games since returning from a concussion. Overall, he has just one goal in his last 15 games.

Kapanen has used black tape on his stick in the last three games, but don’t be surprised if you see him change it to white soon. While many players religiously stick to one colour, Kapanen switches constantly throughout the season. He says his father, Sami Kapanen, had a similar approach although he didn't change quite as much.

Kapanen says he makes a gut decision before the game and will often switch things up if he feels like he needs to change his luck. The last time Kapanen scored, on Feb. 25 against Buffalo, he was using white tape.

When we caught up with the 22-year-old on Monday morning he still was not sure, which direction he'd be going in tonight.

And while he'd like to score, Kapanen can impact the game in many ways, including on the penalty kill.

After Toronto allowed a power-play goal in Buffalo on Wednesday, the Dr. Kill stick – a symbolic team-bonding tool that rotates among the penalty-kill players – went from Mitch Marner to Kapanen, who will now keep it until the unit allows another goal.

Toronto has surrendered only one power-play goal over its last eight games (17 times short-handed). That’s the team’s best penalty-killing stretch this season. But the Leafs will face a tough test tonight as Florida owns the second best power play in the NHL (27.3 per cent) with Keith Yandle quarterbacking things from the blue line.

"It starts with him," explained coach Bob Boughner. "He's the guy lugging the puck up the ice on the entries and we've been a good entry team, that's No. 1.  But, to be honest with you, those five guys all really bring their own strengths and attributes to that power play. Obviously, [Mike Hoffman] being the shooter gets a lot of attention from other teams, which opens some other things for us. I think [Evgenii] Dadonov is one of the best bumpers, middle guys, on the power play in the league. Barky, we've been asked a lot over the last couple years, 'Why don't you have him on the flank? Why is he not the shooter?' It's because he's so good around the net and takes the goalie's eyes away and his hands are unbelievable on second and third opportunities. So, all those guys have their own strengths."

Denis Malgin returns to Florida's lineup for the first time since Feb. 23 taking the spot of Colton Sceviour.

Mark Pysyk's wife just had a baby so he's out tonight with Ian McCoshen drawing in.