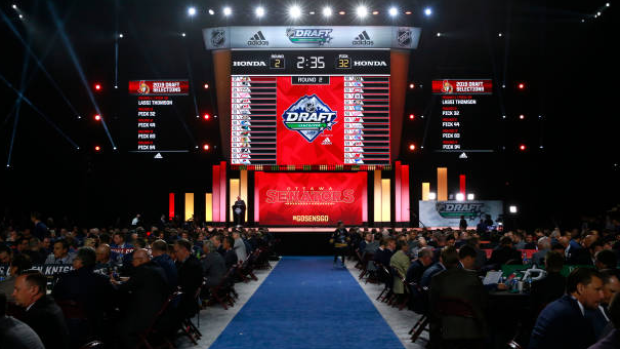 Prospect Logan Mailloux has renounced himself from this weekend's NHL Draft, asking teams not to select him following a criminal charge while playing in Sweden late last year.

In November, while he was playing for SK Lejon in Sweden with the OHL season paused by the COVID-19 pandemic, Mailloux was investigated after distributing a photo of a woman and himself engaged in a sexual act. The photo was taken without the women's consent.

According to a report in The Athletic last week, at least nine teams had already dropped Mailloux from their draft lists following the conviction.

The Athletic reported that the defenceman was fined for photographic activity constituting the invasion of privacy as well as defamation. "A summary punishment by fine has the same legal effect as a guilty verdict, i.e. conviction from a court,” a legal adviser for the Swedish Police told the Athletic.

"Being drafted into the NHL is an honour and a privilege that no one takes lightly. The NHL Draft should be one of the most exciting landmark moments in a player's career, and given the circumstances I don't feel I have demonstrated strong enough maturity or character to earn that privilege in the 2021 Draft. If I were to ever have the honour of being selected I would want a fanbase to be proud to welcome me to their organization. I know it will take time for society to build back the trust I have lost, and that is why I think it is best that I renounce myself from the 2021 NHL Draft and ask that no one select me this upcoming weekend. I feel that this would allow me the opportunity to demonstrate an adequate level of maturity and character next season with the London Knights in the OHL and provide all the NHL teams the opportunity to reassess my character towards the 2022 NHL Draft."

The league, however, responded that Mailloux is still NHL draft-eligible regardless of his statement. "There is no opting in or opting out - if he meets the standards in the CBA, he is eligible for selection," an NHL source explained to TSN on Tuesday. "That could only be changed by agreement with NHLPA. Not something we have discussed.“

Mailloux played four games for the London Knights during the 2019-20 season.