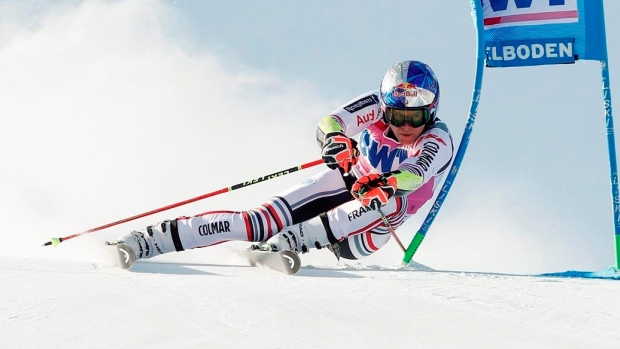 Pinturault defied fast-fading light in the second run to post a huge winning margin of 1.26 seconds over Filip Zubcic, the runner-up on back-to-back days.

First-run leader Loic Meillard could not give Switzerland its first win since 2008 in its classic giant slalom. A big error early in his run left him 1.65 back in third place.

“I’m pretty proud of it," said Pinturault, whose ski technician, Guntram Mathis, used to work with Miller. "It brings something really special into the story.”

The Frenchman seized the lead in the season-long giant slalom standings from home favourite Marco Odermatt, who placed fourth, 1.67 back.

Pinturault also extended his lead in the World Cup overall points race ahead of Aleksander Aamodt Kilde, the defending champion. Kilde’s results — fifth place, after fourth on Friday — were impressive for the speed race specialist.

Pinturault’s wire-to-wire win Friday had also been by more than a second, though he noted the light was more challenging Saturday. At Adelboden, the slope darkens quickly after the sunshine slips behind the mountains around 2 p.m. when the leaders start their second run.

Earlier Saturday, American racer Tommy Ford was airlifted by helicopter to the hospital after crashing hard near the finish line.

The United States team said Ford was conscious and talking to medical staff who treated him on the course.

Racing was paused for 30 minutes in the morning while Ford, one of the top-ranked skiers who wore bib No. 4, was treated. Zubcic and Pinturault were the next starters.

“It’s really hard when you’re on the start and you know that somebody on the field is injured," Pinturault said. “We are all close, all friends.”

The Adelboden giant slalom typically draws a noisy crowd of 25,000. There were no paying spectators Saturday during the coronavirus pandemic though racers were cheered on by people watching from neighbouring slopes and chalets.

The three-race meeting concludes Sunday with a slalom where Pinturault and Zubcic will start their fourth race in five days, after competing in Croatia earlier.