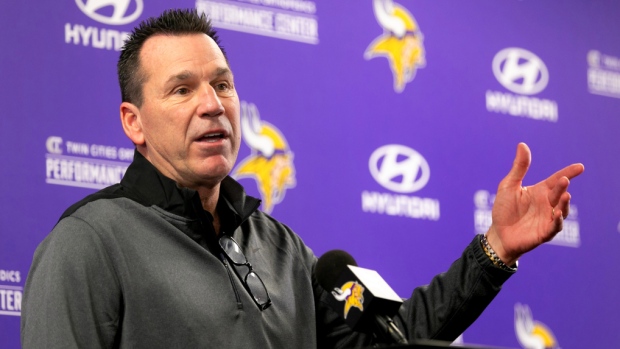 Gary Kubiak has called time on his long career.

The Minnesota Vikings offensive coordinator announced his retirement after  nearly four decades in the NFL on Thursday.

"It's been the honor of my lifetime to work for 36 seasons as an NFL player and coach," Kubiak said in a statement. "I've been on a football field for most of my life, and now I look forward to stepping away from the game and enjoying more time with my family and friends."

A native of Houston, Kubiak spent nine seasons in the NFL - all with the Denver Broncos - as a quarterback out of Texas A&M, retiring in 1991.

After two years as a running backs coach with his alma mater, Kubiak got his first coaching job in the NFL as the quarterbacks coach with the San Francisco 49ers, winning the Super Bowl in his first season. He returned to the Broncos the following season as offensive coordinator and spent 11 seasons in Denver - winning two more Super Bowls - before his first head coaching job materialized with his hometown Texans.

In eight seasons with the Texans, Kubiak posted a 61-64 record, winning two AFC South titles and two playoff games. He was fired with two games remaining in the 2013 season.

He returned to his familiar coordinator role the following season, this time with the Baltimore Ravens. Following a single season in Baltimore, he returned to the Broncos, but this time as head coach.

In his first season with the Broncos, Kubiak led the team to a 12-4 regular season, followed by playoff wins over the Pittsburgh Steelers in the divisional round and the New England Patriots in the AFC Championship and ultimately a 24-10 victory over the Carolina Panthers in Super Bowl 50.

Kubiak would step away from the Broncos head coaching job following the 2016 season, two years into a four-year deal, citing health concerns, but remaining on in an advisory role.

He returned to the field with the Vikings under Mike Zimmer in 2019 as an assistant and was promoted to offensive coordinator this past season. following Kevin Stefanski's departure to the Cleveland Browns as their head coach.

"Gary did a tremendous job with us at the Vikings over the past two seasons," Zimmer said in a statement. "I have a great deal of respect for him as a coach and as a person, and I'm glad I was able to coach with him. He has had one heck of an NFL career as a player, assistant coach and head coach, and I am really happy for Gary and his wife Rhonda as they head off to their ranch. We will all miss Gary at the Vikings organization and wish him the very best."