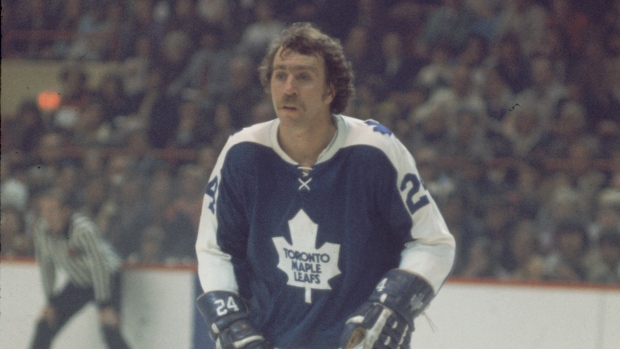 TORONTO — Brian Glennie, a hard-hitting defenceman who spent most of his 10-year career with the Toronto Maple Leafs, has died. He was 73.

Glennie, who was inducted into Canada's Sports Hall of Fame in 2005, helped Canada win Olympic bronze at the 1968 Winter Games in Grenoble, France, under Father David Bauer. The Maple Leafs confirmed his death on Friday.

"The Maple Leafs are deeply saddened to learn of the passing of Brian Glennie," the team said on Twitter. "Glennie was named one of the 100 Greatest Maple Leafs of all time and played over 500 games on the blue line in Toronto. Our thoughts are with his family during this difficult time."

Glennie was No. 94 on the 2016 list, part of the franchise's centennial anniversary.

Born Aug. 29, 1946, in Toronto, Glennie captained the Marlies to a 1967 Memorial Cup win on a team that included Brad Park and Mike Pelyk. He spent time at Michigan State before splitting the 1968-69 season with the minor-league Rochester American and Tulsa Oilers.

After nine seasons as a Leaf, he finished his career in 1978-79 with the Los Angeles Kings.

Over 572 career NHL regular-season games, Glennie had 114 points (14 goals, 100 assists) and 621 penalty minutes. He had one assist in 32 playoff games, all with the Maple Leafs. He played more games on the blue-line than any other Leafs in the 70s.

Glennie was easy to spot with a mop of hair and, then later in his career, a helmet that looked like a bowling ball.

While Glennie gave out hits, he also absorbed them and was on the wrong end of an infamous incident in 1975 at Maple Leaf Gardens after he was blndsided by Dan Maloney of the Detroit Red Wings. Irate at a Glennie hit on a teammate, Malone jumped the Leaf from behind, rode him down and then smashed him into the ice.

Knocked unconscious, Glennie was taken to hospital with a concussion. Maloney was charged with assault causing bodily harm the next day but was later acquitted.

Glennie took his tough guy style to the advertising world, joining forces with fellow Leaf Lanny McDonald for a Swanson's Hungry-Man dinner ad that saw Glennie rip the freezer door off to get his meal.

Glennie was named to the Canadian roster for the 1972 Summit Series against the Soviet Union, but was an extra player did not see action in any of the eight games.

The experience stayed with him, however.

"Probably the highlight of my career," he told CTV.

The role of reserve player was not for everyone, with some leaving. Not Glennie.

"I remember when they came to me and asked me if I was going to leave, I said there's no way I'm leaving this," he recalled.

A back injury forced Glennie to retire from hockey. Later in life, he moved to Ottawa to be closer to his grandchildren.

There was no immediate word on cause of death although he had been in ill-health. Funeral arrangements were pending.