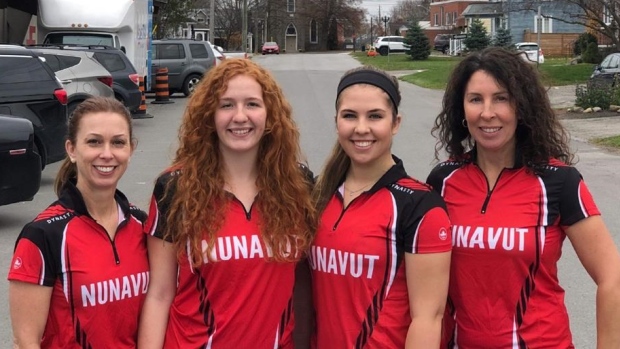 Chelsea Carey's team has a guaranteed spot in the 2020 Scotties Tournament of Hearts as Team Canada. Lori Eddy and her Nunavut teammates are the first to join the defending champions in the 16-team field.

Eddy will return to the national women's curling championship this season for the first time since representing Ontario with skip Alison Goring back in 1997. They reached the final that year in Vancouver before falling to the legendary Sandra Schmirler.

For her Scotties return, Eddy will be joined by third Sadie Pinksen, second Alison Griffin and lead Kaitlin MacDonald. They were unchallenged in Nunavut to secure a berth in the Feb. 14-23 competition at Mosaic Place in Moose Jaw, Sask.

"I know last time I went with the attitude of, 'Enjoy every second and have the best week of your life,'" Eddy said. "That's what happened and I'm hoping to just do the same thing."

Eddy, 48, has played on a number of different competitive teams since making her lone Scotties appearance. She has been a regular at the Ontario playdowns and most recently reached the provincial final in 2015 with skip Sherry Middaugh.

Eddy, from Dundas, Ont., also served as a fifth with Middaugh at the Olympic Trials in 2013. Jennifer Jones beat Middaugh in the final and went on to win gold at the Sochi Games.

Plans for her new team came together last June, when Griffin reached out to see if she'd be interested. Pinksen and MacDonald, who came up through Nunavut's junior program, were also on board.

Eddy, who also coaches McMaster University's varsity men's team, wanted to make sure they could put in the work with their various schedules to become a solid four-player unit. Once they hammered out a schedule for games and training camps, plans were a go.

"It's too good an opportunity to say no to," she said. "It's a challenge though and it's going to be a challenge."

The team held a training camp in Halifax before making its debut at a recent World Curling Tour event in Kemptville, Ont., posting a 1-3 record. Its opening game, a 5-2 defeat, was a stiff test against world No. 20 Isabella Wrana of Sweden.

"When we went upstairs with the Wrana team afterwards, they asked us how long we'd been playing together," Eddy recalled. "I took that as a big compliment because it was in fact our first game together. They were very surprised to hear that.

"The girls are great and they're super supportive. I feel like we all just want to learn and be better together. I feel like everybody has like-minded goals and that makes it a pleasure to be with them."

Another training camp followed in Ottawa — with Hall of Fame coach Earle Morris making an appearance — and another camp is planned for the post-holiday period in Eddy's hometown. The team will head to Saskatchewan before the Scotties for one last camp before round-robin play begins Feb. 15.

"We want to put in a good performance," Eddy said in a recent interview. "We want to make (teams) have to work hard to beat us. The goals are to be competitive and give everybody a good run and you never know."

In addition to her playing and coaching duties, Eddy also stays connected to the sport via the "2 Girls And A Game" curling podcast she co-hosts with Mary Chilvers, who played lead for the Ontario champions in 1997.

"We are just both so passionate about the game and we love it so much," Eddy said. "It's been so good to us."

Geneva Chislett skipped Nunavut to a 1-2 record in the 2016 Scotties qualification round and she went 0-3 in 2017.

The unpopular qualification format — or relegation — was dropped for the 2018 event, giving every province and territory a spot in the main draw. Import skip Amie Shackleton posted an 0-8 mark that year while Bodner went 1-6 last season.

Most of the provincial/territorial playdowns will be held throughout January, with some set to wrap up in early February.

In the Rings, a curling column, is published weekly.

This report by The Canadian Press was first published Dec. 17, 2019.