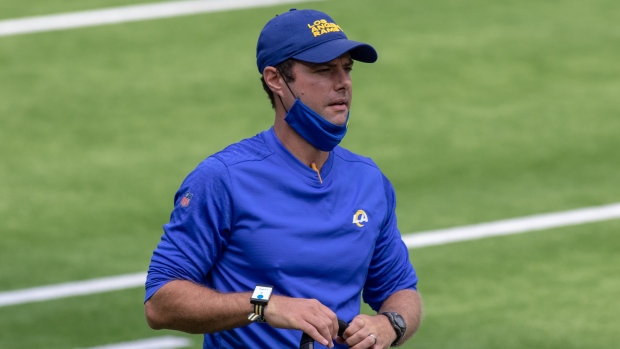 The Chargers made the decision Sunday after having a second interview with Staley. The interview was held a day after the Rams were eliminated from the playoffs with a 32-18 loss to the Green Bay Packers.

“It’s not just that Brandon possesses a tremendous football mind that makes him the ideal head coach to lead our team forward,” general manager Tom Telesco said in a statement. “It’s that he excels in the ability to effectively tailor, apply and communicate his concepts to players.

"It’s clear that Brandon will not be outworked. He’s the football equivalent of a gym rat, and that has earned him the universal respect of the players he has coached throughout his journey.”

The 38-year old Staley was in demand with interviews also scheduled with the Houston Texans and Philadelphia Eagles. He also had an interview with the New York Jets before they hired Robert Saleh last Thursday.

Staley, who will be formally introduced Thursday, replaces Anthony Lynn, who was fired on Jan. 4 after going 7-9 this past season. Lynn had a 33-31 mark in four seasons and led the Chargers to the divisional round of the playoffs in 2018.

The Los Angeles opening was widely considered the most attractive of the seven this off-season with plenty of talent on both sides of the ball. Quarterback Justin Herbert is considered the favourite for AP Offensive Rookie of the Year.

“It’s hard to put into words just how excited I am for the opportunity,” Staley said in a statement. “While this is certainly a dream come true, it’s also a dream that’s just beginning. There’s a reason this was probably the most sought after job out there — from ownership, to the fans, to the city, to the men in that locker room — it’s the total package."

Staley has been an NFL assistant for only four years. He joined the Rams this past season after being a linebackers coach with the Chicago Bears and Denver Broncos.

His impact on the Rams was immediate as he coached a unit that led the league in points and yards allowed.

He is the third assistant under Rams coach Sean McVay to get an NFL head coaching job, joining Green Bay's Matt LaFleur and Cincinnati's Zac Taylor.

Staley was one of six candidates to interview with Los Angeles. Buffalo offensive co-ordinator Brian Daboll, whose team will play at Kansas City in the AFC championship game next Sunday, was considered the front-runner until Staley's second interview.

“It doesn’t matter if you’ve known Brandon for five minutes or five years," president of football operations John Spanos said in a statement. "What quickly becomes apparent is the amount of energy and passion he approaches each and every moment with. The consistency of that enthusiasm is unique and, most importantly, it drives his ability to connect with people.

"His coaching journey to this particular moment is inspiring; if not for the sheer perseverance and determination of it all, then certainly for the dramatic results it has produced for the teams and players he has coached."