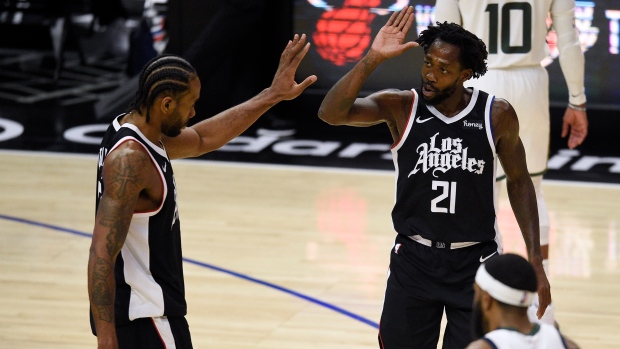 The Clippers avenged an 18-point loss to Utah two nights earlier, when starters Leonard, Paul George and Nicolas Batum were sidelined. George had 15 points in his return from a seven-game absence with an injured toe.

“I wasn't ready to play 30-plus today," said George, who was held to 26 minutes. “Got to get back to that basketball conditioning. I probably would have hurt the team if I'd been on the floor past the minutes I was.”

Donovan Mitchell scored 29 of his 35 points in the second half for the NBA-leading Jazz, who lost for just the second time in their last 22 games. Bojan Bogdanovic added 23 points, reserve Jordan Clarkson had 19 points and Rudy Gobert had 15 rebounds as Utah fell to 24-6.

“It felt like a playoff game, the intensity, the tough shots they were making all night,” Gobert said.

“This is a bump in the road and a good one,” Mitchell said. “We lost the game on the boards, that was second-chance points, which is what really hurt us.”

Gobert added, “If we get those rebounds we win this game.”

After not making any 3s in the third, the Clippers got timely 3-pointers from Marcus Morris and Patrick Beverley, who had two apiece in the fourth. Beverley's consecutive long-range baskets pushed their lead to 107-94 and finished off a 20-10 run. Los Angeles played without a centre in the fourth, when Morris was added to the rotation and scored 10 points.

“We might be small in size but we're not small in heart, for sure,” Beverley said. “Playing the No. 1 team, we got to go out and beat them. They’re not going to give it to you and that’s the mindset we came out with."

Trailing by 10, the Jazz weren't done yet. They closed to 112-110 on consecutive 3-pointers by Mitchell. Beverley and Leonard combined to make four straight free throws that kept the Clippers ahead 116-110.

George fouled Mitchell on a 3-point attempt, and Mitchell made the first two with 2 seconds to go. He deliberately missed the third and Royce O'Neale grabbed the offensive rebound but missed at the buzzer.

“We got our guys back and we wanted to win this game,” Clippers coach Tyronn Lue said. “Guys went out and did a helluva job.”

The Clippers led by 15 points in the second quarter and were up by 10 early in the third only to see the Jazz tie it up. Mitchell scored 12 of Utah's first 15 points, including seven in a row.

Neither team led by more than five points the rest of the third. Leonard, who returned after missing three games with a bruised leg, carried the Clippers with 14 points in the quarter after having just 12 in the first half. His pair of free throws sent Los Angeles into the fourth leading 79-75.

Clippers: Beat the Jazz for just the fourth time in the teams' last 13 matchups. ... Leonard was selected as a starter for the West in next month's All-Star Game in Atlanta. It will be his fifth career appearance, having been a starter each time. Last year, he was named MVP, scoring 30 points in the West's win.