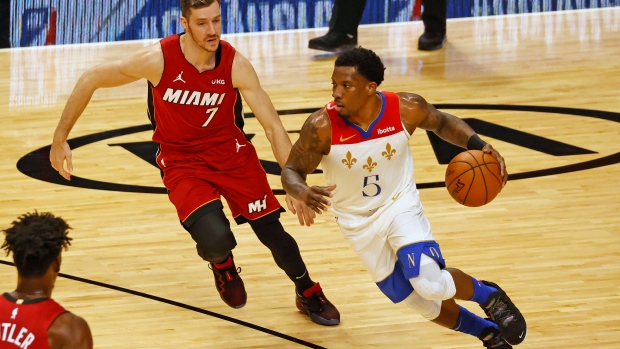 The deal saves the Clippers $30 million in luxury tax and creates an $8.3 million traded player exception they will have a year to use.

Bledsoe, 31, was drafted by the Clippers in 2010 and spent the first three years of his career with the franchise. A two-time member of the NBA's All-Defensive team, Bledsoe is expected to play a significant role in the Clippers guard rotation.

The trade gives the Grizzlies salary cap flexibility in the summer of 2022, when Bledsoe is guaranteed $3.9 million of the $19.3 million in the last year of his deal. Memphis has 16 guaranteed contracts now and will be open to trades for some of the players returning in this deal, sources said. The Grizzlies are open-minded on how they all might fit into the team, but Memphis already has a packed roster.

Beverley was a popular player with the Clippers, where he spent the past four years of his career. He lost his starting job to guard Reggie Jackson in the Western Conference playoffs. Both Beverley ($14.3 million) and Rondo ($7.5 million) are on expiring contracts for the 2020-2021 season.

Oturo was the 33rd overall pick in the 2020 draft and had been having a solid NBA Summer League with the Clippers. New Orleans traded Bledsoe to the Grizzlies prior to the July draft to create salary cap room, and Memphis had been working to move Bledsoe onto a new destination.

Bledsoe played in 81 games and started 25 games as a rookie but the Clippers acquired Chris Paul the following season, limiting Bledsoe's playing time. After three seasons with the Clippers, Bledsoe was traded to Phoenix. He played his best basketball in Phoenix, averaging 21.1 points and 6.3 rebounds in 2016-17.

He was traded to Milwaukee the following season but was dealt in a four-team trade by Milwaukee to New Orleans in a deal that sent Jrue Holiday to the Bucks in November of 2020. Bledsoe averaged 12.2 points and 3.8 assists in 71 games last season.

He will join a Clippers team that re-signed Jackson in free agency after Jackson shined in the playoffs. With Kawhi Leonard expected to miss significant time this coming season as he recovers from surgery to repair a partially torn ACL, Bledsoe gives the Clippers a player who has played in 71 or more games in three of the last four seasons.

Beverly was a fan favorite in L.A. due to his defense and hustle and was an emotional leader for the Clippers when they exceeded expectations and surprisingly made the postseason in 2018-19. Beverley, though, only was able to play in 27 games last season due to injuries.

Rondo was acquired from Atlanta at the trade deadline last season for Lou Williams and two second-round picks. The Clippers were hoping Rondo would give them leadership and playoff playmaking at point guard but the veteran played in just 13 playoff games and fell out of Ty Lue's postseason rotation during the Clippers' run to the Western Conference Finals.