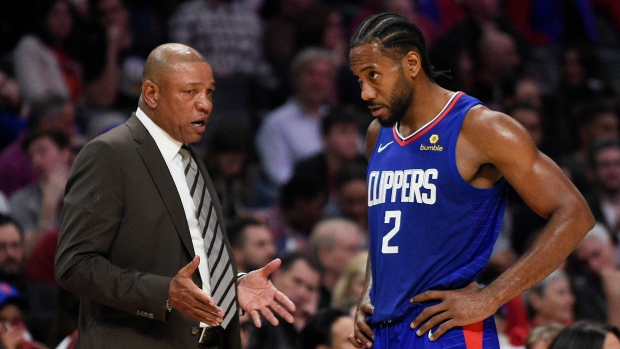 The Doc Rivers era with the Los Angeles Clippers is over.

Rivers confirmed reports that the team parted ways with their head coach after seven seasons on Monday.

"When I took this job, my goals were to make this a winning basketball program, a free agent destination, and bring a championship to this organization," Rivers said in a statement. "While I was able to accomplish most of my goals, I won't be able to see them all through. Though it was a disappointing ending to our season, you are right there and I know what this team is capable of accomplishing with your support. Thank you to all the players, coaches, and staff for helping us get here."

The Clippers blew a 3-1 lead against the Denver Nuggets and lost in seven games in the second round of the Western Conference playoffs earlier this month.

Rivers, 58, joined the Clippers in 2013 after nine seasons with the Boston Celtics with whom he won the NBA title in 2008.

The Clippers made the playoffs on all but one occasion under Rivers, reaching the conference semi-finals three times.

The team made a major splash last offseason in signing free agent Kawhi Leonard to a three-year contract and trading a package including Hamilton, Ont.'s Shai Gilgeous-Alexander and five first-round picks for Paul George. The Clippers finished the regular season as the No. 2 seed in the West, but couldn't get past the Nuggets.

As a franchise, the Clippers have never reached a conference finals.