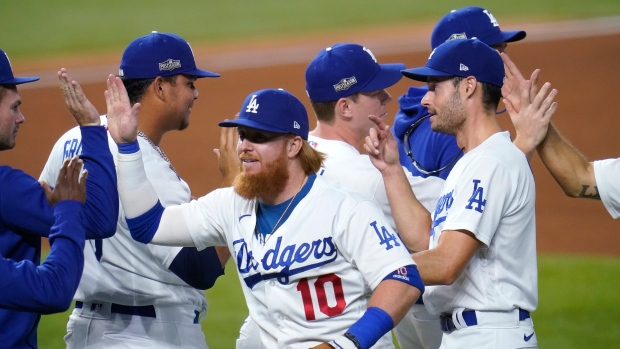 ARLINGTON, Texas — Manny Machado tried to awaken a slumbering San Diego offence by screaming at his teammates after connecting for a homer against Clayton Kershaw.

It almost worked, but the Padres fell into a 2-0 deficit in their best-of-five National League Division Series when Eric Hosmer left the bases loaded with a game-ending groundout against Joe Kelly in a 6-5 loss to the Los Angeles Dodgers on Wednesday night.

“It stinks that we just fell short there,” Hosmer said. “We’ve still got a life left. We come out tomorrow, take it one game at a time and hopefully turn this thing around.”

Machado's solo shot in the sixth inning was followed immediately by another from Hosmer, closing the Padres to 4-3 in their first NLDS since 2006.

Fernando Tatís Jr. hit a long drive off reliever Brusdar Graterol that would have put the Padres up by a run in the seventh, but Cody Bellinger robbed the 21-year-old phenom of a homer with a leaping grab at the wall in centre field.

Machado's outburst, starting when he threw his bat toward his own dugout after lifting a low pitch from Kershaw to left, was aimed at a San Diego offence that had been mostly silent for the first 14 innings of the neutral-site series at the home of the Texas Rangers.

The new retractable-roof stadium was where the Padres' record run of grand slams in four straight games started with Tatis' hotly debated homer on a 3-0 count with a seven-run lead in the eighth inning of a 14-4 win over the Rangers in August.

His near-homer aside, Tatis isn't making nearly as much noise this time, with just a single in eight at-bats in a pair of games started by Dodgers aces Walker Buehler and Kershaw. Machado was 0 for 6 before his liner into the seats in left field, although Tatis and Machado drew hard-earned walks from Kelly to give Hosmer a chance in the ninth.

Four pitches after Machado's long ball, Hosmer drove a fastball from Kershaw high into the Dodgers bullpen in right-centre. Machado was out of the dugout before the ball landed.

Mitch Moreland and Trent Grisham drove in runs in the ninth inning off Kenley Jansen, who struggled with diminished velocity. On the 49th pitch of the inning, Hosmer grounded a 1-2 knuckle-curve at the knees to second baseman Kiké Hernández.

“We’ve got to take some of that momentum we had the last couple of innings and we need to carry that into tomorrow,” Padres manager Jayce Tingler said. “It’s do or die for us. That’s the way it’s going to be the next three games.”

Zach Davies had the longest outing for a San Diego starter this post-season, but gave up four runs in five innings. The right-hander has allowed eight runs over seven innings in two playoff starts.

In a 5-1 loss in Game 1, San Diego became the first team to use at least nine pitchers in three straight games in the playoffs or regular season. Another bullpen-heavy game could be looming in Game 3, with both of the Padres' top two starters sidelined by injuries.

Mike Clevinger was removed from the NLDS roster Wednesday after lasting just two pitches into the second inning of Game 1 while dealing with an elbow issue. The right-hander can't return until the World Series, if the Padres get that far.

Dinelson Lamet left his final start of the regular season Sept. 25 because of biceps tightness. The right-hander has been left off the active roster for both post-season series so far.

Tingler said Adrián Morejón is set to start Game 3 in what would be the 21-year-old left-hander's first career playoff start. If there is a Game 4, right-hander Chris Paddack will make his second start of these playoffs.